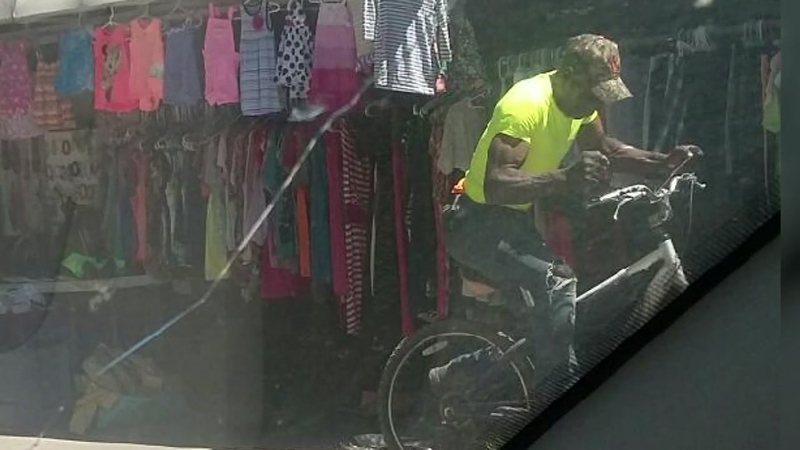 HOUSTON, Texas (KTRK) -- A 94-year-old woman has her wheelchair back, thanks to her younger, fast-acting neighbor.

Over the weekend, Ramona Rodriguez's 72-year-old neighbor saw a man on a bicycle break into her yard. Rudy Castillo wasn't just about to sit by and watch.

"I saw him open the little gate and went inside the house," said Castillo, who then grabbed his iPad and began recording. He captured a man wearing an orange shirt walk out of his neighbor's house, carrying Rodriguez's wheelchair. The man then jumped on his bike, and pedaled away.

"When I saw him, he had the wheelchair, I was recording it, I put my shoes on and went after him," said Castillo, who has lived in the neighborhood for more than 30 years. "I asked the guys if they saw a guy with a wheelchair and a bicycle and they said, 'Yeah, he went that way.'"

Castillo chased the wheelchair thief a few blocks away to a garage sale location. There, he had already put a yellow shirt on top of the orange shirt, and was trying to convince the woman running the garage sale to buy the wheelchair he stole.

That's when Castillo stopped, snapped a photo, and confronted the man.

"He took off right away, as soon as I took the picture, he got on his bike and took off."

Castillo was able to return the wheelchair to the very grateful Rodriguez, who gushed that her younger neighbor is always watching out for her and her elderly husband.

Castillo followed that up by calling Houston police. Officers were able to share the video he took with others. One of the HPD officers who worked in the neighborhood quickly identified the man on the bike as Michael Snipes, a name familiar to law enforcement.

HPD officers found Snipes loitering around a nearby Citgo gas station, and he was promptly arrested.

Turns out, Snipes had already been banned from going inside the Citgo, for allegedly, you guessed it, stealing.

"We tell him 'Why do you do like that?'" said Allauddin Momin, who operates the store. "You're young man, you can work, so why are you stealing this type of stuff over here?"

A quick check of court records show Snipes has a long list of convictions dating back more than 20 years. He is now charged with burglarizing Rodriguez's home, and is currently in jail on $40,000 bond.