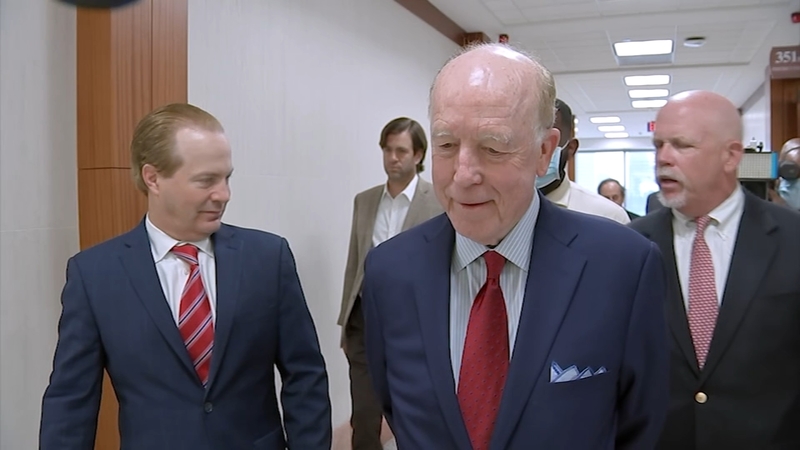 HOUSTON, Texas (KTRK) -- A new court filing this afternoon shows the Republican operative charged in a bizarre voter fraud investigation knew about the plan to crash into what turned out to be an innocent air conditioning repairman.

In October 2020, Dr. Steven Hotze funded The Liberty Center, a group to investigate voter fraud. According to court records, Mark Aguirre, a private investigator working for that group, surveilled and then ran his car into an AC repairman's truck, believing it was carrying thousands of fraudulent mail ballots. Aguirre allegedly held the repairman at gunpoint until officers arrived. There were no ballots in the truck nor were they found in a search of the repairman's property.

The private eye and Hotze were charged with aggravated assault in the incident.

Friday afternoon, the Harris County District Attorney filed a partial transcript of a phone call between Hotze and then U.S. Attorney Ryan Patrick. In the call, recorded on October 17, 2020, Hotze tells Patrick about the conspiracy, the planned traffic stop, refers to Aguirre as "my guy" and asks Patrick for help to crack open the ring.

"He's surveilled them. He's gone to their home. I mean, he's gone. He knows what's going on, they found the truck, they seen him go there, they been following him the last two days, in fact he told me last night, hell, I'm gonna have, the guy's gonna have a wreck tomorrow,. I'm going to run into him and I'm gonna make a citizen's arrest.... he (Aguirre) said they literally have boxes with thousands of votes in it and they're just taking these down and voting them. I mean, this is the way these guys operate, Ryan. They, the criminal ring is so incredible. Can you help out at all?"

Patrick said no help could be offered as the US Attorney doesn't have a staff of agents and any operation would have to be conducted under federal rules.

According to the transcript Hotze suggests getting a constable to assist before adding, "you know what? Aguirre's got enough balls that he would just, that he would go in and make a citizen's arrest."

Court records in the case suggest no law enforcement was present when Aguirre made the "citizen's arrest."

Hotze's legal team tells 13 Investigates, Hotze is innocent and in their words, the transcript further proves this is a politically motivated prosecution. Hotze's attorney Jared Woodfill sent a written statement Friday afternoon, "It is shocking that the Harris County DA would attempt to prosecute Dr. Hotze based on an incomplete recording that proves Dr. Hotze's innocence. The Ryan Patrick tape further demonstrates that the indictment of Dr. Hotze was politically motivated and that Dr. Hotze is innocent of any criminal or civil wrongdoing. We look forward to proving Dr. Hotze's innocence."

Former US Attorney Ryan Patrick had no comment this afternoon.

Note: After leaving the US Attorney's office and entering private practice, Ryan Patrick and his law firm, were hired to represent ABC News on an unrelated matter.