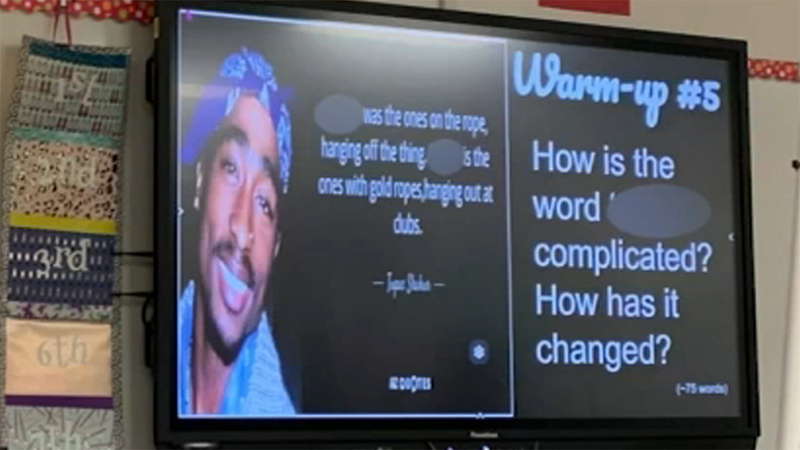 HOUSTON, Texas (KTRK) -- A Spring Branch ISD teacher has been placed on administrative leave and the district is apologizing for a slide she shared with a class on Monday that included a racist term.

A picture of the slide, which was shared on social media, read, "How is the word '(expletive)' complicated? How has it changed?" This was part of a "warm-up" activity in English class at Stratford High School in west Houston.

"Definitely, it wasn't the right thing to do," one student told ABC13.

"She could have worded it differently," another student said.

Stratford alum Marcel McClinton told ABC13 he was shocked about the situation.

"My heart sank and my jaw dropped," he said. "It makes me feel very embarrassed to have her as a teacher and to have graduated from Stratford High School. I feel as though Black and brown students in her classroom are not respected or valued and I know that personally, because I had her as a teacher for a whole year."

McClinton said he felt the teacher, who is white and is not being identified, targeted him because he's biracial. He said he complained about her but nothing happened.

In a statement, the school district said the teacher is on administrative leave given, "concerns with the professional judgment in her lesson planning and delivery."

"Inappropriate and offensive language was used," the statement read. "We deeply regret and apologize this incident occurred."

McClinton said he wants the teacher's contract to be terminated and others who knew about the lesson to be held accountable.

"I want to know who approved that lesson," he said.

The teacher has worked for SBISD since 2007 and has been at Stratford since 2013, according to the district.

Read the full statement from Spring Branch ISD below:

A Stratford High School teacher has been placed on administrative leave given concerns with the professional judgment in her lesson planning and delivery during a warm-up activity Monday.

Inappropriate and offensive language was used, which the Spring Branch Independent School District does not condone and will not accept.