Which player had the best sneakers of Week 6 in the NBA? 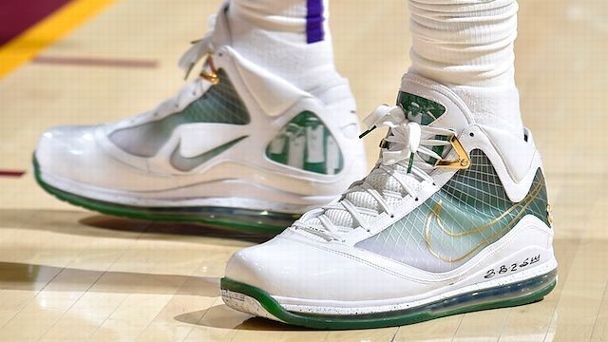 In his return to Cleveland this season, LeBron James didn't just look to honor his home state with the launch of his new "More Than An Athlete" docuseries chronicling his rise from Akron to the heights of the sporting world, he also broke out a pair of the signature shoes worn during the last season of his first Cavs tenure, in his high school colors.

The St. Vincent-St. Mary themed Nike LeBron 7 sneakers featured the Fighting Irish's classic green and gold accents, with portraits of James and his high school teammates from the early 2000s inset along the heel and tongue.

Originally released in 2009 in just 10 cities, the shoes were created in tandem with the world tour premiere for James' first documentary, "More Than A Game." A decade later, he has continued to build on that premise through a variety of platforms and ventures.

"Every year there is a run [promoting prostate health awareness] in Philadelphia during Father's Day called Gary Papa's Run, in which my uncles compete in; 1485 is the number which my Uncle Geoff ran in,"said Galloway, referring to the number that appears on the toe of the right shoe.

In addition to the shout-outs to Geoff and Peter, he also added a nod to "Team Arnold," the band of friends and family members who support Geoff during his races. All year long, Galloway has been working with customizers to celebrate different themes and stories close to home.

"'Get checked' is on the side because this is a serious ailment that a lot of men don't get checked early enough," Galloway said. "Both of my uncles are doing great now and have become great ambassadors for this cancer."

"Often times, we don't give OGs their roses while they can still smell 'em," Dinwiddie wrote on Instagram. "Tribute to a legend that deserves his farewell tour! And the only current player that will be a part of this journey this season."

The sneakers featured Wade's "One Last Dance" mantra for his final season atop the forefoot bands, along with his jersey number, palm trees and a purple and neon-green stingray-splatter graphic that was originally featured on the future Hall Of Famer's first Li-Ning Way Of Wade All-Star Game sneakers.

And then there's PJ Tucker, who has changed his sneakers as many as three times per game, with a rotation of six pairs of coveted kicks in three games this past week. In between donning the much-hyped upcoming Air Fear of God 1, a pair of vintage LeBrons from a decade ago and an original 2009 Kobe IV iD by former NBA glue guy Ronny Turiaf, Tucker once again surprised with a pair of original Kevin Durant sneakers.

The vivid yellow pair of KD3s was originally a "Christmas" theme during Durant's OKC run. Thanks to the lack of color restrictions, Tucker has no problem standing out in the clashing signature kicks of his fellow former Texas Longhorn.