Which player had the best sneakers of Week 5 in the NBA? 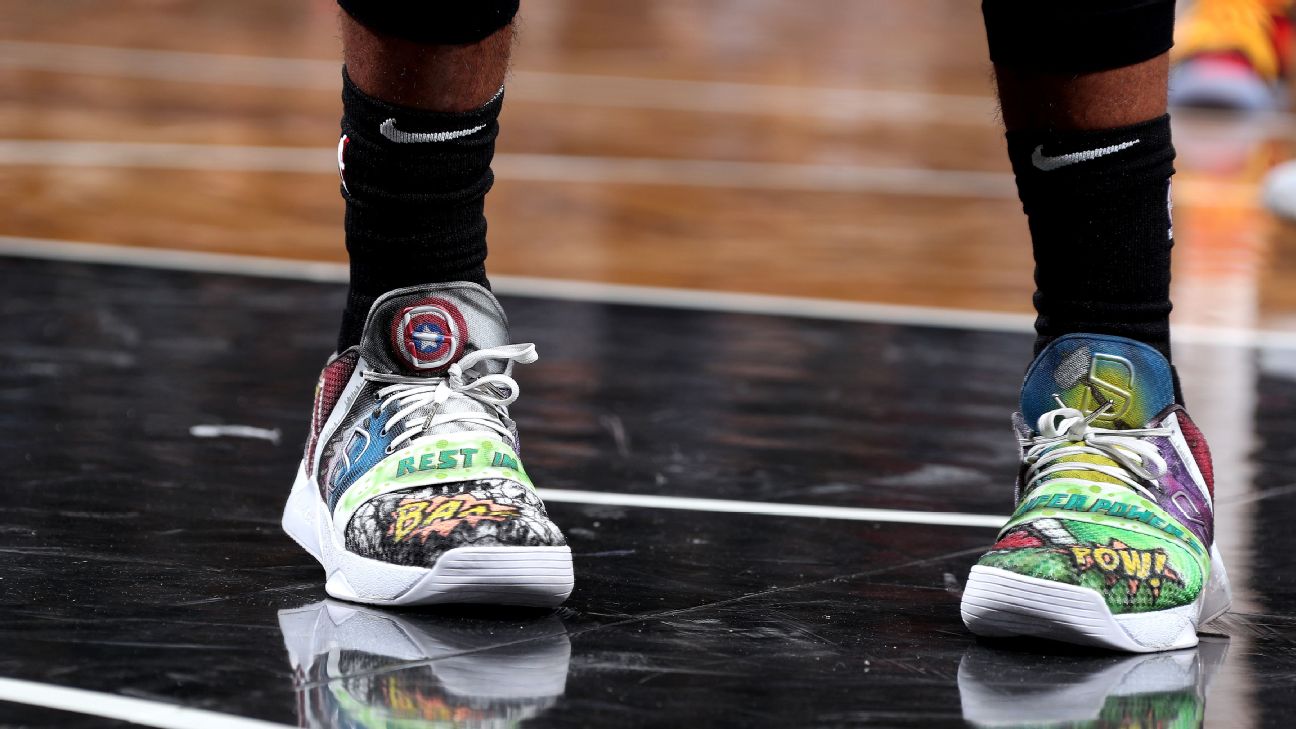 This season, more than ever before, players can make a statement on the court simply through loud, clashing colors at any point of the season. For Trail Blazers All-Star Damian Lillard and Brooklyn Nets guard-on-the-rise Spencer Dinwiddie, they've been telling stories and themes through their footwear, perhaps better than anyone else across the league.

Lillard's latest edition of his fourth Adidas signature shoe sends a message to the naysayers he has faced on the road early in the season. During a late-October matchup against the Orlando Magic, a slow start brought out the wrath of a courtside fan. Now, the aftermath is highlighted on a pair of his sneakers.

"The whole first half, he just wouldn't shut up. I got tired of it," Lillard said after the Oct. 25 game. "I told him at the end of the second quarter, 'We're going to see.' He kept on talking. And we saw."

Lillard erupted for a franchise-record 34 points in the second half, handing the Magic and their loudest fan a home loss, en route to finishing with 41 for the night.

"I addressed it how I should," said Lillard. "I did it on the court."

Earlier this week, Lillard unveiled yet another look of his Dame 4 sneaker, taking direct aim at his hecklers with a clean white, yellow and silver colorway accented by none other than the "zipper mouth" emoji, a nod to the Orlando game.

Along the tongue, the shoe features the phrase "Get Dealt With" -- Lillard's lone caption on Instagram that night after the game and a message to future prospective hecklers throughout the season.

While Lillard is among just a dozen players around the league with their own signature shoe, Dinwiddie took matters into his own hands, sketching up his own signature sneaker concept on the team plane last year and partnering with a factory to see his dream come to life.

The result is his own signature shoe, the Kairos, "signifying the convergence of optimal timing and maximum effort," and featuring his own "SD8" logo along the side. All season long, Dinwiddie has been taking advantage of the shoe's open canvas for storytelling and cycling through a new custom-painted pair for every game, honoring everyonefrom Frederick Douglass to Prince to his on-court idols such asAllen Iverson. His latest pair pays tribute to Marvel comics legend Stan Lee, who passed away late last week at the age of 95. The sneakers include graphics inspired by several of Lee's most known works, along with a portrait of Lee accented by a halo.

"My childhood was basically Iron Man and Vegeta," Dinwiddie captioned on Instagram. "Thank you for all the memories."

After every game, Dinwiddie auctions off his game-worn sneakers for charity in support of youth programs, with the "Rest In SuperPower" pair currently fetching bids over $650.

While themed sneakers might be headlining the current era of footwear, Vince Carter turned back the clock to a time when over-the-top innovation charged the new millennium. Celebrating the sneaker worn during his instant-classic dunk over a 7-footer in the 2000 Olympic Games, Carter plans to wear a retro remake of the Nike Shox BB4 model for the remainder of the season.

"The success of the dunk started the legend of the shoes, but I myself went to another level with them, too," said Carter. "I became a star player in the BB4."

The dunk put the rocket-booster-inspired shoes on the map, with a perfect-storm showcase of the technology that Nike could only dream of. Carter soon received his own signature line the following season, with each model featuring the brand's new Shox cushioning pillars.

"Getting the opportunity to debut a new technology was a no-brainer to me," said Carter. "It made sense with how I played."

Elsewhere in the league, Oklahoma City Thunder wing Paul George synced up his sneakers with the team's new "City Edition" uniforms, splashing his PG2 signature model with a tribal pattern inspired by the region's local Native American culture. Clippers emerging big Montrezl Harrell made use of his sneaker-free-agent status once again, this time donning a retro pair of Shaquille O'Neal's first signature shoe, the Reebok Shaq Attaq, with the logo hangtag still intact.

PJ Tucker took a break from wearing yet another multithousand-dollar exclusive pair, instead honoring the 2009 debut signature model from a fellow University of Texas Longhorn by breaking out a pair of Kevin Durant's oft-forgotten KD1 model.

"My passion for shoes goes way deeper than just the hype," Tucker captioned on Instagram. "I've been doing this all my life. It's not about bragging or boasting ... KD1s was crazy!!"