Which player had the best sneakers of Week 21 in the NBA? 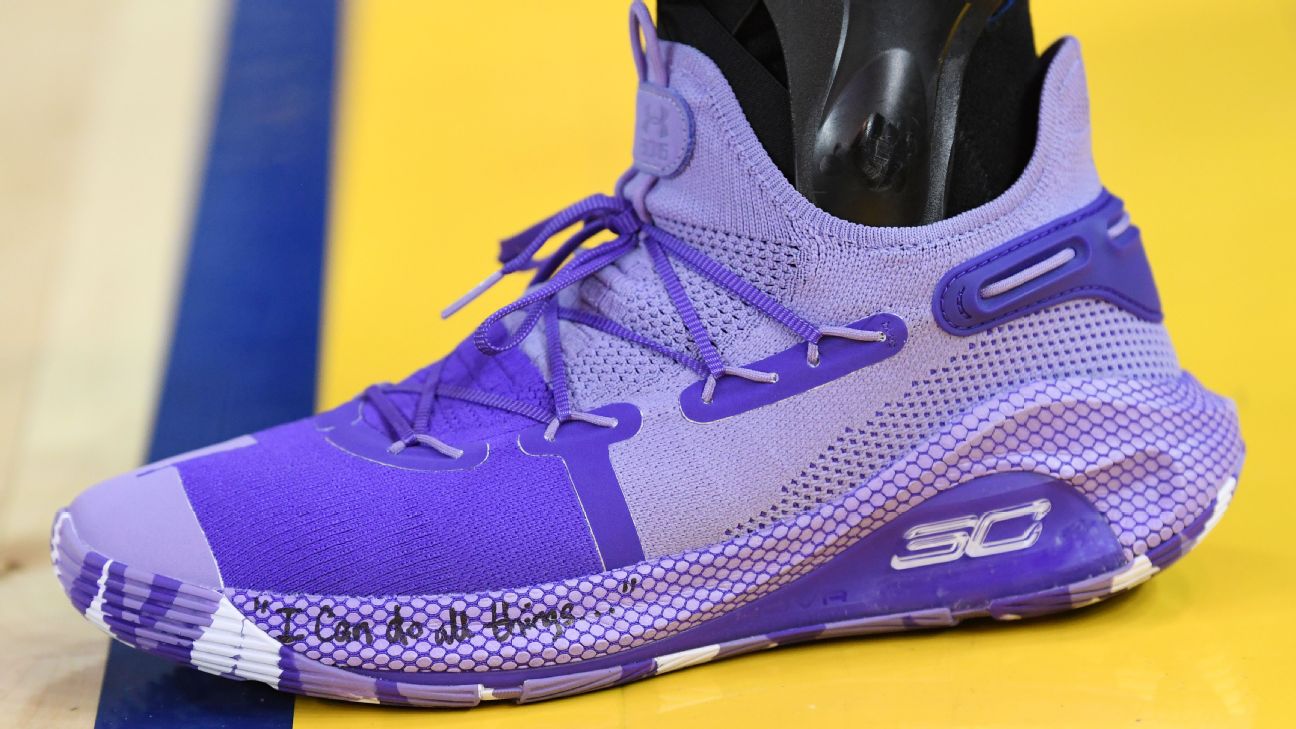 Nine-year-old Riley Morrison's viral handwritten hope for Stephen Curry's basketball sneakers to be merchandised for young girls like her helped to fuel a change beyond her wildest expectations, as the Warriors star incorporated the young aspiring player into the design of his latest Curry 6 colorway, a special edition created for International Women's Day.

"I expected a canned response," her father Chris told ESPN.

The letter from November led to a company-wide change to list sneakers in unisex sizing, with search results on the brand's website now showing all basketball products for men, women, boys and girls.

"I was immediately impressed when I saw Riley's letter; that a 9-year-old girl had the courage to use her voice to call attention to an issue and keep us accountable," Curry said.

Almost instantly, Curry called on his team at Under Armour to not only update the website search system but to also create a path to work with Riley on a colorway of his newest signature shoe. Curry's own handwritten response immediately went viral as well.

With International Women's Day serving as the perfect platform, the purple orchid, grey and white colorway was crafted, and features more handwriting from Morrison, in the form of aspirational phrases and sketches of girls playing basketball along the shoe's sockliner.

"She was focused on the opportunity for all girls, not just herself," Curry added. "She's been an amazing catalyst for change -- not only with my product but also with the entire Under Armour brand. She is inspiring, and wise beyond her years."

To celebrate the launch, Curry invited Riley from her hometown in nearby Napa, California, to the Warriors' home game against the Denver Nuggets. It was there that Curry also announced that all sales from the purple Curry 6 would help to fund a two-year, $30,000 scholarship for an aspiring graduating female high school student from the San Francisco Bay Area. The first recipient of the scholarship, Vivian Wu, was on hand to receive the award from both Curry and Morrison.

"Just a reminder that one small gesture can lead to something truly special," Curry wrote in an Instagram caption after the game.

This past week saw moments and milestones extend far beyond just the game, as LeBron James also celebrated an achievement he couldn't imagine.

As he was expected to pass Michael Jordan on the league's all-time scoring list, James and Nike worked up a detailed and inspired pair of his new LeBron 16 sneakers months ago, just for the occasion.

His latest signature shoe featured updated panels and design elements drafting off of the iconic Air Jordan 3, the shoe James wore as a tribute during one of his first preseason games as a pro in 2003. James wore two pairs during Wednesday's game, one with yellow laces during the first half, another with purple laces for the second half.

At halftime, he added his own handwritten inscription to the left shoe's midsole: "Thank You M.J."

"For a kid from Akron, Ohio, that needed inspiration and needed some type of positive influence, MJ was that guy for me," James said after the game. "I watched him from afar, wanted to be like MJ, wanted to shoot fadeaways like MJ, wanted to stick my tongue out on dunks like MJ, wanted to wear my sneakers like MJ. I wanted kids to look up to me at some point like MJ and it's just crazy, to be honest. It's beyond crazy."

Rockets wing PJ Tucker continued his impossible-to-top run of rare and exclusive sneakers, breaking out a pair of the Nike KD 3 originally thought to be made for only Kevin Durant.

"I've known KD for so long," said Tucker, who hosted Durant on his recruiting tour at Texas. "We've been friends for years and I've always loved his sneakers."

Featuring upgraded leather and faux horsehair along the collar, the pair was made for KD's reign over the league's short-lived H-O-R-S-E contest during the 2011 All-Star Weekend. The heel features a hilarious caricature of a horse shooting a jumper.

"This pair took me a time to get," Tucker said. "I sent him a picture, and his response was classic. We always talk and I always send him pictures when I get his old stuff. He literally said, 'PJ, I really don't think I even have a pair.'"

Durant typically wears a size 17 or 18. The fact Tucker tracked down his size 14 baffled even some of the Nike Basketball folks who worked on the shoe.

"I don't know many other people with this pair right here," he added. "This pair is special for me."

While he hasn't yet decided if he'll be retiring this spring or not, Vince Carter has been turning back the clock all season long in the Nike Shox BB4, the sneaker he headlined nearly two decades ago when he first signed with Nike, as he leapfrogged a human during the 2000 Olympics.

"The BB4 is where it started. It changed the game as far as the look," Carter recently told Nice Kicks. "You didn't see a shoe that looked like that or was built that way."

Nike has made him a handful of exclusive colorways to wear all season, and plans to re-release the shoe this year. The latest pair he debuted honored his team at the time of the original launch, the Toronto Raptors, with textures and graphics inspired by the team's mascot.

"It's something that I had been wanting to do. People had been asking me [about the shoe] for a long time," he added. "I had asked [Nike] to bring them back a couple of years ago and I guess they just weren't ready to for whatever reason. I'm just glad it's back now. It's been a hit."

Elsewhere in the league, DeMar DeRozan and Trae Young both debuted detailed editions of their latest sneakers, both of which were actually originally made in case they were named to the recent NBA All-Star Game in Charlotte, North Carolina. Young's laceless pair of the Adidas N3XT L3V3L feature a NASCAR-inspired series of touches honoring the host city, from a checkered flag graphic upper to gradient fading colors inspired by the veering race cars. DeRozan's latest Kobe 4 Protro colorway is accented by a gleaming chrome heel counter and grid map detailing along the toe.

Check out all of the best sneakers from around the NBA this week and vote for your favorite pair in our latest poll at the bottom. For real-time updates on the feet of the game's biggest stars, be sure to join our ESPN SneakerCenter Facebook Group.
Report a correction or typo
Related topics:
sportsespncollin sextoncleveland cavaliershouston rocketsdenver nuggetsisaiah thomaskyrie irvingboston celticsnbapj tucker
Copyright © 2021 ESPN Internet Ventures. All rights reserved.
More Videos
From CNN Newsource affiliates
TOP STORIES