Which player had the best sneakers of Week 15 in the NBA? 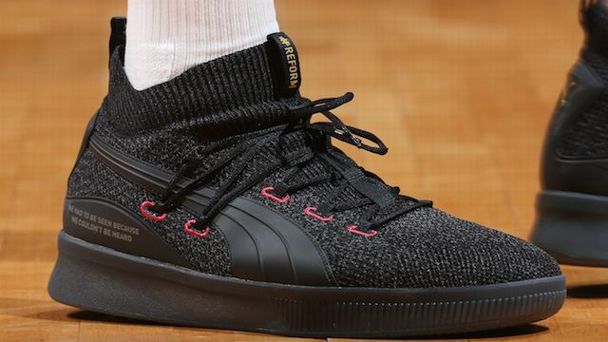 As Martin Luther King Jr. Day served as an annual platform for messages of inclusion and equality earlier this week, players around the league took to their sneakers to highlight causes, quotes and themes that have taken on extra meaning in their lives.

In the latest chapter of Puma's relaunch in the basketball space, the brand's newest Clyde Court colorway aims to tackle an ambitious cause, celebrating the launch of the REFORM Alliance. The new organization will focus on efforts to reform the criminal justice system and is chaired by rapper Meek Mill, Philadelphia 76ers co-owner Michael Rubin, Puma Basketball creative director and longtime entertainment icon Jay-Z, New England Patriots owner Robert Kraft and a series of additional business executives.

Styled in a black upper with red and gold accents throughout, the shoe also features longtime Puma ambassador and Olympian Tommie Smith's quote "We had to be seen because we could not be heard," describing his iconic protest for equality on the medal stand during the 1968 Olympic Games.

"[The shoe] not only takes inspiration from the past, but hopefully encourages a new generation of individuals to fight for universal equality," said Adam Petrick, PUMA chief marketing officer.

As the exclusive brand partner of the REFORM Alliance, Puma will be donating 100 percent of net proceeds from sales of the #REFORM Clyde Court to the new organization. In addition to the shoe's proceeds benefiting the Alliance, the brand is also donating $5,000 on behalf and in the name of each player that wears them in a game. Golden State Warriors center DeMarcus Cousins debuted the #REFORM themed sneakers on court, with additional players expected to wear them throughout February.

Since 2011, Nike has been leading the way in launching an annual Black History Month collection of sneakers, often debuted on MLK Day by some of the league's biggest stars, with proceeds benefiting a variety of community organizations. The brand's senior creative director, Jonathan Johnsongriffin, has been overseeing the collection each year since the start of the decade, and the labor of love came to life in the company's first joint release between its Nike, Jordan and Converse brands.

"In sport, there's a movement happening where athletes are inviting others to discover the full side of who they are, through finding their voices and improving their communities. We wanted that movement to inspire this year's design," said Johnsongriffin.

Still sidelined by his Christmas Day groin injury, LeBron James sat along the Los Angeles Lakers bench in his latest Black History Month sneaker, a purposefully mismatched black and white pair of the Nike LeBron 16 featuring the brand's "EQUALITY" phrasing along the heel and outsole. The lettering is made up of a series of languages and gender icons.

Last season, James caused a stir debuting the first mismatched "EQUALITY" LeBron 15 while visiting Washington, D.C. -- the sneakers eventually landed in the Smithsonian National Museum of African American History and Culture. Nike raffled off only 200 pairs of last year's edition, earning $457,780 in donations to the museum through more than 60,000 entries. This year's edition launched nationwide on MLK Day.

"Equality is all about understanding our rights, understanding what we stand for and how powerful we are as men and women, black or white or Hispanic," James told ESPN's Dave McMenamin at the time.

With his own signature sneaker through upstart brand Q4 Sports, Detroit Pistons shooting guard Langston Galloway has been rocking custom, hand-painted themes atop his LG9 II model all season long. For MLK Day, Galloway wanted to incorporate a portrait of Dr. King on the side of the shoe, along with one of his favorite quotes, in which King implored a group of college students in 1967 to find any way they could to contribute to the civil rights movement.

"If you can't fly, then run

If you can't run, then walk


If you can't walk, then crawl

But by all means, keep moving."

"I'm a proud African-American and want to do right by the ones who came before me with respect," said Galloway. "I can't thank my guy Andrew Lewis Customs enough for bringing my thoughts to reality."

LA Clippers breakout center Montrezl Harrell had his own tribute to the civil rights era in store, as the sneaker free agent's pair of the classic AND1 Tai Chi featured a graphic illustration print of the 1963 March on Washington for Jobs and Freedom. Nearly 250,000 marched through the nation's capital carrying a series of "We Demand" signs highlighting a push for freedom, integrated schools and the right to vote. Signs urging for "An end to bias now! Equal rights now! Decent housing now!" can all be seen along the open canvas panel of Harrell's Tai Chis.

The monumental late-summer march is also when Dr. King delivered his "I Have A Dream" speech.

Check out all of the best sneakers from around the NBA this week and vote for your favorite pair in our latest poll at the bottom. For real-time updates on the feet of the game's biggest stars, be sure to join our ESPN SneakerCenter Facebook Group.
Report a correction or typo
Related topics:
sportsespnoklahoma city thundergolden state warriorssneakershouston rocketsla clippersrussell westbrookdetroit pistonsnbapumalangston gallowaylos angeles lakersmontrezl harrelldemarcus cousinspj tuckerlebron james
Copyright © 2021 ESPN Internet Ventures. All rights reserved.
More Videos
From CNN Newsource affiliates
TOP STORIES