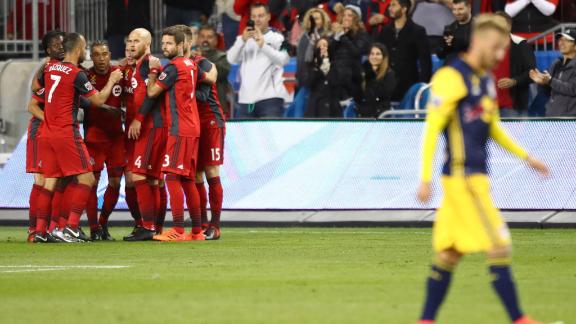 Toronto FC secured the first MLS Supporters' Shield in club history with a 4-2 victory over the New York Red Bulls on Saturday night.

Victor Vazquez's 80th-minute penalty put Toronto ahead for good before Justin Morrow completed his hat trick as the Reds became the first Canadian team to ever clinch the league's best regular-season record.

Morrow was on hand to score the opener in the 32nd minute afterLuis Robles blockedTosaint Ricketts' initial effort, then added his second goal five minutes later by tapping home after Michael Bradley's shot deflected through the Red Bulls' defense and into his path.

New York, clinging to the last playoff spot in the Eastern Conference, hit back almost immediately asGonzalo Veron was played in by Tyler Adams. Adams set up Veron again in the second half, but the Argentine was fouled by Drew Moor andDaniel Royer converted the resulting penalty to equalize.

But Toronto quickly earned a penalty of its own as New York defenderAaron Long hauled down Jozy Altidore, andVazquez made no mistake from the spot.

And in stoppage time, Altidore played a ball across the box for Morrow to complete his hat trick -- the first ever by a Toronto player not named Sebastian Giovinco -- as the Reds won their first MLS trophy in their 11th season.

With two games remaining, Toronto also took its point total to 65 points, three behind the league record of 68 set by the LA Galaxy in 1998.

The Vancouver Whitecaps took a big step toward earning the top seed in the West and secured a playoff spot by winning 1-0 at Sporting Kansas City, which saw its 24-match home unbeaten streak snapped.

Erik Hurtado volleyed in a long Jordan Harvey cross into the box with an audacious flick to score the only goal in the 53rd minute.

Sporting KC's Graham Zusi was sent off in stoppage time after making contact with Vancouver's Yordy Reyna, before an even later red card to Christian Bolanos ensured the game finished 10 against 10.

The Whitecaps, the first club to book their place in the West, hold a four-point lead over Portland, Kansas City and Seattle in the tightly packed conference race.

The San Jose Earthquakes earned a critical three points with a 2-1 win over the Portland Timbers.

Valeri Qazaishvili and Danny Hoesen scored as the Earthquakes stayed in contention for the final playoff spot in the West. They are in seventh place, but only outside the playoff places on goal difference with two games remaining.

Qazaishvili curled in a shot after a good run from Jahmir Hyka to put San Jose ahead in the 16th minute, and Hoesen doubled the lead four minutes after the break.

Sebastian Blanco made it interesting at the end by getting a goal back in the 87th minute, but Portland could not find an equalizer as Diego Valeri saw his MLS-record nine-game scoring streak come to an end.

Kyle Beckerman scored deep into stoppage time to give 10-manReal Salt Lake an important 1-1 draw with the LA Galaxy.

RSL's Marcelo Silva was sent off in the 14th minute for a tackle on Giovani dos Santos, and Bradford Jamieson put LA ahead before halftime by turning in a shot after running onto Jermaine Jones' through ball into the box.

But in the final seconds of the game, RSL won a free kick outside the box. Galaxy keeper Clement Diop made a diving save to deny Joao Plata, but David Horst picked up the loose ball and passed it back for Beckerman to score.

The point put RSL in position for the the final playoff spot in the West, on goal difference above San Jose and also level on points with eighth-placed FC Dallas, which holds a game in hand.

Columbus Crew SCbecame the fifth team in the East to secure its spot in the MLS playoffs by beating D.C. United 2-0.

Josh Williams headed the ball down and into the net following a corner kick to put Columbus ahead in the 14th minute.

Justin Meram then stepped up to curl the ball home in the 56th minute to supply a comfortable lead, and the hosts saw out the victory.

Crew SC returns to the playoffs after missing out last season and following its MLS Cup final defeat to Portland in 2015.

Nikolic scored his MLS-best 21st of the year to put the Fire ahead in the 20th minute. Chicago's Matt Polster put Maxi Moralez under pressure in his own box, and the Hungary international pounced on the loose ball to score.

But Villa, who had led the Boot race for most of the season, kept pace with his 20th of the year with an equalizer before half-time. Moralez made amends by chipping the ball over the Fire back line for Villa to score.

The Fire stayed four points back of NYCFC, putting a major dent in their hopes of catching their opponents for a first-round playoff bye.

The Houston Dynamo stayed in good contention for a playoff spot in the West by beat Minnesota United 2-1.

Alberth Elis headed home the opening goal for Houston in the 69th minute and celebrated by donning a Black Panther mask from the Marvel movies.

Romell Quioto doubled the lead for Houston in the 85th minute, and the goal turned out be crucial as Sam Nicholson found a consolation for Minnesota in stoppage time.

The Dynamo moved up to fifth place in the West, one above Real Salt Lake, San Jose and FC Dallas.

The Montreal Impact missed a chance to gain ground on the Red Bulls for the last spot in the East after losing 2-1 to the Colorado Rapids.

Colorado's Jared Watts and Montreal's Daniel Lovitz had already both been sent off in separate incidents when the Rapids' Stefan Aigner headed in his first MLS goal just before halftime.

Matteo Moncosu equalized for Montreal with a stupendous shot from distance, only for Alan Gordon to come off the bench to net an 81st-minute winner for Colorado.

The Impact are four points back of New York, but only have two games remaining to the Red Bulls' three.

Gonzalez took a deflected shot off his face in the 96th minute to prevent the Lions from sealing the win they needed to stay in the playoff race.

Orlando can be officially eliminated from contention if the Red Bulls beat Toronto FC later in the day.

Atlanta United, on the road for the first time since August, was held to a goalless draw by the New England Revolution.

Atlanta, which had played six straight games at home while opening the new Mercedes-Benz Stadium, already clinched a playoff spot in its inaugural season on Wednesday, while the Revs' already-slim playoff hopes took a further hit.

Atlanta's Brad Guzan made five saves and barely deflected Lee Nguyen's free kick in the 87th minute onto the crossbar to preserve the draw. 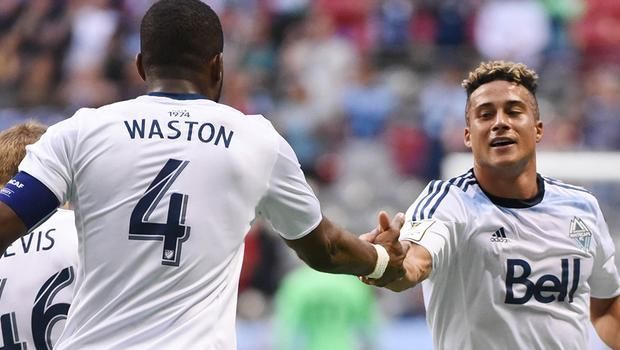 Sporting KC 0-1 Vancouver: Whitecaps are in - Via MLS
Vancouver Whitecaps booked a spot in the MLS Cup Playoffs by ending Sporting KC's 24-match unbeaten run at home in MLS. 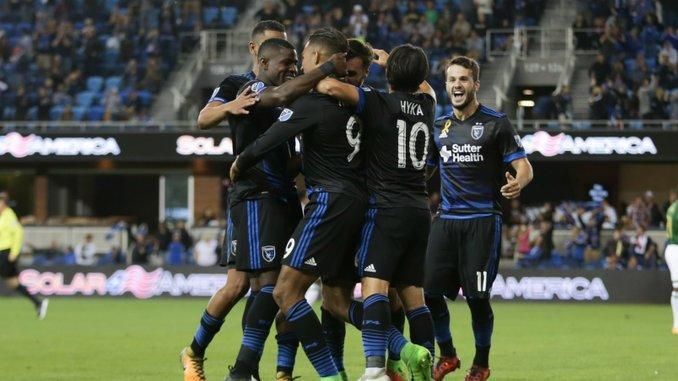 San Jose 2-1 Portland: Quakes get big win - Via MLS
San Jose bested second-place Portland to stay in the mix for the final playoff spot in the Western Conference. 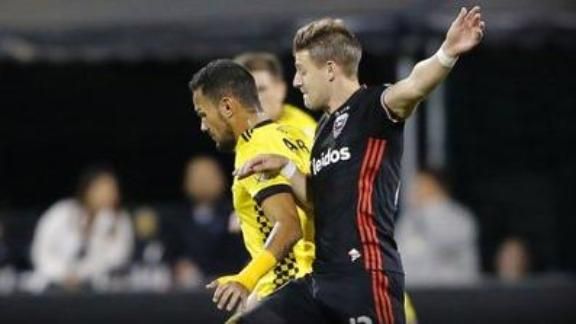 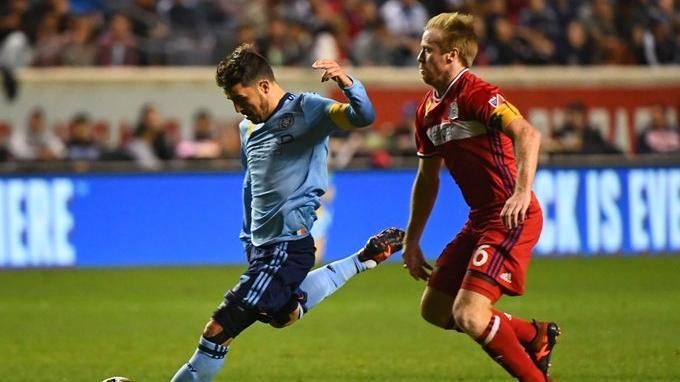 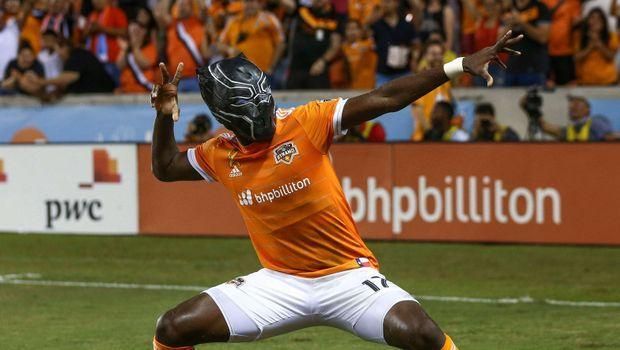 Houston 2-1 Minnesota: Dynamo climb the table - Via MLS
Houston took a big step in their push for a playoff spot in the Western Conference by holding off Minnesota United at home. 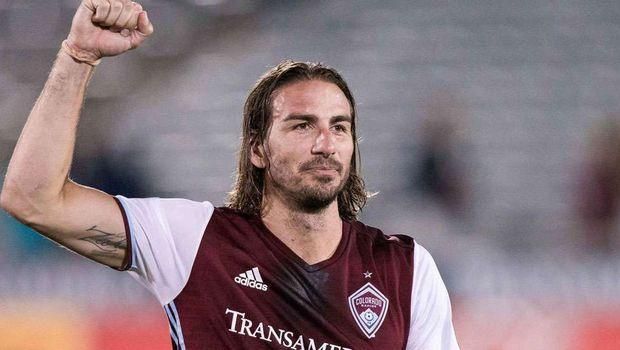 Orlando City 0-0 FC Dallas: Goalkeepers heroic
Orlando City and FC Dallas both had an abundance of scoring chances, but their respective goalkeepers denied them all. 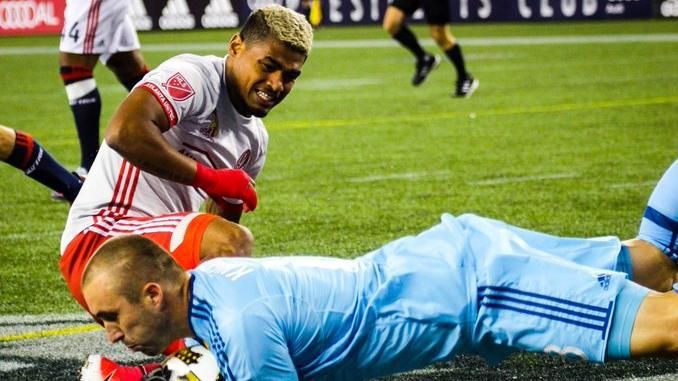