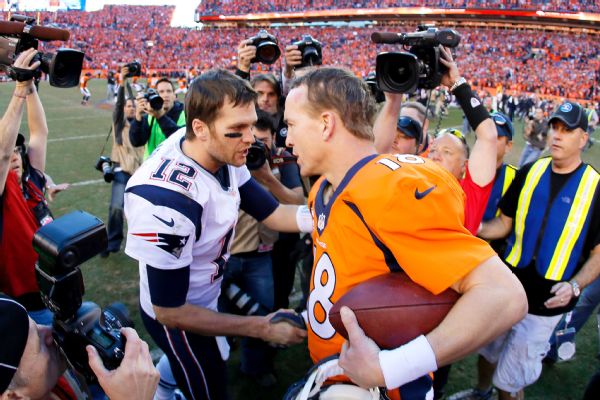 FOXBOROUGH, Mass. -- New England Patriots quarterback Tom Brady had some memorable battles against Peyton Manning over his football career, and they met up again on Sunday at Sports Authority Field at Mile High in Denver. Only this time, the meeting was before and after the game, not during it.

Manning's longtime teammate Brandon Stokley tweeted a picture of the two quarterbacks meeting behind the scenes of the Patriots-Broncostilt, which New England won, 16-3.

"It was nice to see him. It was a nice surprise. I didn't realize he'd be at the game," Brady said Monday night during his weekly interview with Westwood One Radio. "I saw him briefly before the game, and then I saw him after the game with his kids. So it was nice to see his kids are growing up fast, just like mine are.

"He and I have a lot in common over the years. I thought he was just one of the very best to play the position. I always looked up to him and admired him for everything that he accomplished in the league as a great leader for his team. He was just a spectacular player. So I've always enjoyed being around him and certainly always talking a lot of football."

Asked what they talked about on Sunday, Brady said, "For the most part, we haven't seen each other in a long time, so it was just catching up, talking about our families, some holiday plans, just a lot of very cordial conversation. I really like Peyton. I've had a great friendship over the years, and hopefully, it will stay that way for many years to come."

Brady had an 11-6 record against Manning in their head-to-head matchups. Manning secured the most recent victory, in last season's AFC Championship Game, en route to the Broncos' Super Bowl championship.