Texans win in a bizarre matchup after benching Osweiler 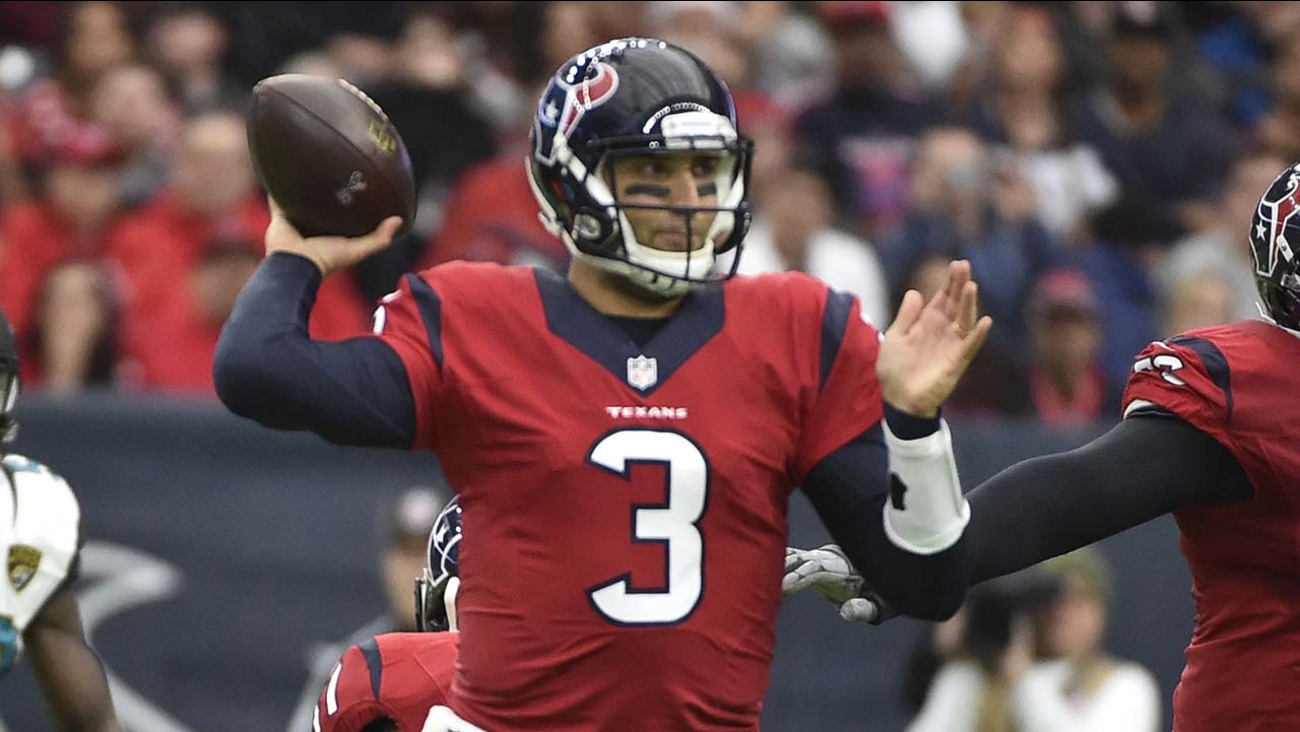 HOUSTON -- Tom Savage threw for 260 yards after Brock Osweiler was benched in the second quarter, and Lamar Miller scored Houston's only with less than three minutes remaining as the Texans rallied for a 21-20 win over the Jacksonville Jaguars on Sunday.

The win was Houston's 10th straight in the division and left the Texans (8-6) tied with Tennessee for the AFC South lead. But Houston controls its playoff future with a 5-0 mark in the division.

Osweiler threw interceptions on consecutive drives in the second quarter to help Jacksonville build a 13-0 lead. Coach Bill O'Brien had insisted all season he hadn't thought about benching Osweiler, but he'd seen enough after that and brought in Savage. The move was met with a huge ovation from the home crowd that had been booing Osweiler for most of the day.

Houston trailed by nine entering the fourth quarter and Nick Novak made his fourth field goal before Miller bulled in for the go-ahead touchdown. The Jaguars were flagged for pass interference twice on that drive to set up the score.

The Jaguars got the ball back twice, but they failed on a fourth-down conversion the first time and Blake Bortles was intercepted the second time.

Bortles threw for 92 yards and ran for a touchdown for the Jaguars (2-12), who dropped their ninth straight.

Osweiler has struggled in his first season in Houston after signing a $72 million contract to join the Texans from Denver. He has 16 interceptions and 14 touchdown passes. Osweiler was 6 for 11 for 48 yards before he was pulled.

It was the first regular-season appearance since Dec. 14, 2014 for Savage, who missed all of last season with a shoulder injury.

Houston's defense was led by Jadeveon Clowney, who had a sack and three tackles for losses.

The Texans cut the lead to five with a field goal in the third quarter. The Jaguars quickly padded it when Marqise Lee returned the ensuing kickoff 100 yards for a touchdown to make it 20-8. It was their first kick return touchdown since 2007. Lee dodged a couple of defenders before simply outrunning the rest of the Texans.

Another field goal for Houston cut the lead to 20-11 late in the third quarter.

Earlier, a high pass by Osweiler was deflected by Will Fuller, intercepted by Jalen Ramsey and returned 35 yards. Jacksonville's offense couldn't move Jason Myers made a 50-yard field goal for a 6-0 lead in the second quarter.

Osweiler was picked off again on the next drive and Jacksonville cashed in when Bortles ran for a 1-yard touchdown to push the lead to 13-0.

The Texans looked to have scored on Savage's first drive, but Akeem Hunt fumbled and the ball was placed at the half-yard line. Miller was stopped for no gain on the next play before Savage threw an incomplete pass on fourth down.

Jacksonville couldn't move and was called for holding in the end zone on a punt, giving Houston a safety to make it 13-2.

Houston star defensive end J.J. Watt was on the sideline Sunday for the first time since having season-ending back surgery in September. Last year's NFL Defensive Player of the Year cheered and clapped throughout the game after getting a round of applause when he was shown on the Jumbotron just before it started.