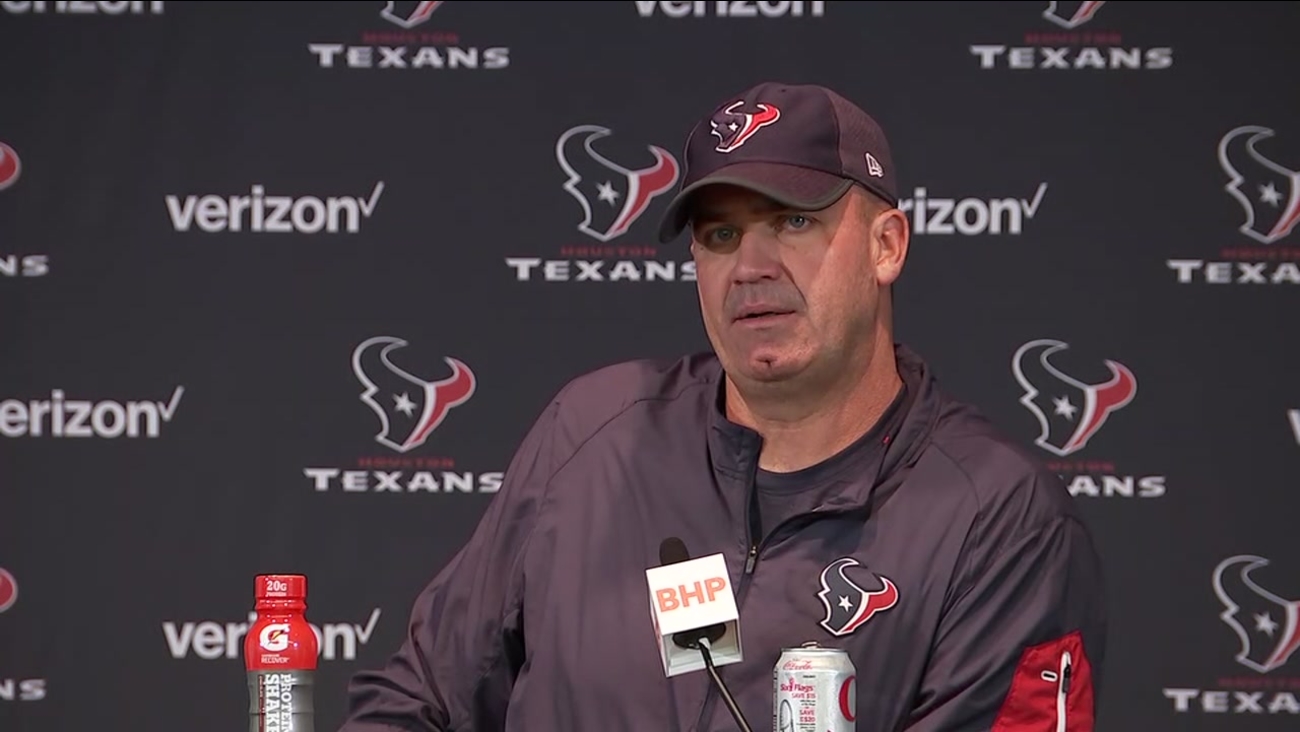 Bill O'Brien speaks after Texans victory over the Patriots (KTRK)

HOUSTON, Texas -- Tom Brady threw a touchdown pass in his first game since winning the Super Bowl on the same field and the New England Patriots fell to the Houston Texans 27-23 in a preseason game on Saturday night.

Brady, who sat out last week, was 6 of 9 for 67 yards while directing the offense for two possessions.

The Patriots punted on their first drive before Brady connected with Rex Burkhead on a 22-yard touchdown throw that tied it at 7-7 early in the second quarter. His performance came in his return to Houston after leading the Patriots back from a 25-point third-quarter deficit to a 34-28 overtime win against the Atlanta Falcons to earn his fourth Super Bowl MVP trophy here in February.

It was a far different environment than the previous time the Patriots were at NRG Stadium, but there was a reminder of their big win as remnants of red and blue confetti from the Super Bowl postgame celebration remained in the phone banks near their bench.

Rob Gronkowski also made his season debut for the Patriots, playing about 15 snaps, but not catching a pass, in his first preseason appearance since 2012. Julian Edelman and Brandin Cooks also played after sitting out last week and Cooks had a 7-yard reception.

Houston quarterback Tom Savage was effective in two drives, going 8 for 9 for 98 yards with a 2-yard touchdown pass to Jaelen Strong that put the Texans up 7-0 in the first quarter.

"I'm really, really comfortable with this offense," Savage said. "We have a lot of talent out there and a lot of the guys are making some big plays for me and it's been awesome."

Texans rookie first-round pick Deshaun Watson, who had 179 yards passing last week, threw for 102 yards and ran for a 2-yard touchdown in about two quarters of work.

Jimmy Garoppolo was 15 of 23 for 145 yards with a touchdown and an interception after taking over for Brady.

Houston third-round pick D'Onta Foreman, who won the Doak Walker Award as the nation's best college running back last season, had another solid game, after rushing for 76 yards last week. He had two receptions for 66 yards and ran for 10 yards and a 4-yard touchdown in the fourth quarter. His best moment came when he grabbed a short pass from Watson and broke several tackles en route to a 63-yard gain that set up Watson's touchdown in the third quarter.

Houston defensive end J.J. Watt played just one series, but it was long enough to provide one of the highlights of the night. Watt, who is returning from back surgery which cost him 13 games last season, leveled Burkhead for a 2-yard loss on New England's opening possession for his first tackle of the season.

Houston outside linebacker Jadeveon Clowney and receiver DeAndre Hopkins did not play after both players appeared in the first preseason game. It appears to be a precautionary move since the team hasn't acknowledged injuries to either player. Patriots running back Mike Gillislee sat out for the second straight week with a hamstring injury. New England linebacker Elandon Roberts injured his ribs in the second half and didn't return.