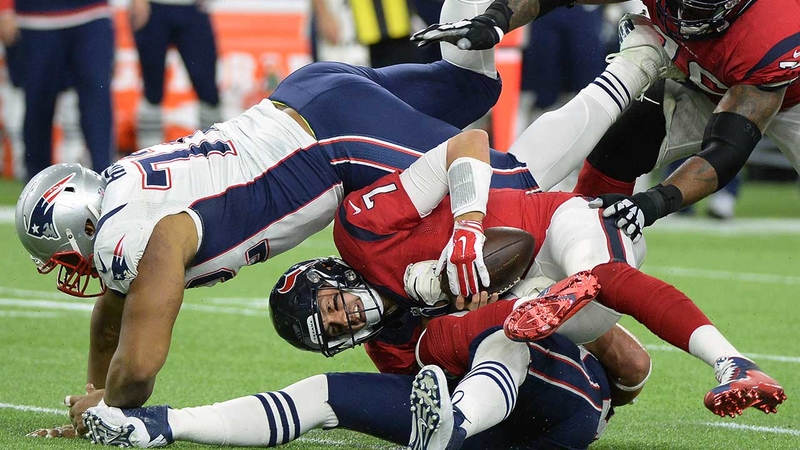 HOUSTON (KTRK) -- Houston quarterback Brian Hoyer is doubtful for Sunday's AFC South showdown against Indianapolis after suffering his second concussion in less than a month.

Coach Bill O'Brien said Monday that Hoyer is following the league's concussion protocol, and he is also dealing with a strained neck and a wrist problem after being sacked five times in a 27-6 loss to New England.

Hoyer missed a game earlier this season after getting a concussion on Nov. 16 against the Bengals. O'Brien was asked if he's more worried about Hoyer's health considering this is his second concussion in less than a month.

"There's nothing more important than the health and safety of every player in that locker room," O'Brien said. "I think that's paramount, that's No. 1. As far as those things go I think obviously it's too early to tell ... whenever you suffer a concussion like that, multiple concussions within a five- or six-week span, obviously the player himself is concerned about that, and nobody's more concerned than I am because of my relationship with Brian and his family."

The upcoming game is an important one for the Texans, who are tied with the Colts for first place in the division.

If he can't go against Indianapolis, the Texans will look to T.J. Yates, who started the last time Hoyer was out and led them to a win. Yates was signed on Oct. 28 following the release of Ryan Mallett, who was let go after missing the team charter to Miami.

Yates said he will be ready to play on Sunday if he's needed and thinks the work he has put in the last few weeks will help him if he has to start.

O'Brien said he spoke to the team on Monday about Yates and the confidence he has in him if they need him on Sunday.

"He's a smart guy," O'Brien said. "He works every hard at it. He prepares like he is the starter. In a situation like this ... I think we have a good guy there to step in because he's a pro and he's got really good poise."

Though the brunt of the criticism for the hits Hoyer took on Sunday night fell on the shoulders of the offensive line, O'Brien made sure to note that those players aren't the only ones who need to improve in order to better protect the quarterback.

"I think everybody's involved in that," O'Brien said. "I think we all have to do better. I think I have to do a better job of helping those guys out with better schemes. They have to play better, they know that. The backs and the tight ends are involved in protecting the quarterback, too. The receivers are involved in getting open better ... we all have to do a better job this week.
Related topics:
sportshoustonhouston texans
Copyright © 2021 KTRK-TV. All Rights Reserved.
More Videos
From CNN Newsource affiliates
TOP STORIES