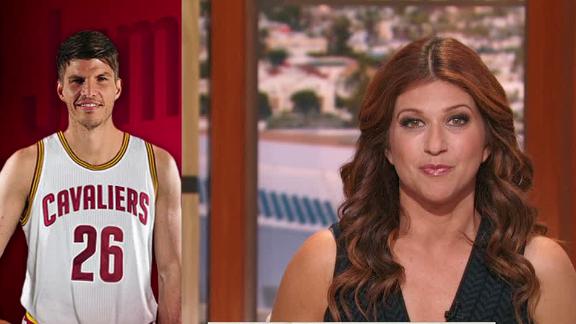 The Cleveland Cavaliers hope to have their acquisition of Atlanta Hawks sharpshooter Kyle Korver completed by Saturday at the latest, according to league sources.

Sources told ESPN that Korver, in anticipation of officially joining the Cavaliers, did not accompany the Hawks to Dallas in advance of Atlanta's road game Saturday against the Mavericks.

The Portland Trail Blazers and Cavaliers announced on Friday a swap of first-round draft picks that sets the stage for Cleveland's trade for Korver. Friday's trade calls for the Cavs to send their first-round pick in June's draft to the Blazers for a 2018 first-round pick, which Cleveland originally sent to Portland along with Anderson Varejao in exchange for a future second-round pick at the February trade deadline last year.

Under the current framework of the Korver trade, sources told ESPN's Brian Windhorst that Cleveland is poised to send veterans Mo Williams and Mike Dunleavy along with a protected 2019 first-round pick to the Hawks.

The Cavaliers would not be permitted to trade their 2019 first-rounder to Atlanta if they had not reacquired their 2018 first-rounder from the Blazers, because league rules preclude teams from trading away first-round picks in consecutive seasons.

The primary factor delaying completion of the Korver trade, sources said, is Atlanta's ongoing effort to find a third team willing to take on Dunleavy. But the Hawks, sources said, waived Ryan Kelly on Friday to open up a roster spot in the event they need to make room for both Williams and Dunleavy on their roster.

Korver addressed the potential deal following Atlanta's win Thursday night in New Orleans and acknowledged that he is Cleveland-bound.

"There's definitely mixed emotions," Korver said. "There's a lot of hard ties to Atlanta, for a lot of reasons. A lot of friendships, relationships. It's where I had my best basketball years, honestly. It's where I had all my kids. It's hard to leave that behind.

"Obviously it's a great opportunity for me to go to Cleveland. So I'm very excited about that part of it. But there's a lot of relationships that I care about here that I'm going to miss.

"From a basketball perspective, [Cleveland is] a great, great fit for me. And I know that."

Korver, who is earning $5.2 million this season in the final year of his current contract, is averaging 9.5 points per game and shooting 40.9 percent on 3-pointers. He was an All-Star in 2015.

Brooklyn Nets coach Kenny Atkinson, who was formerly an assistant in Atlanta, stressed that Korver isn't merely a 3-point specialist and that the Cavs would be getting a great player.

The Cavs have been looking for depth on the perimeter following the loss of J.R. Smithin December for three months to a broken thumb. They also lost Chris Andersen for the remainder of the season to a torn ACL.

"It's slowing up our process because of what we're trying to build," said LeBron James, who also called Friday for the Cavs to acquire a proven backup point guard for Kyrie Irving even with Korver en route.

ESPN first reported Sunday that the Hawks had made the decision to field trade calls from interested teams on Korver as well as All-Star forward Paul Millsap and veteran swingman Thabo Sefolosha. All three players can become free agents this summer.

Millsap said after Thursday night's game that it's "not my place" to comment on the organization's direction.

Dwight Howard, who signed a three-year, $70.5 million deal with Atlanta over the summer, was asked whether he thinks the Hawks are going in a different direction than what he signed on for.

"That's a tricky question to answer," he said. "It's basketball. It's a serious business. You never know what can happen, with any team. You never know. I mean, I didn't expect this to happen, but like I said, you never know.

"I'm keeping my mouth shut, my head down and play basketball. I'm not getting involved in none of that stuff."

Will Cavs' Korver acquisition close gap with Warriors?
Amin Elhassan thinks the Cavaliers' acquisition of Kyle Korver would "close the gap considerably" between the Cavaliers and the Warriors.