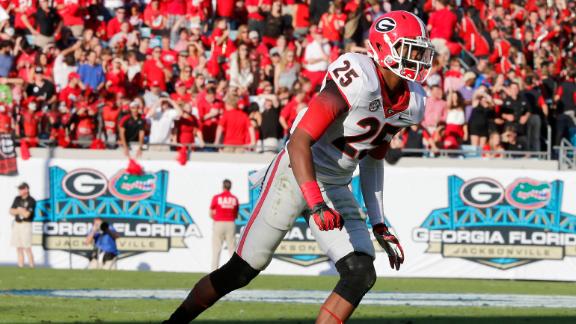 A source at Louisville confirmed Harvey-Clemons' transfer plans to ESPN.com. His grandfather, Woodrow Clemons, told InsideTheVille.com that Harvey-Clemons "wants to stick with Coach Grantham and his defensive system."

Harvey-Clemons was dismissed from Georgia by coach Mark Richt in February following multiple violations of team rules -- issues that previously resulted in his serving suspensions for the 2013 opener against Clemson and the Gator Bowl loss to Nebraska.

Despite missing those two games, Harvey-Clemons ranked third on the team with 66 tackles. He also had 5.5 tackles for a loss, one interception and an SEC-high three fumble recoveries.

Grantham used the 6-foot-5 Harvey-Clemons as a traditional safety in his base 3-4 defensive scheme and in a hybrid linebacker-defensive back role called the "star" position when the Bulldogs moved to a nickel defensive.

"That star position that he's able to play safety and outside linebacker and cover the back coming out or able to rush the quarterback ... we kind of like that," Woodrow Clemons told InsideTheVille.com.

Grantham had coached at Georgia for four seasons before accepting a five-year deal in January to become defensive coordinator at Louisville under coach Bobby Petrino.

Harvey-Clemons, who was ranked by ESPN.com as the nation's No. 1 outside linebacker prospect and No. 17 overall recruit, picked Georgia in 2012. He told reporters late last fall that Louisville was actually his second choice behind Georgia at the time.