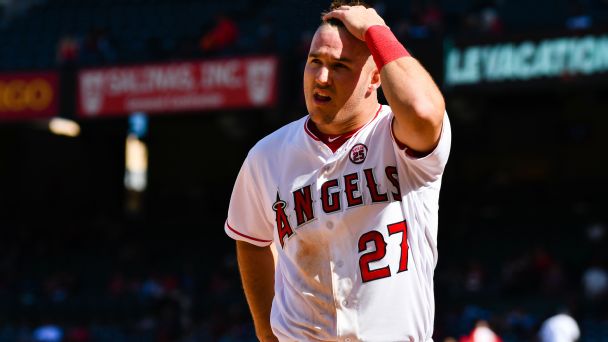 Earlier this week, David Schoenfield considered 10 possible explanations for baseball's extremely slow offseason. Tucked into one of the 10 was a reminder thatMike Trout would have been a free agent this winter, except he signed a six-year, $144.5 million extension back in March 2014.

Which got me wondering: Is it possible that this entire winter -- and the 10 possible explanations for its dawdling -- would have turned out completely differently but for one decision one player made three-and-a-half years ago?

1. The Angels, five games and six teams back of the second wild-card spot, make Trout available at the 2017 trade deadline. The offers are bonkers, with franchise-altering packages. Rather than risk losing Trout for a single sad draft pick in the offseason, the Angels concede the season, trade Trout, immediately nourish their barren farm system and begin looking past 2018 to 2019.

2. The Dodgers get Trout for the 2017 stretch run. Consequently, the Astros get Yu Darvish. Darvish pitches perfectly well in the postseason because he doesn't have to face the Astros and thus nobody picks up that he is tipping his pitches.

3. Consequently, the Astros don't trade for Justin Verlanderseconds before the Aug. 31 trade deadline, and nor do any other teams. Verlander stays a Tiger.

4. As does Justin Upton, no longer desired by the white-flag-waving Angels. Upton opts out of his contract at the end of the season to become a free agent.

6. Instead of a free-agent class "overpopulated with the first-base/DH/oh-God-I-hope-we-don't-have-to-play-him-in-left-field types," as Keith Law put it, the top of the free-agent class is pretty exciting:


7. Trout, naturally, is an offseason all by himself. His age and track record make him arguably the greatest free agent ever. Only Alex Rodriguez after 2000 and Barry Bonds after 1992 come close as modern position players. Trout ranks seventh among all active players in career WAR -- and he's less than a year older than American League Rookie of the Year Aaron Judge. He's six years younger than Albert Pujols was when Pujols got a 10-year deal and five years younger than Robinson Cano was when Cano got a 10-year contract. In July, baseball columnist Jeff Passan polled more than 60 executives on what a free-agent Mike Trout would get in the winter of 2017-2018. The high answer was $600 million, but even the lowest estimates were $50 million per year on shorter deals. Trout, we'll say, is looking for length, so signing him will be a big commitment but in many ways a relative bargain -- and an irreplaceable opportunity.

8. Most teams enter most winters with an idea of where they are in their competitive window -- whether they're adding the final piece to a title contender or entering a long rebuild -- and that dictates whether they're buying or selling and how aggressively. But Trout, the best player in baseball every year, would open any team's competitive window immediately. As such, the Braves, Phillies, Padres and White Sox see him as the star addition who could complete their rebuilds. The Tigers and Giants see him as a bridge superstar, giving their aging cores one last chance while locking Trout in as part of the next core. The Yankees and Dodgers don't bother worrying about the competitive balance tax -- not if they have any chance to sign Trout. Close to a dozen other teams push: the Cardinals, the Red Sox, the Angels, the Astros, the Nationals, the Blue Jays, the Rangers, the Cubs. Even the Marlins, now run by one of Trout's sports heroes, and the Orioles, the closest American League team (geographically) to Trout's hometown of Millville, New Jersey, schedule dinners with him in the lead-up to the winter meetings.

9. Ohtani releases his list of seven finalists: The Angels aren't on it.

10. Trout makes it clear that he wants to play for a team that's good. He's sick of looking at his career postseason stats (1-for-12).

11. Trout is expected to sign sometime between Dec. 6 and Dec. 12, as Bonds, A-Rod, Pujols and Cano all did when they were the 800-pound free agents on the market. Before that, though, there's a mini-rush by the Phillies, Braves, Padres and White Sox to improve their major league rosters so they'll be more attractive destinations for Trout. This creates bidding wars early for some of the top players on the market. The Phillies move early to get Carlos Santana, and the Padres make a huge, successful offer to Eric Hosmer. The White Sox bid aggressively for Jake Arrieta and Lorenzo Cain, and the Braves for Martinez, Wade Davis and Darvish. Their interest sparks bidding wars with bigger-market teams that realize they can't wait the free agents out when so many teams are bidding. (The Phillies end up with Arrieta and Davis.)

12. Sharing an offseason with free-agent Mike Trout subtly affects the demands of Martinez and Darvish. Each is still asking for a fortune, and each will still get a fortune, but without the pressure of being the perceived top free agent on the market, it's easier for each to get to "yes." By the Monday of the winter meetings, they're both off the board.

13. The run on free agents affects second-tier players too: Alex Cobb and Lance Lynn sign with the Twins and Brewers, neither of which is bidding for Trout but both of which are spooked into action by the rapidly thinning pool of free agents. Either:

14a. Late in the winter meetings, Trout signs with the Yankees for 10 years and $400 million. There were bigger offers on the table -- much bigger, according to some reports -- but Trout wanted to play close to home for a historic franchise in a winning cycle. A week later, the Yankees acquire Giancarlo Stanton, creating a Judge/Trout/Stanton outfield.

15a. The Phillies, one of the teams that made a much bigger offer, acquire Manny Machado in a trade and sign him to a 10-year, $400 million extension.

16a. Bryce Harper, seeing no opportunity to play for the Yankees after 2018 and having seen the upper end of the market set by Trout and Machado, agrees with the Nationals on a 10-year, $405 million extension that makes him the highest-paid player in the game.

18a. Trout, finally playing in a hitter's park, sees his raw power numbers boosted by 10 percent. By the end of the contract, he has 631 career home runs -- and has only just turned 36. His next team will see him try to chase down Bonds' all-time home run record. Bidding on him in the winter of 2027-28 is bananas.

14b. Late in the winter meetings, Trout signs with the Phillies, his hometown team, for 10 years and $400 million. There were bigger offers on the table -- much bigger, according to some reports -- but Trout wanted to play close to home for a surging franchise in a hitter's ballpark.

15b. The Nationals, one of the teams that made a much bigger offer, are panicked by their insurgent division rivals. They extend Harper for 10 years and $405 million.

16b. The Yankees, having lost the hope of Harper, move aggressively for Stanton, who then seems like an essential acquisition. Most analysts agree that they overpay.

17b. It never occurred to the Dodgers, in all the excitement, to try to get under the luxury tax. They calmly go out and vacuum up a bunch of midtier free agents, as normal.

18b. Trout, finally playing in a hitter's park, sees his raw power numbers boosted by 10 percent. By the end of the contract, he has 631 career home runs -- and has only just turned 36. His next team will see him try to chase down Bonds' all-time home run record. Bidding on him in the winter of 2027-28 is bananas.

19. Almost everybody signs by Christmas, in one of the liveliest offseasons ever. January is dominated by trades, as the Angels and Tigers race to rebuild. Among top free agents, only Zack Cozart and Upton remain unsigned.

20. Trout and his fiancée, Jessica, continue to look forward to their wedding. (Knowing how hectic this winter would be, they scheduled it for late 2018, when it'll be snowing.)