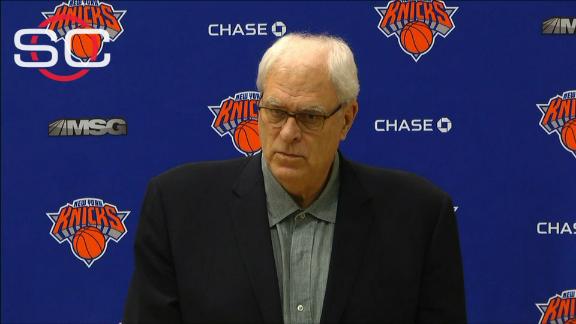 Anthony expressed concern over the direction of the franchise after the season, wondering whether the Knicks planned to compete in the near future or undergo a long-term rebuild.

"We've talked about that a little bit. 'Are we moving fast enough to accomplish goals that you have for yourself and your career?' Melo and I have talked about that: whether we're on the right time frame with him, is he disappointed or whatever? I think this is a positive move," Jackson said. "He sees that as a positive move. I think that's reinvigorating for him. I think it's good."

The Knicks obtained Rose, Bulls guard Justin Holiday and a 2017 second-round pick in exchange for guards Jose Calderon and Jerian Grant and center Robin Lopez. Rose will speak to the media at 6 p.m. ET Friday at Madison Square Garden.

Rose has one year left on his contract, worth $21.3 million. Jackson said the Knicks would like to sign Rose to a long-term contract, but that seems to be dependent on how Rose performs next season.

"This is about a season ahead of us. And Derrick's got a drive in him. I know he's going to want to do well. And we'll cross that as we go along into next year," Jackson said. "Yeah, we'd like to have a long-term [deal], and that's certainly one of the great things about it. But there's all the possibilities down the road of what's going to happen to the NBA in the future years."

Jackson said the Knicks had considered trading for Rose for several weeks, prior to hiring new coach Jeff Hornacek. Part of the motivation to trade for Rose, Jackson said, was due to the top-heavy market for lead guards in free agency.

"I'm not saying it's short, but the opportunities between top and bottom, it's pretty top-loaded and then it falls off pretty quickly," Jackson said of the group of free-agent guards. "So it was a matter of priority for us to work with this free agency coming up, it was pretty important [to trade for a guard]."

Both Jackson and Hornacek believe Rose can help the Knicks increase their pace next season, which is a goal of Hornacek's.

New York ranked in the bottom third of the NBA in pace the past two seasons, when the Knicks ran the triangle.

"I felt the need to have a decisive attack guard moving forward and made this choice," Jackson said. "It's obviously one that took three players off our roster, so it was a decision that we really had to think about it.

"I always talk about lead guard activity, and he's one of the guys you know that's decisive, aggressive and he has a very high competitive level to his game. So we felt our group needed to have some kind of aggressive play, full-court aggressive attack. This was one of the ways to get it done."

Rose has battled several injuries since he was named NBA MVP in the 2010-11 season. He has played in just 39 percent of possible games since 2013-14, due in part to two major knee injuries. Hornacek said the club will closely monitor the health of Rose's knees.

"We know he's had issues," Jackson said. "That's the unfortunate part about our game. There's always risk-reward to everything we do in this business."