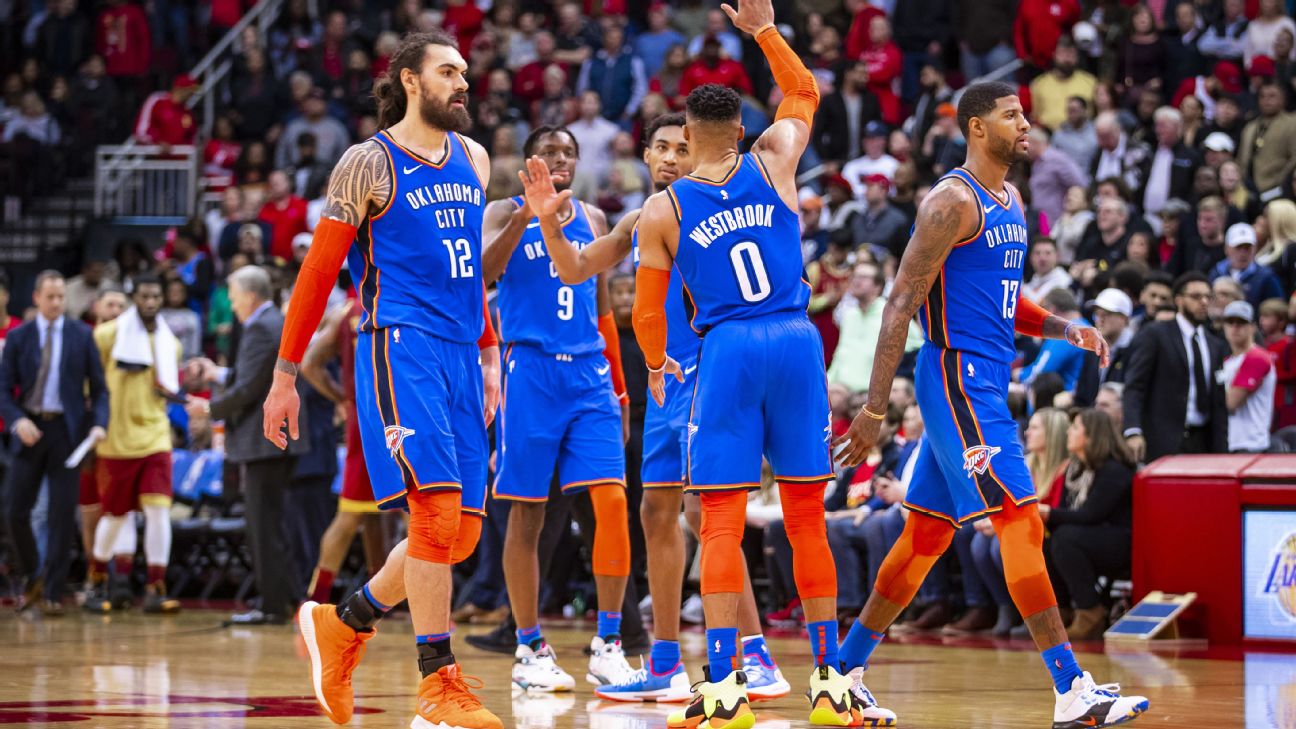 HOUSTON -- The first screen came, and like a waiter weaving through a crowded restaurant, Paul George thinly slid in front of it, keeping James Harden checked. It was narrative perfection, two MVP candidates squaring off with the game on the line, both with 40-point games running, a single stop or shot about to decide it.

Eric Gordon re-screened right after, though, and George, fighting to crawl over it, got caught just enough to force the switch.

Ten seconds remained, and the Oklahoma City Thunder led by a point as Harden sized up his new matchup, Russell Westbrook. It felt obvious what was coming; it was just a matter of if the step-back shot would go in or not. Westbrook got a quality contest, Harden landed awkwardly and the shot hit back iron. George skied for the rebound, was fouled and hit two free throws. A Houston Rockets turnover with 3.4 seconds left sealed it. The Thunder, coming back from 26 points down, stunned Houston 117-112.

George accomplished the rare feat of outscoring Harden -- 45 to 42 -- and did it on an efficient 12-of-22 shooting, including 6-of-14 from 3. He also spent the majority of the game guarding Harden, one of the toughest tasks in the NBA.

George clearly relishes the showdowns, especially against his potential MVP peers. He outplayed Giannis Antetokounmpo two weeks ago, punctuating the performance with a dunk over the Greek Freak, and sparked the Thunder in the second half on Saturday. And while it's subtle, he takes pride in the fact that, at least for him, it's a two-way matchup.

"Back in the day, that's how they went at it," George said. "That's how I was taught the game -- enjoy matchups, have fun with it."

The Thunder have won 10 of 11, the blemish a five-point road loss against the Boston Celtics on Super Bowl Sunday. The run has come in the wake of losing five of six, with George turning it around with a four-point game winner against the Philadelphia 76ers on Jan. 19. They've established an identity as a swarming defensive team that plays fast and in transition, with Westbrook's hellish paint attacks setting the table for George's patient scoring. Westbrook has willingly and openly ceded the floor to George, finding a way to mesh their contrasting styles and personalities.

But what's elevating the Thunder is their complementary parts, such asDennis Schroder who had 17 points (13 in the third quarter) and Terrance Ferguson (15 points, 3 of 5 from 3). Steven Adams is at the concrete wall in the middle, setting Richter scale registering screens and anchoring them defensively. Jerami Grant has blossomed as a Swiss Army stretch 4, hitting 3s and protecting the rim. It's a balanced roster, the most blended the Thunder have had since Kevin Durant was part of it.

Earlier in the day, though, the Thunder announced they had waived guard Alex Abrines, bringing the roster down to 12 players, after trading Timothe Luwawu-Cabarrot last week. It's actually 11, though, as starter Andre Roberson is still not cleared to play since injuring his knee last season. They're simultaneously deep and extremely thin, with a high-quality, second-unit player such as Schroder but limited inexperienced options deeper on the bench.

The development of Ferguson has been game-changing for OKC; a true 3-and-D wing who can play in any lineup for extended minutes.Abdel Nader, a player picked up last summer as a castoff by the Celtics, has added critical minutes as a floor spacer in spot minutes. And Deonte Burton, a two-way player who is a candidate to officially join the roster should the Thunder convert his contract in the next couple of weeks, played 10 important minutes on Saturday against the Rockets. Burton was a game-high plus-18 despite not scoring.

By rule, the Thunder have two weeks to bring the roster back up to 14 players. The Thunder have a few options with the remaining three roster spots. Converting Burton is one, but the likely scenario is to fill the gaps with a couple of 10-day contracts to buy time and wait out the buyout market to see who comes available. As long as a player is waived by March 1, they're eligible for a postseason roster.

It has put added responsibility on Westbrook and George, both on the floor and off, to lead the Thunder. On Saturday, as they melted down in a dismal first half, Westbrook was active in huddles, pulling aside his young teammates to tell them to stop thinking and to trust their games and play ball. Leadership is something Westbrook had to learn and evolve in, but it's a skill that has become critical to the development of the Thunder.

"There is no particular way; leadership is not all about basketball, it's not all about what the cameras see," Westbrook said. "Me, personally, I lead a lot, just not on camera. Going to guys' houses, having dinner, sitting down, learn a little about themselves. Make sure guys are confident and comfortable with what they're doing, so I take huge, huge pride in being the leader and understanding my teammates in this locker room."

On Saturday, except for the trailing by 26 part, it all kind of went according to plan for the Thunder. George was spectacular, Westbrook was a triple-doubling wrecking ball of both very good and very bad, with slightly more good, and the secondary pieces produced. It was a big win for OKC, but not one they overly celebrated. The locker room was steady and calm, with a few random shouts from Westbrook from the showers. There's a belief growing and a standard of performance expected.

"We need these. We need moments like these," George said. "We need gut-check moments just to find out what this team is about." 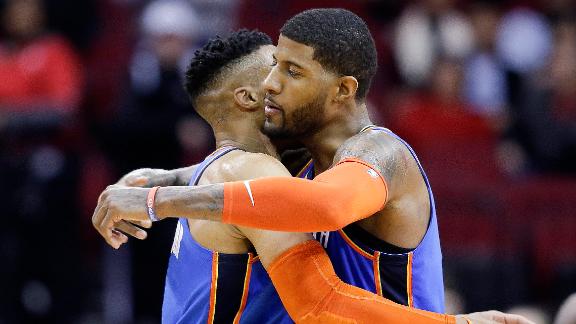 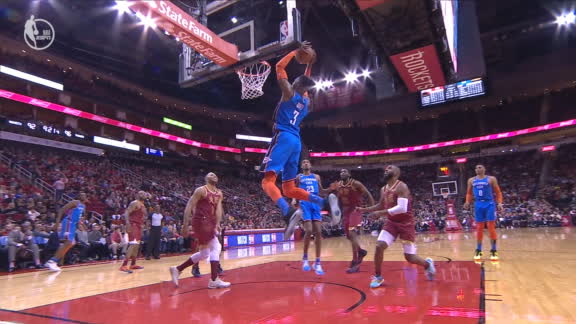 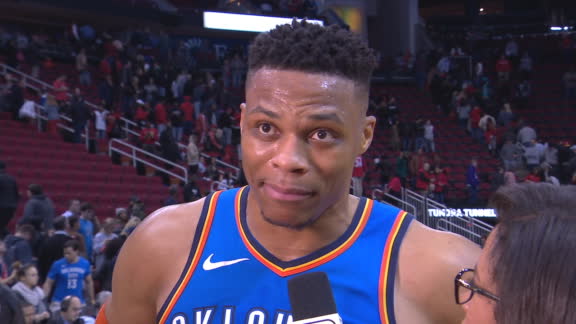