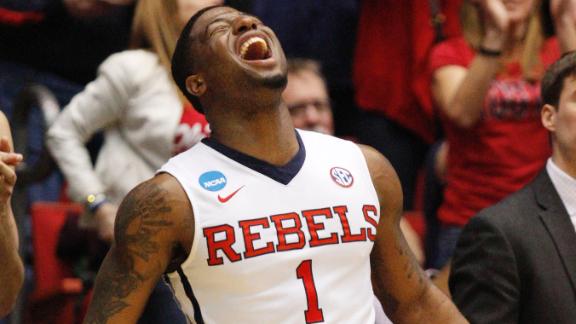 Against the team that's known for the biggest one of all, no less.

Stefan Moody scored 26 points and led Mississippi's comeback from a 17-point halftime deficit to a 94-90 victory over BYU on Tuesday night in the First Four.

The Rebels (21-12) trailed until Moody led a 15-2 run midway through the second half. He hit a late 3-pointer that helped finish it off.

It was some way to get it going.

Ole Miss goes to Jacksonville, Florida, to play sixth-seeded Xavier on Thursday afternoon in the East Region, a team that Kennedy knows well from his days as a coach at Cincinnati.

BYU (25-10) pulled off the biggest comeback in NCAA tournament history in Dayton three years ago, rallying from a 25-point first-half deficit to a 78-72 win over Iona in the First Four. This time, the Cougars couldn't hold the big lead.

"This game will sting for quite a while," coach Dave Rose said. "It was pretty similar to (three) years ago when we were here."

Tyler Haws, a senior guard who is BYU's all-time leading scorer, had 33 points but missed a 3-pointer as BYU tried to catch up in the closing seconds. It was the first time this season that the Cougars lost after leading by 17 points.

"We did enough offensively to win the game," Haws said. "We found our rhythm in the first half and got it going. It got away from us in the second half. We didn't really have any answers for them defensively."

Haws had 19 points in the first half, helping the Cougars pull ahead 49-32. Moody got the Rebels' guard-driven offense going midway through the second half, when three BYU players picked up their fourth fouls and things opened up near the basket.

"Definitely a sense of urgency," said Moody, whose 26 points were an Ole Miss NCAA tournament record. "We could have went in the locker room, sulked about it and come back out, and it would have just got worse."

M.J. Rhett added a career-high 20 points for Ole Miss, including a pair of three-point plays and a dunk during the go-ahead run.

Chase Fischer put the Cougars ahead 8-0, making a reverse layup and a pair of 3s. Ole Miss missed 15 of its first 19 shots overall as BYU took control. Fischer finished with 23 points, going 6 of 12 from beyond the arc.

Ole Miss: The Rebels held down guard Kyle Collinsworth, who set an NCAA record with six triple-doubles this season. Collinsworth didn't score in the first half, missing all four of his shots, and finished with eight points, seven rebounds and 10 assists.

Ole Miss: The Rebels improved to 5-7 in the NCAA tournament.

Ole Miss had 16 offensive rebounds to only six for BYU, resulting in 16 second-chance points to only four for the Cougars.

Ole Miss: Kennedy gets to prepare for another game against Xavier, an old nemesis. Kennedy was an assistant coach for four years at Cincinnati and interim coach for one season. Xavier and Cincinnati play an annual crosstown rivalry game.

Ole Miss Rallies Past BYU
Ole Miss beat BYU 94-90 to advance to the round of 64 in the NCAA tournament. The Rebels will face Xavier on Thursday.

Ole Miss Rallies Past BYU
Ole Miss beat BYU 94-90 to advance to the round of 64 in the NCAA tournament. The Rebels will face Xavier on Thursday.
Related topics:
sportsespnmississippi rebelsbrigham young cougarsmens college basketball
Copyright © 2021 ESPN Internet Ventures. All rights reserved.
TOP STORIES
Arrest made in case of Alvin abduction, sexual assault of a minor
20-year-old shot to death during break-in of Conroe home, police say
Man accused of dismembering mom's body after murder appears in court
Houston Astros on pace for record beer year
Astros Game 6 guide: Closures around Minute Maid Park back on tonight
The University of St. Thomas offers low-cost counseling services
JJ Watt on Texans: 'It hurts me to see where' fan base is now
Show More
More truck drivers needed to assist with US' supply chain shortage
Don't get stuck in these traffic closures this weekend
Warrant: Baldwin didn't know weapon contained live round
Prop guns: What they are and how they can kill
4 teens accused of luring victim to his death in SE Houston
More TOP STORIES News