Minnesota president stands by bans: 'Much bigger than football' 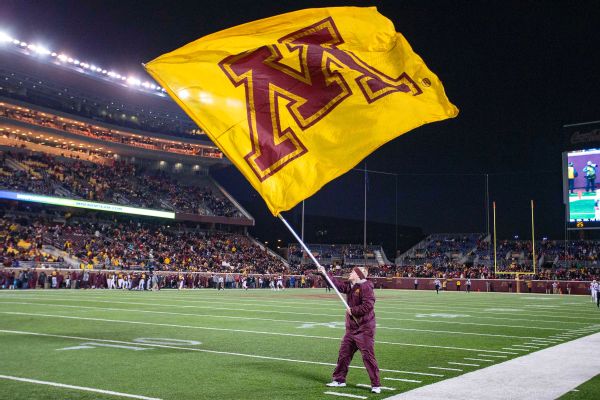 University of Minnesota president Eric Kaler said the decision to indefinitely suspend 10 members of the school's football team for their alleged roles in a reported gang rape on Sept. 2 was based on the university's "values," even though the players were never criminally charged and a district attorney declined to pursue the case because of lack of physical evidence.

After the university announced the suspensions earlier this week, players on the Minnesota football team on Thursday night announced they were boycotting all football activities in wake of the suspensions and might potentially boycott playing Washington State in the National Funding Holiday Bowl in San Diego on Dec. 27.

In a statement emailed to Minnesota student-athletes on Friday, Kaler wrote: "That certain behavior is simply unacceptable and antithetical to our institutional values. We support Gopher Athletics' decision because this is much bigger than football. It is about the values every University of Minnesota student is called on to uphold. We make these expectations clear, and when they are not met, there are consequences."

Kaler and Coyle met with a group of football players Friday night, the university said, as they tried to find common ground. But there were no decisions immediately announced when the meeting concluded.

Sources said the National Funding Holiday Bowl likely would have to decide by Monday whether Minnesota or Northern Illinois -- 5-7 NIU would be the next postseason eligible team, based on its Academic Progress Rate score -- will oppose Washington State in the Dec. 27 game. Minnesota had been scheduled to travel to San Diego on Dec. 23.

One of the attorneys representing the woman who made the allegations told ESPN on Friday that newly discovered evidence led the university to indefinitely suspend 10 players from the team on Tuesday.

The woman's attorney, Linda Miller, executive director of Civil Society, a nonprofit legal aid group in Minneapolis, said a previously released Minneapolis Police Department incident report did not include all the information that was available to university Title IX investigators. She said electronic evidence was discovered after the criminal investigation was concluded in September.

Miller wouldn't say whether the new electronic evidence was video, text messages or something else, nor would she say what it revealed.

"It obviously was enough to convince the president of the university and the other people involved that this was a very serious case in the Title IX hearing," Miller said, declining to provide further details.

Miller said she is working through the university's Title IX requirements and making efforts to keep the woman safe. Once that is done, she said, she might look at trying to get the criminal case reopened using the new evidence.

Amy Isenor, a former Civil Society attorney who represented the woman during hearings for restraining orders against the players, declined to comment when reached by ESPN on Friday.

Five of the suspended players -- running back Carlton Djam, defensive backs Ray Buford Jr., KiAnte Hardin and Dior Johnson, and defensive lineman Tamarion Johnson -- had previously told Minneapolis police that they had consensual sex with the woman. Djam told police that he recorded a portion of the sexual encounter with his cell phone.

DNA samples provided by Dior Johnson and Tamarion Johnson (not related) matched DNA taken from the woman's body during a sexual-assault exam at a hospital on Sept. 2, according to police records.

The Hennepin County attorney's office ruled in October that it wouldn't pursue criminal charges against the players because of lack of physical evidence.

According to the University of Minnesota's Office of Equal Opportunity and Affirmative Action report, which was obtained by KSTP-TV in Minneapolis on Friday, violations were broken down into three categories: sexual harassment; sexual assault, stalking and relationship violence; and student conduct code, Section IV.

Minneapolis attorney Lee A. Hutton III, who is representing each of the 10 suspended players, previously told reporters that the EOAA office recommended expulsion for Djam, Buford, Hardin, Dior Johnson and Tamarion Johnson. He said the EOAA recommended one-year suspensions for Green, McCrary, Williams and Winfield, and probation for another player, Antonio Shenault.

The woman told investigators that she was drunk and was sexually assaulted by several men in a bedroom in Djam's apartment in the early-morning hours of Sept. 2. The report said the woman started drinking shortly after the Gophers' 30-23 win over Oregon State in their Sept. 1 opener. The woman said she drank four to five shots of vodka before leaving her apartment. She attended several parties before arriving at Djam's apartment in the Dinkytown neighborhood near the university campus.

"She became 'very drunk to a level she doesn't reach often,'" the EOAA report said. "However, she does not believe that she was so drunk that she was stumbling or falling down."

The woman previously told Minneapolis police that she was sitting on a couch between Djam and a football recruit, when Djam asked her if she wanted to see his apartment on another floor in the building. The woman said Djam and the recruit took her into a bedroom, and according to the police report, "says at some point her clothes were removed, but she is unsure of how it happened." She said she remembered having sex with Djam and the recruit, and then Tamarion Johnson entered the bedroom and had sex with her.

According to the EOAA report, the woman told investigations that several other men entered the bedroom and had sex with her as well. "In addition, [the woman] recalls that numerous other men who she is unable to identify had sex with her," the report said. "[The woman] believes that a total of ten to twenty men had sex with her in [Djam's] bedroom. [The woman] cannot provide an exact number because she has limited memory of that time period and because she is unclear whether some of the men had multiple sexual encounters with her."

The incident occurred between 3:15 a.m. and 4:20 a.m. on Sept. 2, according to the report, and the woman told investigators that she "became increasingly confused and repeatedly asked where all of the people were coming from. She repeatedly yelled at the crowd to stop sending people in the bedroom. She repeatedly yelled, 'I can't handle this many people' and 'I don't want this to happen.'"

The EOAA report said an unidentified Minnesota player told investigators that he and six other men "gathered around the bedroom doorway 'saying things' and turning on and off the lights while [the woman] was having sex with one of the players." The woman told investigators that she wrapped herself in a blanket "to try to shield her body from the men, who she did not want to see her naked," the EOAA report said.

"After the sexual contact with [Djam] and the recruit, [the woman] told every man who tried to have sex with her that she did not want to engage in sexual activity with them. She felt unable to leave the situation because there were so many guys by the door and she could not get her clothes. At times, she believes that she was being held down or that her fear was preventing her from moving.

The EOAA report said the accused players "provided EOAA with different information from one another about key and notable facts. At times, the accused students provided information that contradicted their own reports to EOAA."

"These discrepancies within and between the accused students' accounts led EOAA to discount their credibility," the report said.

The EOAA report also said there was "some degree of a collective, defensive effort to conceal relevant evidence by the accused students and other members of the football team." The EOAA accused the players of trying to conceal the identities of players who were in the apartment. One player even volunteered during his interview with investigators, "I wish she didn't remember my damn name."

The EOAA report said the woman's account of the alleged sexual assault has "become more detailed as time has passed."

"For the most part, we found her accounts to be relatively consistent over time, even though they generally increased in detail," the report said. "We generally attribute the differences among [her] accounts over time to her gradual recollection of what she found to be a very traumatic experience, rather than to a lack of care or truthfulness."

On Sept. 6, according to police records, Minneapolis Police Sgt. Matthew Wente contacted Minnesota athletics director Mark Coyle and advised him of the investigation due to the "higher profile" nature of the case. A Minneapolis Police commander also advised University of Minnesota Police Department chief Matt Clark of the case on the same day.

On Sept. 9, a police investigator called Coyle again to see if he could arrange for the involved players to call police. Coyle called the investigator back and told them Hutton was representing the players.

Later that day, Wente and another investigator interviewed Buford, Hardin, Filmel Johnson and Tamarion Johnson at Hutton's office. DNA samples were collected from the players to compare with evidence from the woman's sexual assault exam.

"It would be very, very serious, and I hope the players recognize that, for their sake and the sake of the program," Dayton said. "Once again, it's how we make national news. We have so many successes in Minnesota that don't get national attention and these are the things that do ... it's a bad black eye and it will get worse if it does not quickly resolve."