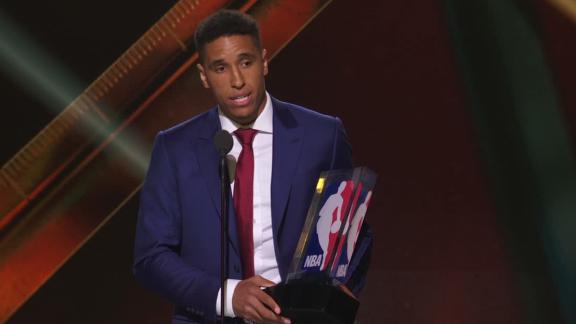 On a night that featured Drake and was capped by Russell Westbrook winning MVP, the Houston Rockets and Milwaukee Bucksmade their presence felt during the first NBA awards show.

Bucks guard Malcolm Brogdon beat out the Philadelphia 76ers duo of Joel Embiid and Dario Saric to win Rookie of the Year, while the Rockets' Mike D'Antoni won the Coach of the Year award.

Brogdon -- taken with the 36th overall pick in the second round of last year's draft -- became the only non-first-round winner of the award in the common draft era (since 1966), according to the Elias Sports Bureau.

Brogdon helped lead the Bucks back to playoffs, where they lost in the first round to the Toronto Raptors.

Brogdon, who played college ball at Virginia, is the first player to win ACC Player of the Year and NBA Rookie of the Year since Elton Brand in 1999-2000.

Under D'Antoni's leadership, the Rockets made 1,181 3-pointers in 2016-17, breaking the Warriors' record of 1,077 a season ago. He beat out Miami Heat coach Erik Spoelstra and San Antonio Spurs coach Gregg Popovich.

"I never thought I would be in New York and have to thank the sports writers for winning Coach of the Year," cracked D'Antoni, a former New York Knicks coach.

D'Antoni was named Coach of the Year in 2004-05 with the Phoenix Suns. He is the eighth coach to win the award multiple times.

A noted hoops fan, Drake served as host for the evening's festivities in New York. Will Ferrell appeared in taped segments alongside Drake, and 2 Chainz and Nicki Minaj both performed.

D'Antoni's win was the second for the Rockets on the night, after Eric Gordon beat out teammate Lou Williams and Golden State Warriors swingman Andre Iguodala to win the Sixth Man award.

A four-year veteran, Antetokounmpo is the first Bucks player to win Most Improved Player. He beat out Denver's Nikola Jokic and Utah's Rudy Gobert.

Draymond Green, sporting a teal blazer paired with shorts, became the first Warrior to win Defensive Player of the Year.

Green averaged a career-high 2.03 steals per game, leading the NBA. He beat out two-time defending champ Kawhi Leonard and Gobert.

Russell engaged in some good-natured trash talk, pointing to his fellow greats and saying, "I would kick your ass," much to the raucous delight of the audience.

Russell won 11 championships as a player with the Boston Celtics and went on to become the NBA's first black coach.

Spurs vice president Monty Williams received the first Sager Strong Award for the courage he has displayed after his wife died following a car accident in 2016. He was given a colorful jacket like the ones worn by Craig Sager, the longtime Turner Sports reporter who died of cancer in December.

Other winners included: the Warriors' Bob Myers for Executive of the Year, Boston Celtics guard Isaiah Thomas for the Community Assist award, Charlotte Hornets guard Kemba Walker for the Sportsmanship award and Dallas Mavericks forward Dirk Nowitzki for Teammate of the Year.