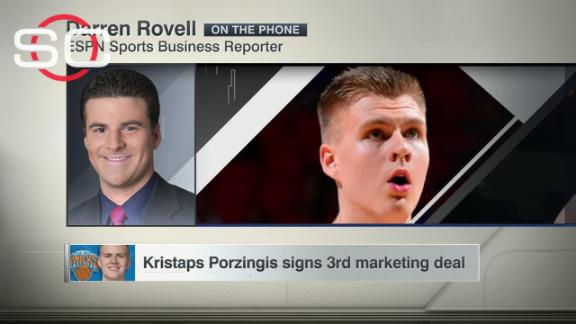 Porzingis, a 7-foot-3 Latvian who was soundly booed in Brooklyn's Barclays Center when his name was announced as the fourth overall pick in the NBA draft in June, signed his third marketing deal on Wednesday. Sports drink BodyArmor will join two recent deals he signed with Delta Air Lines and Shifman Mattress.

Porzingis says all of his early endorsement deals come out of necessity. His representatives made a deal with Delta because of the tremendous amount of flights his family needed from Latvia. He became a spokesman for Shifman, a New Jersey-based company, after it promised an athletic king mattress for Porzingis, who has had sleeping problems because of his size for the last five years. And BodyArmor just became his sports drink of choice.

"I saw other players drinking it, and so I bought it in the store and really liked it," he said of the drink, which is endorsed by the likes of James Harden and Klay Thompson and counts Kobe Bryant as an equity partner.

Porzingis will be featured on BodyArmor in-store advertising as well as on billboards throughout the New York area. Later this month, the company will have a "12 Days of Kristaps" promotion in which consumers will have 12 days to enter a radio-station contest that will allow the winner to meet Porzingis.

"Kris has been on our radar since the draft, and it's a great partnership for us because he really loves the product," BodyArmor co-founder and chairman Mike Repole said. "By the time he would have been noticed by the other sports drink companies he would have had to have won two titles and had 10 All-Star appearances."

Porzingis, who has shocked many with his mobility and outstanding range for his size, has turned into a marketing phenomenon among Knicks fans who have long clamored for something new to talk about.

In the last month, his jersey is the sixth-most popular on NBAStore.com and on Fanatics, surpassed only by those ofStephen Curry, Bryant, LeBron James, Michael Jordan and Kevin Durant.

"I've always dreamed of playing here, but to see so many people wearing jerseys with my name on them, it's really amazing to see," Porzingis said.

Demand for Porzingis in the collectibles market can be seen on eBay, where 42 autographed cards have sold for at least $300.

Hour-and-a-half appearances by Porzingis around the draft cost $3,000. That number has been bumped up five times to past $10,000, said Chris Brantley, vice president of marketing for ASM, the agency that represents him. Brantley said an exclusive autograph deal is on the horizon as are discussions for a new shoe deal. His deal with Nike expires at the end of the season.

It's a remarkable turn of events for Porzingis, who among rookies this year is third in points at 14.6 per game and third in minutes played at 28 per game. On Nov. 17, fans whom the New York Daily News described as "Zinging The Blues" on its cover the day after the draft, were on their feet at Madison Square screaming "Por-zin-gis!" as he scored a career-high 29 points against the Charlotte Hornets. After scoring 28 against his idol,Dirk Nowitzki, on Monday, Nowitzki praised Porzingis, saying, "He's way better than I was at 20."

"I think I've surprised a lot of people," Porzingis said. "The stereotype of European players is that they take a couple years to adjust to the league. Well, it's been easier for me. I've been preparing for this since I was a kid."

Not only does Porzingis surprise with his game, but those who have caught his interviews are surprised with his grasp of the English language, a product of his brother Janis' recommendation to take extra classes when he was a child. He also speaks Spanish, according to Brantley.

Knicks fans have been quick to try to come up with a nickname for him, including such lofty names as "Porzingod" and "Godzingis." As for Kristaps himself, he said he prefers "KP6," which combines his initials and jersey number.