KTRK
KATY, Texas (KTRK) -- The one-time captain of the highly-touted Katy High School football team is no longer enrolled at the campus.

On Thursday, a family representative confirmed to ABC13 that Bronson McClelland withdrew from the school and will finish his primary education in California.

While the withdrawal is being indicated as a family decision, the 18-year-old's representatives are taking issue over how Katy ISD handled the aftermath of a racially charged video involving the teen.

"The incident in question involving Katy starting quarterback Bronson McClelland directing a racial slur at a rival in Oct. 3, 2019. The exchange was shared via social media, but McClelland is adamant the word in question was used in a colloquial fashion, and not as an insult," the statement read.

The teen's reps explained, "Among McClelland's diverse friend group, the use of the 'n-word' is not used in a derogatory manner and reflects pop culture usage by musicians and rappers."

They also reasoned that Katy ISD had no place to send the release in October 2019 to parents since the video was taken off school district property.

"As a result of the press release, McClelland was suspended for two games last season and was removed from a team captain role. A college scholarship offer was rescinded, and other opportunities are also in jeopardy," the statement continued.

In the wake of the video, Colburn McClelland, Bronson's father, confirmed his son's actions on the tape, while also expressing regret about what happened.

"Bronson made a poor decision," Colburn McClelland said shortly after the video was made public. "The discipline and the punishment that has been handed down to Bronson is tough, fair, and hopefully a life lesson to our son."

The McClelland family's statement also made clear that Bronson posted a tweet shortly after the incident, taking responsibility for his actions

"After last night's win over the Tompkins Falcons, I made comments on social media that were not appropriate under any circumstances. Being in a leadership role, I put my family, teammates, coaches, school and community in a bad light," the teen posted last year.

The 18-year-old was entering his senior year at Katy High School, which has generally ranked among the best football programs in Texas. His reps said he has already gotten offers to play at the college level, but has been hoping to get interviews with University of Texas and Texas Christian University.

My name is Frank Carroll and I am an attorney representing Bronson McClelland. I am writing this letter on behalf on Bronson McClelland in an effort to correct the record, and give insight into the facts and circumstances surrounding the erroneous allegations made against this young man by his school district. The District made several material statements that were false, misleading, and harmful to the student.

These false, misleading, and harmful statements of condemnation were supported by an affirmative representation to the media and the community that a multi-agency investigation had occurred, including an investigation by the City of Katy Police Department. No such investigation occurred. The District used this imaginary investigation to erroneously confirm the speculation swirling in the community, namely that a white student had used the n-word to taunt a black player on the opposing team. Let me be clear: this did not happen.

During the course of my investigation, additional evidence has shown that Bronson McClelland did not send a racially-charged video to a member of an opposing team. Furthermore, the recipient of the private video was not African American. The evidence shows the video of Bronson McClelland was privately sent to, and directed at, a Hispanic male student, who for unknown reasons, distributed the video to others. This student distributed the video to the African-American student athlete, who then uploaded the video to Twitter after a rivalry football game. These facts were made known to the District, but the District has refused to correct the record.

Bronson McClelland has publicly-acknowledged his mistake, and has since gone on to be a leader of a diverse team during trying times. I hope this letter has provided important clarification of the facts - facts that were omitted from the press release issued by the District.
Report a correction or typo
Related topics:
sportskatyhigh schoolviral videofootballracismkaty isdhigh school footballrace in america
Copyright © 2020 KTRK-TV. All Rights Reserved.
HIGH SCHOOL FOOTBALL 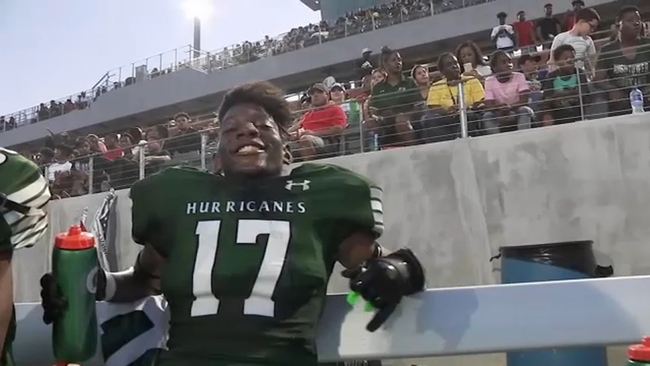