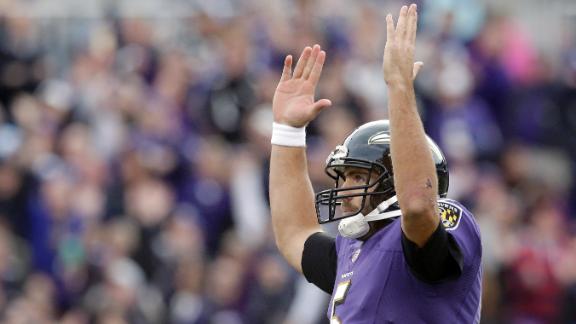 As the Ravens celebrated a 21-7 win over the Tennessee Titans, Harbaugh was shown in the locker room saying, "That team beat us last week and then went and got their ass kicked this week."

Harbaugh was referring to the Steelers, who had routed the Ravens the previous week and were upset by the New York Jets 20-13 on Sunday.

Harbaugh was asked whether he was still upset even after CBS released a statement apologizing for the mistake.

"I never gave it any thought, one way or the other," Harbaugh said. "You'd like to have your 10 minutes of private time with your team. We're going to talk to our team in an honest and straightforward way. We'll tell them what we think. Our guys deserve to hear that. I'm quite sure nobody's offended by that. I don't think any other team in the league cares what a coach says to his team after a game. I'm not too worried about that."

The Ravens later issued a statement after the team learned that a local Pittsburgh television station led with Harbaugh's comments for its evening news and the video was making its rounds on the Internet.

Asked whether he would limit others access going forward, Harbaugh said, "I don't really have a total say in that. That's one of the great things about the NFL is the access that the fans get. You'd like to have a moment with your guys, but I'm not going to say anything in there that I'm going to be ashamed about. We'll take it as we go."

Ravens Top Titans
Justin Forsett rushed for 112 yards and two touchdowns in the Ravens' 21-7 win over the Titans.