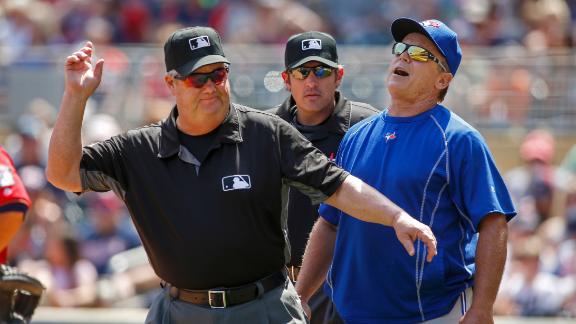 MINNEAPOLIS -- Toronto manager John Gibbons was ejected from the Blue Jays' 3-1 victory over Minnesota on Sunday. It was the fourth time he has been tossed this season.

A day after Toronto's Josh Donaldson was ejected by umpire Toby Basner in the first inning, Gibbons got an early exit from crew chief Joe West in the fifth.

Donaldson homered in the first inning Sunday and stared at the Twins' dugout as he crossed home plate.

Minnesota starter Phil Hughesthrew two pitches to the AL MVP in the fifth, one inside and one behind him. Donaldson expressed his displeasure to plate umpire Mark Ripperger.

Gibbons came out of the dugout and argued with Ripperger and West, who came in from his spot at first base, then was tossed.

"The guy's a strike-throwing machine. And then there's a tight pitch, and then he throws behind him," Gibbons told Sportsnet of Hughes. "I thought they were going to chuck him. But you never know what's going to happen nowadays, if you want to know the truth. Whether it's warnings, the guy gets thrown out or nothing. You never know."

Toronto starter Marcus Stroman hit Kurt Suzuki with a pitch in the bottom of the inning.

"Major League Baseball has to do something about this," Donaldson told Sportsnet on Sunday of almost being hit twice by pitches he deemed to have been intentionally thrown at him. "They say they're trying to protect players. They make a rule that says you can't slide hard into second base. They make a rule to protect the catchers on slides into home. But when you throw a ball at somebody, nothing's done about it. My manager comes out to ask what's going on, and he gets ejected for it. That's what happens.

"I just don't get the point," Donaldson continued. "I don't get what baseball's trying to prove. If I'm a young kid watching these games, why would I want to play baseball? Why? If I do something well or if somebody doesn't like something that I do, it's, 'Oh, well, I'm going to throw at you now.' It doesn't make sense. It just doesn't make sense to me."

Gibbons was ejected from last Sunday's game at Texas, then he returned to the field during a brawl between the teams, and that earned him a three-game suspension for both the return and inciting fighting.