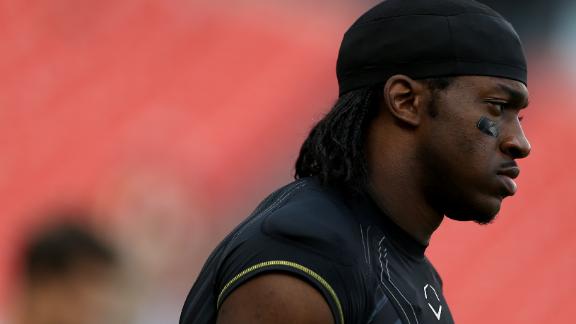 ASHBURN, Va. -- Robert Griffin III isn't the Redskins' starting quarterback -- but he might not be done in Washington.

But Gruden said he could live with Griffin staying on the roster all season, even as a backup.

"I have nothing against Robert," Gruden said. "I like Robert as a quarterback, no doubt about it. His future is with the Washington Redskins."

Some high-ranking Redskins officials and coaches want to part ways with Griffin but are meeting resistance from team ownership, team and league sources told ESPN on Sunday.The Redskins even have had trade conversations about Griffin with a handful of NFL teams, but they have found no interest, according to sources.

Gruden denied, however, that the Redskins have considered ending Griffin's tenure with the team.

"There have been no discussions about letting him go or doing any of that stuff," Gruden said. "The door is not shut on Robert Griffin."

If the Redskins were to release Griffin, it would count $6.7 million on their salary cap. They could trade him, but that could be difficult, in part because of the $16.12 million option Washington picked up for 2016.

However, a source said that Griffin could renegotiate the option to help a trade.

If Griffin does stick around, Gruden said he wasn't sure yet whether he would be the No. 2 quarterback or the No. 3, behind Colt McCoy. Griffin remains in the concussion protocol and might not be cleared until later in the week. McCoy is the only quarterback who will play in Washington's preseason finale Thursday against the Jacksonville Jaguars.

Gruden said he knows Griffin's presence could become a distraction, especially to Cousins.

"It could be," Gruden said. "[But] Kirk has been here long enough and everyone understands the dynamic Robert brings. He's a high-profile player, and deservedly so.

"Moving forward, when you're the starting quarterback, it's your job to keep that job. You can't let that outside noise influence you as a player. If there's an incompletion or interception, I'm sure there could be some chatter about putting Robert in. We're not worried about that."

Griffin was removed from the lineup for the final three games in 2013 and was benched at one point last season, only to start the final two games after McCoy was hurt. During his previous benchings, Griffin kept a low profile.

"I can't say enough about the class act Robert has been from the day I was drafted to now," said Cousins, who was picked in the fourth round of the 2012 draft. "The way he has treated me, the way he has handled a lot of adversity -- I have marveled at his ability as a rookie to never flinch, to compete as a young player in this league and win rookie of the year and taking our team to the playoffs and winning the division. I marveled at that.

"The way that he is a fierce competitor, I've always respected. He has always been a guy who remains classy, works very, very hard and I've learned from that example."

Still, it's quite a reversal of fortune for Griffin, the 2012 offensive rookie of the year. He opened each of his first three seasons as a starter. Griffin was not made available to the media Monday.

"Robert is a pro," Gruden said. "We have a lot of respect for what he's accomplished here, 2012 and moving forward with the new offense. He's done some great things. Really, this is about Kirk doing an excellent job and winning the job. Robert is disappointed, as I'm sure Colt is disappointed. When you have three tough-minded quarterbacks, it's hard to pick -- but it's my job as a coach to make a decision."