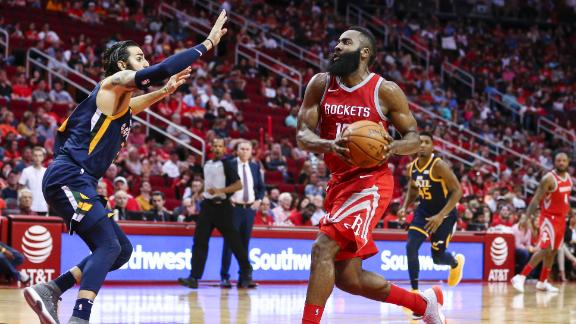 Harden was 19-of-25 shooting, including 7-of-8 from 3-point range, to become the first NBA player to score that many points on 25 or fewer shots since Michael Jordan's58-point performance against the New Jersey Nets on Feb. 26, 1987. Karl Malone was the last NBA player to score that many points with a field goal percentage as high as Harden's .760, when "The Mailman" scored 61 points on 21-of-26 shooting against the Milwaukee Bucks on Jan. 27, 1990.

Harden, who also recorded 13 assists to account for a total of 91 points in the victory, shrugged off his phenomenal shooting display.

"I was just shooting it, I don't know," Harden said. "I don't really pay too much attention to it. I just try to take good shots and, like I said, pretty much make the right decision. Obviously, I'm going to make mistakes, but as long as I have that mindset, I'll be good.

"I've just got to be aggressive. Be aggressive, good things happen, not just for myself but for my team. I was still able to dish off a couple of assists and get guys involved still. I've just got to have that mindset every single game."

Harden's 56 points were one shy of the Rockets record set by Calvin Murphy, who poured in 57 against the Nets on March 18, 1978. Harden missed his final three shots before checking out to a standing ovation from the Toyota Center crowd with 7:32 remaining in the game, but he indicated that he didn't care about chasing the franchise scoring record.

"We won, right?" Harden said after being informed by a reporter that he was only one point shy of Murphy's mark.

It was the sixth 50-plus-point performance by Harden, all in the past four seasons. It was his third performance with at least 50 points and 10 assists, all coming since the start of last season, tying him withOklahoma City'sRussell Westbrook for the most such outings over the past 30 seasons, according to ESPN Stats & Information.

A Jazz defense that ranks among the league's stingiest was shredded by Harden, who was spectacularly efficient shooting off the dribble. Harden made his first 10 shots from the floor and 19 of his first 22. He eclipsed his previous career high of 53 points when he made a driving layup in the last second of the third quarter.

"I don't think there's really any defense for him, period, but when he's on, what can you do?" Rockets small forward Trevor Ariza said. "Two people can't guard him when he's on like that."

Harden, last season's MVP runner-up, had 22 points on 8-of-8 shooting in the first quarter. He hit a pair of 3-pointers in the final nine seconds of the frame and crouched for several seconds after hitting a pull-up 3 over Jazz point guard Ricky Rubio to beat the end-of-quarter buzzer.

Before Harden, the only player to drop 50 in a game for coach Mike D'Antoni was Amar'e Stoudemire, who finished with 50 points as a member of thePhoenix Sunson Jan. 2, 2005, against the Washington Wizards.

"You can tell just by the bounce in his step and his 3s," D'Antoni said when asked when he knew Harden was destined for a phenomenal night. "The last two games, he's just been going straight up and down. He's pure. So even when he's taking the shot, you can say, 'This is probably in.' He's not drifting or anything. It just means he's strong up and down, and his balance getting around people was ridiculous tonight.

"So he had an extra spring in his step, and maybe he's just getting into game shape and getting going."