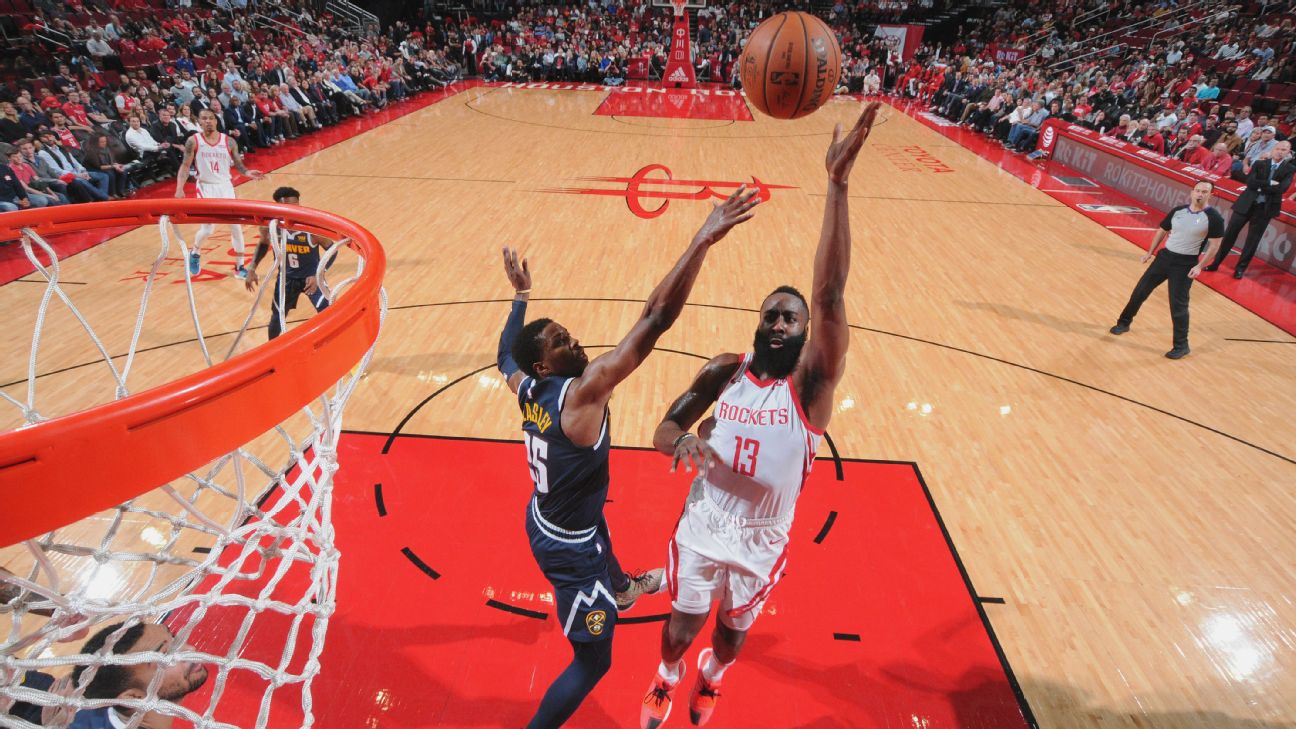 HOUSTON -- James Harden splashed 3-pointer No. 3 in the second quarter, then turned to Torrey Craig and told him what the rest of the Denver Nuggets would soon find out Monday in a 125-113 loss to the Houston Rockets.

It wasn't for lack of trying. Denver attacked Harden early with traps and double-teams on nearly every possession, resulting in the point guard putting up only one shot in the opening quarter. But instead of forcing matters, the NBA's reigning MVP relied on the supporting cast to notch his third consecutive points (32) and assists (14) double-double, asClint Capela scored a career-high 31 points and PJ Tucker contributed a career-high seven 3-pointers for his 21 points.

Harden certainly did that after a relatively rough start in which he scored four points in the first quarter -- all from the free throw line.

Harden produced his 10th game with at least 30 points and 10 assists this season, which ranks as the most in the NBA; no other player in the league has had more than three such outings. Perhaps Harden's most impactful sequence came near the end of the second quarter.

Harden didn't connect on his first field goal attempt until there was just 1 minute, 49 seconds remaining in the opening half, and he did it in dramatic fashion. Remember his crossover last season that sent Wesley Johnson stumbling to the floor before Harden hit a 3? Well, he produced a reboot of that show on Monday, this time with Jamal Murray serving as victim of the 27-foot, step-back 3 that resulted in a foul shot the MVP would make.

"He still had a boatload of points, and they double-teamed him on every play, which is unbelievable," Rockets coach Mike D'Antoni said. "Plus, at halftime, I think he had 18 points on six shots. His efficiency is off the charts. Whatever they throw at him, he will find the best play. He'll also find a way to score. He'll find his way, but he'll get everybody involved."

After sinking his initial basket, Harden hit another 3 on Houston's next trip down the court before making another with 16.8 seconds left in the half over Craig.

The Nuggets hard-trapped Harden along the perimeter in the first half, and he adjusted by making plenty of pinpoint bounce passes inside, cross-court passes to the corners and lobs in the lane. Tucker and Capela, Harden's primary screeners, combined for 34 points in the opening half, with Tucker hitting 5 of 7 from deep, mostly on corner 3s.

Once Capela started rolling, Houston was in total control, as Denver didn't know whether to continue guarding the perimeter or collapse inside to help on the Rockets' big man.

"I like the fact that when Clint Capela gets down there, instead of sometimes kicking it back out, man be aggressive and go get a bucket because you've got to guard that," Green explained. "And that wears on you throughout the course of the game, and today was a prime example. They didn't know whether to help on Clint Capela and leave the 3 open. I think that's why I got a lot of shots. Then, when we started hitting shots, Clint Capela started getting open again. When we've got all cylinders clicking, we're tough to beat."

Houston has captured victories in 12 of its past 14 outings and remains undefeated at the Toyota Center since the start of December.

Capela's career milestone took on extra meaning because he achieved it going head-to-head with Nuggets center Nikola Jokic, who led Denver with 24 points but added a season-high eight turnovers.

"From the defense that they gave us, whenever I'm under the rim and you put a little on me, what's going to happen is that 99 [to] 100 percent of the time, I'm gonna dunk the ball," Capela said. "So that's what happened tonight. I did a good job of finishing aggressive under the rim. That's the kind of game that I wanted to have. It means a lot." 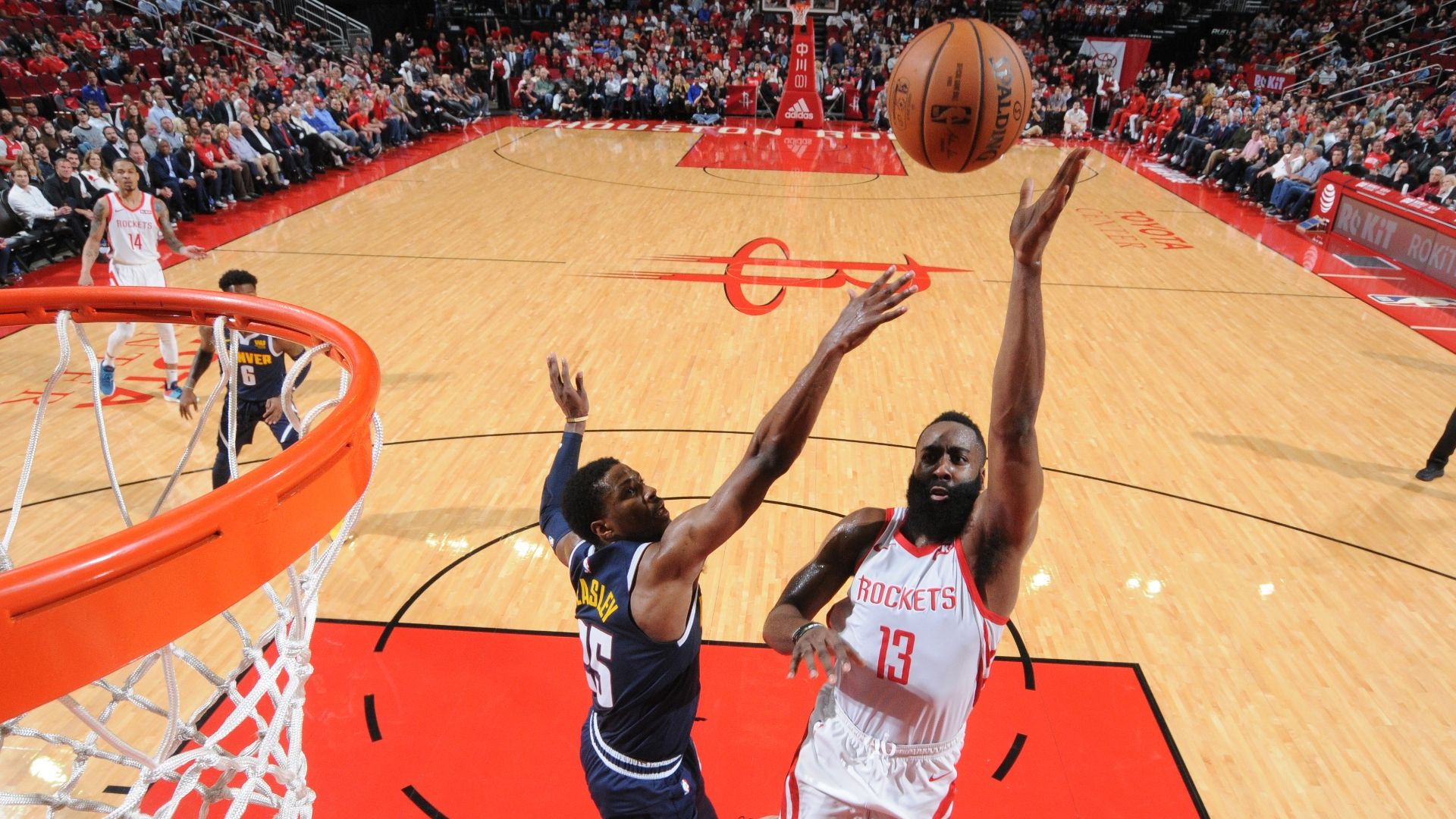 Harden's double-double carries Rockets past Nuggets.
James Harden has a big night with 32 points and 14 rebounds as the Rockets defeat the Nuggets 125-113.

Harden drops Murray and drains 3.
James Harden goes behind the back to break down Jamal Murray and follows up by splashing a 3-pointer.