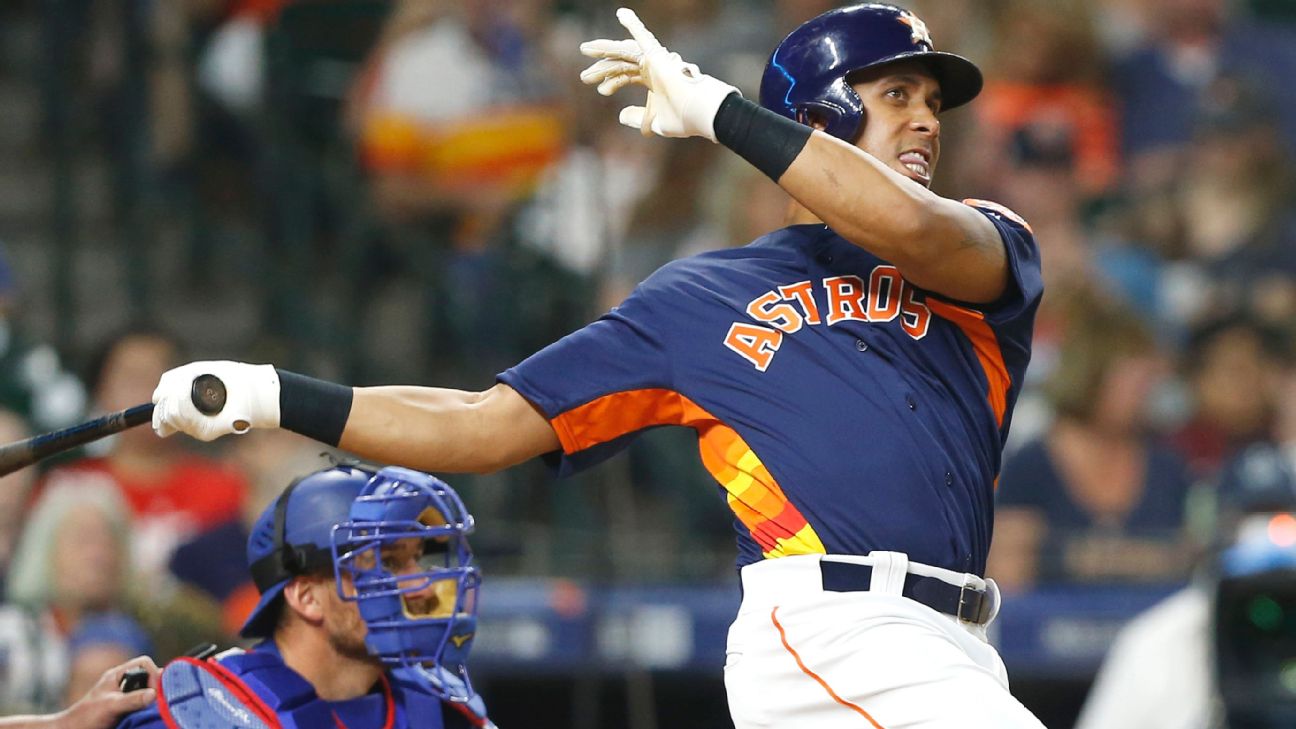 ESPN
By Joon Lee
Some days, Michael Brantley thought the injuries were going to get the better of him, that they would zap what were supposed to be the prime years of his major league career. Brantley was the next big thing, the next blossoming star at the plate for the Cleveland Indians. His 2014 season, which featured an All-Star appearance, a Silver Slugger award and a third-place MVP finish, cemented that status.

One awkward dive for a fly ball put a potentially bright future up in the air.

Brantley had another strong season in 2015 but injured his right shoulder trying to make a diving catch that September. When rest and rehab didn't do the trick, Brantley underwent surgery in November. His spring training was delayed a bit, but he got into 11 games in late April and early May before hitting another roadblock. Something still wasn't right, and by August everyone recognized the reality: A second surgery was needed to address issues with the shoulder and biceps, further clouding Brantley's future.

"You really never know if you're ever going to come back," Brantley said last week.

Brantley bounced back impressively in 2018, hitting .309 with 17 homers and 76 RBIs, and this season he's back at the center of baseball's buzz as a member of the first-place Houston Astros, providing a much-needed left-handed bat in a right-handed-heavy lineup that features Jose Altuve, Alex Bregman, Carlos Correa and George Springer.

And for the first time since the injury, Brantley looks like a star again, at least through the first two months of the season, hitting .326/.374/.561 with 10 homers and 14 doubles in 48 games. And his .325 BABIP, consistent with his career average, suggests Brantley isn't just the beneficiary of a lucky stretch.

What pulled everything together on the field, as the injury slowly healed, was the years and years of routine upon which Brantley had built his success. The routine evolved as he evolved through his major league career. Before every game for the past six seasons, regardless of whether his name is in the lineup, Brantley has gone through the same steps to prepare his mind.

First, a rhythm drill followed by work on the tees. Next up is a one-handed bat drill before he hits on the field. Then he goes through a variation of the early part of his routine. Day after day, month after month, year after year.

As his routines helped things come back together on the field, Brantley, 32, said that wouldn't have happened without everything that held him together off of it. When things felt as if they were falling apart, it was the little things, like the breakfast and coffee made by Brantley's wife, Melissa, that got him through the day.

"There were some dark days in there, rehabbing in the cold and things weren't always going well. I stayed in Cleveland all offseason, worked out there, went in during the weekends on my own because I was so committed," Brantley said. "Having a wife that was supporting me, having a family that was supporting me to do this, it meant the world to me for the dark days where you didn't want to get up and do it. You look at the kids and you're doing it for them. That's the extra motivation."

After he was fully recovered physically, Brantley had to make another adjustment this year when he left the team he had been with since his major league debut and joined Houston, signing a two-year, $32 million deal this offseason.

"It's an adjustment period when you first switch to a new team after being with Cleveland for a long time," Brantley said. "They welcomed me here with open arms. The coaching staff has been great to me. They made me feel comfortable here really quick."

Beyond his left-handed bat, Brantley brought another veteran presence to the Houston clubhouse. From afar, many on the Astros admired Brantley's ability to always take a good at-bat. But the players and coaches quickly realized Brantley brought just as much to the team off the field.

"He's always watching," Springer said. "I have learned that he's always watching and always listening, just in his own Michael Brantley way. He doesn't miss a beat and he knows what's happening with everybody. He's very observant and he can tell if there is something wrong with my swing or Jose's swing. He's only been here for three or four months and it's a testament to him because he's watching everything that happens."

Brantley's success -- he's on pace to cruise past his career high of 20 home runs while posting a career-best slugging percentage -- has added an extra dimension to the Astros' lineup. Through the first quarter of the season, Houston has a wRC+ of 134, a stat that calculates the value of a team's offensive production in relation to its era. That figure -- albeit with a small sample size -- puts the Astros above the 1927 Yankees (126 wRC+) and 1930-31 Yankees (124 wRC+), who had lineups featuring guys named Babe Ruth and Lou Gehrig.

"I know I'm going to get good pitches to hit because he's such a presence in our order," Bregman said.

Brantley's teammates know what he has been through, what it took for him to get back to this place. It's what has made him the role model of consistency. Day after day, month after month, year after year. It's what has earned him a new nickname and leadership role in the clubhouse.

"I call him Uncle Mike. He's always on me, doesn't ever let me get down," Springer said. "Doesn't ever let me get too high. Just wants to make sure I consistently do the right thing every day, that I prepare to play the same way every day, which is something I didn't really do before, just get to the park and do what I needed to do. Obviously, I respect the amount of time he has in this game and I respect him as a person. When he speaks, I listen."
Report a correction or typo
Related topics:
sportsespnmlbmichael brantleygeorge springerhouston astros
Copyright © 2020 ESPN Internet Ventures. All rights reserved.
More Videos
From CNN Newsource affiliates
TOP STORIES