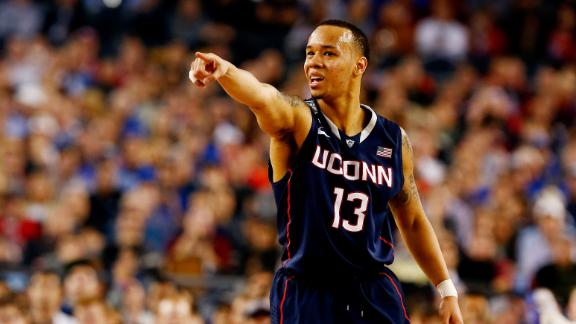 The Miami Heat have started the process of courting LeBron James with an aggressive attempt to move up in Thursday's NBA draft, with their target being former UConn point guard Shabazz Napier, league sources said.

James' agent told the Heat on Tuesday that the four-time NBA MVP will opt out of his contract and become a free agent July 1. The move, however, does not mean James has decided to leave Miami, sources said.

Both James and the Heat are fans of Napier.

James tweeted during the NCAA title game in April: "No way u take a PG in the lottery before Napier."

Heat president Pat Riley, meanwhile, also is fond of Napier. Riley likes four-year players who can come in and contribute right away.

Right after the NBA Finals, Riley flew out to work out Napier, a Heat source told ESPN.com. After the workout, the Heat tried to convince the former Huskies star to stop his workouts so that he'd fall to the Heat with pick No. 26.

The Heat, though, are probably too late.

Napier has been one of the hottest names in the NBA draft the past few weeks, and there's almost no chance he falls to the 26th pick.

Teams as high as the Orlando Magic at No. 12, the Atlanta Hawks at No. 15, the Chicago Bulls at No. 16 and the Boston Celtics at No. 17 are all seriously considering drafting Napier, according to various team sources. And it's unlikely he slides past the Toronto Raptors at No. 21.

Moving up in the draft, however, will be difficult for the Heat.

They have the 26th pick and point guard Norris Cole to offer a team -- but that's about it. If Dwyane Wade and Chris Bosh opt out, Justin Hamilton will be the only player the Heat have under contract for next season. And the team can't offer Wade or Bosh in a trade until the players officially decide whether or not to opt out by Monday. The team can't even offer a first-rounder next season because the Cleveland Cavaliers have the Heat's pick in 2015 if it falls between Nos. 11-30.

Will a package of Cole, No. 26 and a first-round pick in 2017 be enough to lure a team into a deal? The Bulls and Celtics have been exploring trade options and could be enticed. Chicago is looking for a backup point guard to Derrick Rose, but it may get stronger offers from elsewhere.

How Will LeBron's Opt Out News Affect Draft?
Chad Ford explains how the news that LeBron James will opt out of his contract has affected Cleveland's draft plans and if Andrew Wiggins is favored to be selected No. 1 overall.
Related topics:
sportsespnshabazz napierlebron jamesnbapat rileynba draftmiami heatnorris cole
Copyright © 2021 ESPN Internet Ventures. All rights reserved.
More Videos
From CNN Newsource affiliates
TOP STORIES