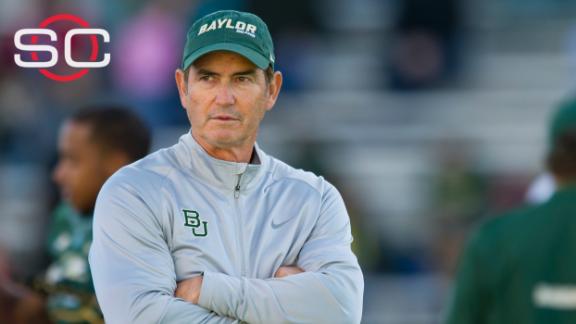 The motion, part of the Title IX civil rights lawsuit filed in March by a sexual assault victim, says the university was keeping Briles in the dark about plans to settle the lawsuit, including not informing him of a meeting scheduled for Friday between Baylor officials and plaintiff Jasmin Hernandez and her attorney to possibly mediate and settle the case.

ESPN does not normally name victims of sexual assault, but Hernandez came out publicly with the filing of the lawsuit. In 2012, Hernandez, a former Baylor student, was raped by former football player Tevin Elliott. He was sentenced to 20 years in prison and fined $10,000 for sexually assaulting Hernandez, and his criminal trial revealed allegations of rape by three other women and a misdemeanor for trying to assault another woman.

A letter included with the motion filed Thursday states that Briles does not want to settle the case and implies that the school is using Briles as a scapegoat in the ongoing Title IX and sexual assault controversy.

"The conclusion is inescapable that the motive of Baylor University and the Board of Regents was to use its Head Football Coach and the Baylor Athletic Department as a camouflage to disguise and distract from its own institutional failure to comply with Title IX and other federal civil rights laws," the letter states, reflecting the first public comments Briles has made on the controversy since his termination in May.

"It is equally clear from the actions of Baylor University and the Board of Regents, both in the media and in its oral and written communications with Coach Briles since his wrongful termination, that they have ignored and repeatedly violated the clear duties that they owe under Texas law and by contract to Art Briles."

Baylor has been at the center of nationwide attention over its handling of sexual assault allegations and investigations, including several that have involved athletes. In recent weeks, Baylor has dealt with the fallout from that negative attention: the demotion and then resignation of former university president and chancellor Kenneth Starr; the firing of Briles; the suspension and then resignation of athletic director Ian McCaw; and the firings of multiple athletic department employees.

Despite being a private school, Baylor is required by the federal Title IX statute to investigate allegations of sexual assault and violence thoroughly and to provide security, counseling services and academic help to those who report assaults. Part of the law's goal is to help keep victims in school.

Hernandez's lawsuit names Baylor University, Briles and McCaw as defendants. In the motion filed Thursday, Briles is asking to be represented by his own counsel separate from the firm representing Baylor. A separate Title IX lawsuit, filed Wednesday, names only the university as a defendant.

Attorney Alex Zalkin, who represents Hernandez, said he wasn't concerned about the "infighting" between Briles and Baylor and is focused only on Friday's settlement mediation meeting.

"There have been no discussions other than let's sit down and talk," Zalkin told the Associated Press on Thursday. "That's some infighting between them. We'll let them figure out who is representing who."

Attorneys for Baylor did not immediately respond to messages left by Outside the Lines.

Cannon has asked that Baylor attorneys hand over all materials provided to them by Briles and cease using any of Briles' information in defense of the lawsuit against the school, which was filed March 30. The motion indicates Briles said he provided Baylor attorneys with information pertaining to the case, believing they were "looking after his interest in all respects."

The motion states, however, that the attorneys took several actions to keep him from receiving documents and made comments on his behalf -- without his knowledge -- that he and the university wanted to settle the lawsuit quickly.

The motion also alleges that Baylor used information provided by Briles -- statements, text messages, emails and other information -- to support the firing of the coach two months later.

The motion includes a letter sent by Briles' attorney to Baylor attorneys on Thursday. That letter states Briles was terminated as head coach on May 26, and that by continuing to act as representatives of Briles in the lawsuit, Baylor attorneys faced a conflict of interest. Although when university officials addressed Briles' status to the media on May 26, they said that he had been "suspended with intent to terminate."

The motion also accuses Baylor of "breach of contract, fraud, libel and slander, misrepresentation, breach of fiduciary duty, negligence and intentional infliction of emotional distress, among others."

The letter states, "Mr. Briles does not wish to settle the Hernandez civil rights litigation and does not consent to any settlement ..."

It also provided more detail about Briles' involvement with investigators from the Pepper Hamilton law firm, which Baylor hired last fall to review the school's response to sexual assaults. The letter states Briles met with Pepper Hamilton investigators in February and then with Baylor attorneys in April, shortly after Hernandez filed her lawsuit.