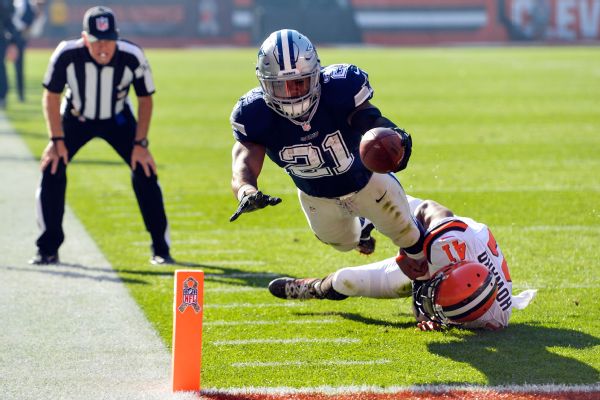 The Dallas Cowboys are not only tied with the New England Patriots for the best record in the NFL -- they also have the league's best-selling jersey.

Rookie running backEzekiel Elliott's jerseyis No. 1 in sales from April 1 to Oct. 31, according to league officials.

Prescott moved into the top five after having a strong October, selling more jerseys than any other player in the league except Elliott.

Cowboys jerseys have been so popular that through the first six weeks, the team had already eclipsed its jersey sales from the entire 2015 season, team spokesman Rich Dalrymple told ESPN last month.

Over the past seven months, the Cowboys have had four players among the top 15 in jersey sales: Elliott, Prescott, Dez Bryant (No. 11) and Jason Witten (No. 14). Bryant and Witten finished last season at No. 9 and No. 10 on the list, respectively.

The Cowboys make more money per jersey than any other team in the league. They are the only team that distributes its own gear, and therefore, outside of sales on the official NFL online store, the team gets paid a wholesaler fee that it does not have to split with the rest of the league.

San Francisco 49ers quarterback Colin Kaepernick, who gained relevancy on the sideline through his decision not to stand during the national anthem, had the league's best-selling jersey for a couple of weeks.

Kaepernick, who is now starting, was not in the top 15 in sales in October and finished 15th on the April-October sales list.

Despite declining TV ratings, NFL merchandise sold by Fanatics, which runs the official NFL Shop, is up 20 percent year to date (Jan. 1 through Oct. 31) versus last year, and October sales were up 22 percent over October 2015.

Elliott gashes Browns with a pair of rushing TDs
Ezekiel Elliott continues his torrid rookie season by adding a pair of touchdowns against the Browns to help the Cowboys roll in Cleveland.
Related topics:
sportsespnezekiel elliottcarson wentznfljerseydak prescottdallas cowboys
Copyright © 2022 ESPN Internet Ventures. All rights reserved.
TOP STORIES
Daylight shows home destroyed after standoff with shooting suspect
What we know about man accused of shooting 3 HPD officers
Suspect arrested after 30-minute chase ends on I-45 in Texas City
Clouds clearing today, sunny through the weekend with rain next week
5 people charged in connection with Pct. 5 corporal's murder
How many times can I reuse my N95 mask?
Decades after TV anchor disappears, convicted rapist denies connection
Show More
Driver dies after slamming into 18-wheeler's trailer on US-59
Woman shot in the shoulder during robbery set up in SW Houston
Prepare for a major closure at I-69 and 610 West Loop this weekend
Officers escort body of corporal killed in ambush to funeral home
ABC13 obtains HPD scanner traffic of chase that led to shootout
More TOP STORIES News