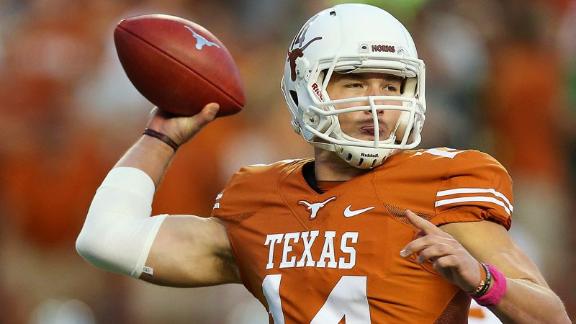 AUSTIN, Texas -- Longhorns QB David Ash will not play against BYU this weekend after experiencing more concussion-related symptoms, and coach Charlie Strong said he is worried about the quarterback's future.

Ash told Strong and team doctors that he believes the first hit he took against North Texas triggered a recurrence of symptoms after the game. He missed 10 games and received a medical redshirt after suffering a concussion at BYU last season.

Strong said he is worried, but no official determination has been made about how long Ash will be sidelined or if he will play again this season.

Texas sophomore Tyrone Swoopes will make his first career start at quarterback in Ash's place. He passed for 26 yards and rushed for 79 and a touchdown in six games last year. True freshman Jerrod Heard will be his backup.

"Tyrone can handle it," Strong said. "I'm not concerned about that. The team will rally around him."

Ash was hit on the first play of Texas' second offensive drive when he mishandled a snap from center Dominic Espinosa. When he recovered his fumble, Ash was immediately hit by UNT defensive end Jarrian Roberts for a 2-yard loss.

Ash did not report symptoms to team doctors during the game or immediately thereafter. He called the Texas staff late Saturday night after experiencing headaches and dizziness and was brought in for further evaluation.

The fourth-year junior was making his 22nd career start and finished with 190 passing yards. He passed for a touchdown and scored another on a 1-yard run.

Ash returned last season to play the first half against Kansas State on Sept. 21, but he did not appear in another game due to recurring concussion symptoms.

Texas will adjust its offensive plans to accommodate Swoopes, a 6-foot-4, 245-pound dual-threat quarterback, but Strong said he has confidence in the sophomore going into his first start.

"We can function," Strong said. "It's not like it's the end of the world. We know we've got to go play a football game, and that's what we're going to go do."

Strong also announced Monday that Espinosa, a 40-game starter at center, fractured a bone in his right ankle and is out indefinitely.

Espinosa, a fifth-year lineman, went down in the third quarter Saturday and had to be carted to the locker room.

He has started every game for Texas since the start of the 2011 season and was by far the Longhorns' most experienced lineman. Texas' four other starting linemen Saturday have a combined 14 career starts. If Espinosa misses the season, he could apply for a sixth season of eligibility.