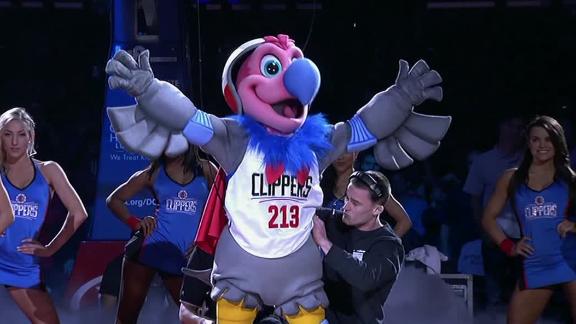 LOS ANGELES -- The Clippers have unveiled a new mascot: Chuck the California Condor.

The bird made its entry at halftime of Monday night's 105-95 win over the Brooklyn Nets. It was lowered from the rafters at Staples Center with the arena lights off.

Chuck is gray with a pink head and a large blue nose. He wears a Clippers cape and has a red-and-white helmet that he removes.

"It's like us. It used to be extinct, and now it's coming back," coach Doc Rivers said.

Team owner Steve Ballmer personally introduced the bird, which danced, did flips and dunked with the help of a trampoline.

The crowd was underwhelmed in its response until Ballmer announced that fans would receive a free pair of red Converse sneakers if the owner could successfully dunk. Ballmer did so using the trampoline, and the crowd roared.

Chuck later tweeted that he enjoyed his debut:

The Clippers were one of four NBA teams without a mascot. Years ago, they had one named Sam Dunk when the franchise was located in San Diego.

Chris Paul and Jamal Crawford were supportive of the mascot, believing it will get kids more involved.

"I know my son will love it," Crawford said. "I hope my daughter's not scared."

Most of the Clippers didn't see Ballmer's dunk because they were in the locker room at halftime.

"I was worried about him," Rivers said. "I know he was working on it. He's a brilliant guy, and when he told me he was doing it, I had to question it."

"I want to see how many other owners could do that," he said. "Put them out there on All-Star Saturday night."