Chris Paul on come-from-behind win over Nets: 'Enough is enough' 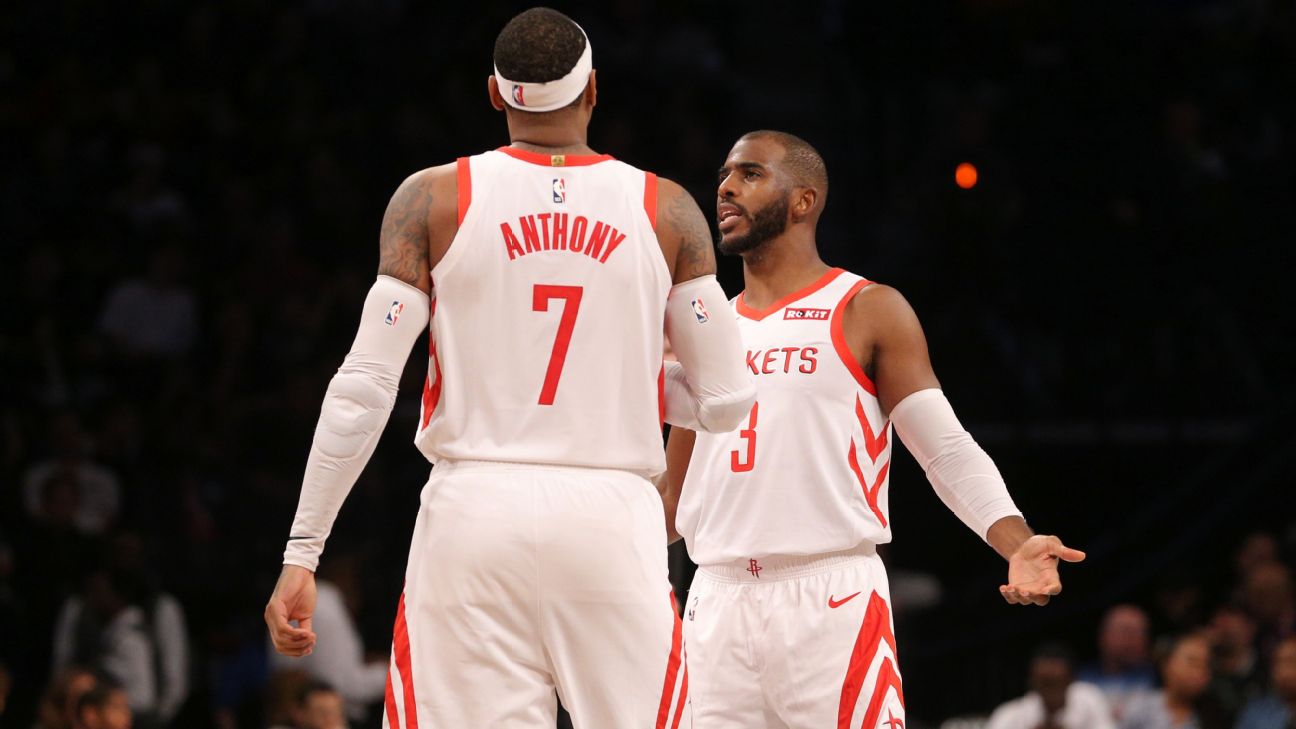 NEW YORK -- With his team trailing the Brooklyn Nets by 14 in the second quarter, Chris Paul asked the Houston Rockets'coaches to leave a timeout huddle so the players could talk among themselves.

"We've been playing a lot of games now, and the coaches try to do schemes," Paul said. "We just said, 'Y'all stay out a second. Let us talk.' I mean, at some point enough is enough. We talked about it as a team. 'What are we going to do?' They were just scoring every time down."

The message seemed to resonate. The Rockets held the Nets to 36 percent shooting the rest of the way in a 119-111 win Friday night.

Houston (2-5) snapped a four-game losing streak. Paul led the Rockets with 32 points and 11 assists, and Carmelo Anthony added 28 off the bench, hitting nine of his 12 attempts.

Anthony said the players-only timeout served as a turning point for Houston.

"We was talking. We was yelling, cursing," he said. "It was something that we had to figure out, and we did that."

Added Paul: "[Coaches] can tell us all the schemes they want to. It's up to us to figure out how we're going to get a stop."

Late last week, coach Mike D'Antoni considered making major changes to the Rockets' approach on defense, but he later changed his mind. He said Houston made some minor tweaks to the defensive scheme during Thursday's practice and that the team employed "a little bit of a hybrid" of the switch-heavy defense it played last season.

"But I really think it starts from wanting to do it," D'Antoni said. "We didn't have a desperation before, and [Friday night] we did. [Saturday] night we've got to do it again."

The Rockets expect James Harden to return from a hamstring injury on Saturday against the Chicago Bulls. Harden has missed three games since being diagnosed with a Grade 1 hamstring strain.

Paul pointed out that he and Harden had played only two games together this season. Paul was suspended for two games following an altercation with Los Angeles Lakers guard Rajon Rondo.

"We're going to figure it out," Paul said.

D'Antoni credited Paul with helping the Rockets avoid what would have been a demoralizing loss.

"That's who Chris Paul is," D'Antoni said. "When times are tough -- and he knew times were tough -- he had to find even more within himself, and he did. That's why he's one of the best. He just has an unbelievable spirit that won't let you lose."