Cavs get Frye from Magic, Blazers put Varejao on waivers 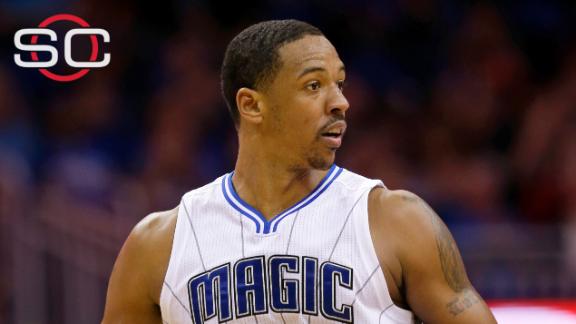 INDEPENDENCE, Ohio -- The Cleveland Cavaliers acquired Channing Fryefrom the Orlando Magic in a three-team trade Thursday, adding a shooter the Cavs had been coveting leading up to the trade deadline and saving more than $10 million in payroll and taxes this season.

In order to receive Frye, the Cavs sent center Anderson Varejao and a conditional first-round pick to the Portland Trail Blazers. The 2018 pick is top-10 protected for two years. Cleveland also parted ways with backup guard Jared Cunningham in the deal, sending him to Orlando along with a second-round pick from Portland.

The Blazers will use the stretch provision to pay the remainder of Varejao's salary over five years. Portland took on Varejao's deal in part to reach the mandated salary-cap floor.

"Anderson is a special player, teammate and person," Cavaliers general manager David Griffin said in a statement. "Few players have earned the respect, support and admiration of an entire organization, fan base and community as Andy did here. Those are all things that made this a difficult deal to do. At the same time, we have a deep obligation to do whatever we can to reach our ultimate goal, and we believe this was a deal that improves our team now and positions us better in the future as well. We thank Andy for his hard work, dedication and contributions to the Cavaliers and our community and wish him and his wife, Marcelle, the very, very best."

Griffin later said of Varejao, "There's very little that I've enjoyed less in my professional career than letting him know that he was traded."

LeBron James, who was teammates with Varejao for eight seasons, called it "the worst part of the business right there."

"When you lose a brother, lose a teammate, that's the worst part about it," James said after the Cavs' 106-95 victory over the Chicago Bulls on Thursday night.

Griffin has a history with Frye. He was a member of the Phoenix Suns' front office when Frye was a key member of the Suns' 2009-10 team that reached the Western Conference finals. Griffin said Frye was all but set to join the Cavs as a free agent in the summer of 2014 before pivoting to sign with Orlando after James announced he was coming back to Cleveland, changing the team's salary-cap plans.

While Griffin's opinion of Frye was already strong, he said he canvassed the Cavs' locker room for their input on Frye before making the deal.

"We're excited to have Channing come here for sure," James said, according to Cleveland.com. "I think he can add something to our team, a veteran, a guy who's played some really good ball in his career, so we're excited about that."

With the deal, the Cavaliers created a new trade exception of $9.6 million.

At 6-foot-11, Frye is a stretch forward who is averaging 5.2 points and 3.2 rebounds in his second season in Orlando. His best seasons came with Phoenix, where he averaged 11.4 points and 5.7 rebounds in four seasons. He is a career 38.7 percent shooter from 3-point range.

"Channing Frye is someone we know well. His length, floor spacing ability and locker room presence will impact us positively," Griffin said. "He is a great fit with our group, both on the court and off, and we look forward to Channing, his wife Lauren, and their children, Hendrix and Margaux joining us here in Cleveland."

Frye, a 10-year veteran, was averaging 17.1 minutes for the Magic this season. Regarding whose minutes Frye could assume in the rotation, Cavs coach Tyronn Lue said, "I really don't have a vision yet," but touted Frye as an "underrated post defender." Lue also said he believes that Frye will fit in the Cavs' offense.

"Being a stretch 4, also being bigger, being 7 feet, he can help you out because now you can play small ball with having a 7-footer on the floor," Lue said.

Trading for Frye might have been the Cavs' only move of the day, but Griffin said it could set up an additional transaction for Cleveland.

"It also opened up a roster spot that we may be able to use as we continue through the buyout season, so that was also meaningful to us," Griffin said. "This had value for us in many ways, and there were many layers to what we did."

The Trail Blazers also added Brian Roberts and a 2021 second-round pick in a separate deal with the Miami Heat on Thursday.

Information from ESPN's Marc Stein, Ramona Shelburne and Chris Broussard and The Associated Press was used in this report.