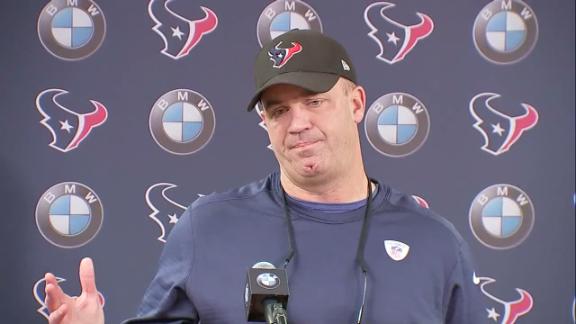 HOUSTON -- Texanscoach Bill O'Brien reiterated Monday that he did not really see the hit quarterbackTom Savage took when it happened but said if he had seen the video -- he cannot see it on the sideline -- he "would have never let [him] back in the game."

Savage took a hard hit from defensive end Elvis Dumervil in the Texans' loss to the San Francisco 49ers on Sunday. While he was lying on the ground, his hands appeared to be shaking involuntarily, but he was allowed back in the game for one series after being evaluated for a concussion. O'Brien said after the first "quick check," he told team trainer Geoff Kaplan he thought Savage needed to be evaluated again.

"It wasn't anything that I particularly saw on the field, I just said, look, that was a quick check," O'Brien said Monday morning. "It was a three-and-out on that series. Let's continue to check him to make sure that the player, Tom Savage, is OK. They went, they checked him, they came to me, they were not satisfied with his answers to the questions that they were asking him, and they pulled him from the game."

On Monday, George Atallah, the assistant executive director of external affairs at the NFLPA, tweeted, "we are initiating a full review of the Tom Savage concussion from yesterday's game."

"Together we will conduct a thorough review of the incident, focused on whether the protocol was properly followed," he said. "But we're also continuing looking at the protocol to look for ways to improve and strengthen it."

Lockhart wouldn't speculate whether any officials saw the video before clearing Savage to return. He said that spotters do have the ability to send video to "relevant personnel on the field," but he said a review will show who saw what.

O'Brien was criticized after his postgame news conference for deflecting blame for the fact Savage stayed in the game. On Monday, he defended his comments, saying he's "not passing the buck" for what occurred.

"At no point in time in my coaching career [has] there anything more important to me than the safety of our players," O'Brien said. "I love our players, and I care about them. And I cannot stand when players get injured.

"Anybody that's been on the sideline of a football game knows that from a coaching standpoint, you really can't see things like that, especially when the ball is in certain areas of the field."

Savage is still in the concussion protocol, and O'Brien said he expects T.J. Yates to start at quarterback on Sunday against the Jacksonville Jaguars. Yates was 14-of-26 for 175 yards and two touchdowns in relief of Savage on Sunday.

O'Brien 'would have never' let Savage back into game if he saw video
Texans head coach Bill O'Brien says that due to lack of video on the sideline he was unaware of the seriousness of QB Tom Savage's injury.

Savage returns to game after massive hit on sack
Tom Savage appears to be shaken up after taking a hard hit in the end zone. Savage goes through concussion protocol and returns for a series, but is later replaced by T.J. Yates.