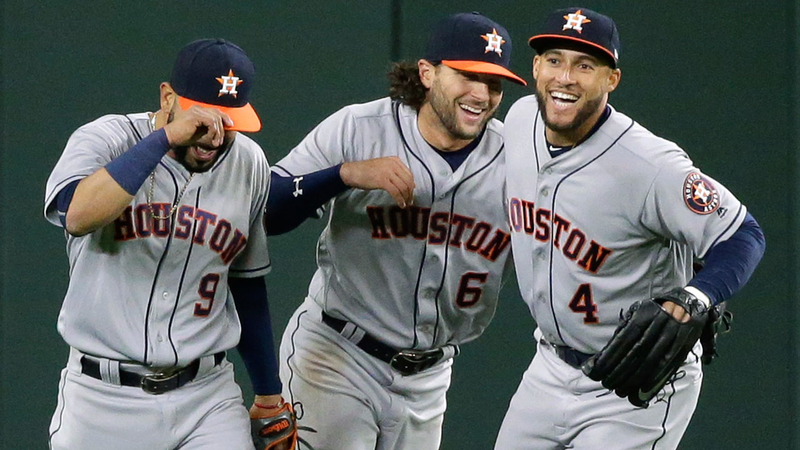 TORONTO, Canada (KTRK) -- Houston is heating up as October approaches.

Houston improved to 100-57 and was assured of first place hours later when second-place Oakland (95-63) lost at Seattle. The Astros will open the Division Series at home against Cleveland on Oct. 5.

Individual tickets for the Astros ALDS home games will go on sale Friday at 9 a.m. Fans can buy tickets by phone at 1-877-9ASTROS and online at Astros.com/postseason. You will not be able to buy them at the Minute Maid Park Box Office.

Astros manager A.J. Hinch, said he would not stay up to watch the outcome of the Athletics game.

"I'm going to go to bed," he said. "Do you hear my voice? I'll wake up in the middle of the night and figure it out."

The Astros need three wins in their final five games to break the franchise record for victories in a season, set in 1998.

"I'm proud of this team, and they're not done yet," Hinch said. "To be at 100 and climbing is remarkable for this team, and we should be very proud."

"We really haven't played our best baseball until lately," Bregman said. "That's a good sign heading into the postseason. I think we're in a good spot right now."

Roberto Osuna needed just six pitches in the ninth for his 20th save in 21 chances. Earlier Tuesday, assault charges against Osuna were dropped because the complainant, who lives in Mexico, made clear she would not travel to Toronto to testify. Osuna agreed to stay away from the alleged victim for one year and continue counseling.

Traded from Toronto to Houston in July, Osuna was booed by Blue Jays fans for the second straight game, starting with when he entered and then in between pitches. Speaking through a translator, Osuna said he was untroubled by the negative reaction.

"When I came into the game, I was focused on what I had to do, so it didn't affect me," he said.

"It was probably the least efficient outing of his young career," Hinch said. "He had to battle through some delivery issues."

Just days after clinching a playoff spot, tickets appeared on StubHub for the postseason.

Bregman went 2 for 5 and extended his club-record streak of reaching base safely on the road to 53 games, then longest since 59 in a row by the New York Yankees' Derek Jeter in 2006 and 2007.

Bregman hit his 31st homer, a two-run drive in the first off Sam Gaviglio. Billy McKinney's sixth homer cut the gap in half in the third, but Houston widened its lead in the sixth when Tyler White chased Gaviglio with an RBI single and pinch-hitter Evan Gattis had a sacrifice fly off Danny Barnes.

"It's been a good experience, a lot of learning," he said. "I wish I could have been a little more consistent."

Astros RHP Ryan Pressly struck out Toronto's Justin Smoak on three pitches to leave the bases loaded in the seventh. Pressly has not allowed a run in his past 20 games.

"I love Pressly against anybody in the league right now," Hinch said. "He has effective breaking balls and he's got 96-97 if he needs it."

Blue Jays: RHP Aaron Sanchez had season-ending surgery Tuesday on his troublesome right index finger and is expected to be ready for spring training. The surgery was performed in Los Angeles by Dr. Steven Shin. The Blue Jays did not disclose the specifics of the surgery or say what it was intended to repair. Sanchez went 4-6 with a 4.89 ERA in 20 starts, including a 1-1 record and 6.04 ERA in five starts after returning from a 54-game absence. Sanchez was hurt hours before a June 21 start at the Los Angeles Angels when his finger got caught in a suitcase. ... INF Lourdes Gurriel Jr. (strained left hamstring) will miss the rest of the season. Gurriel was injured running out a ground ball in the first inning Monday.