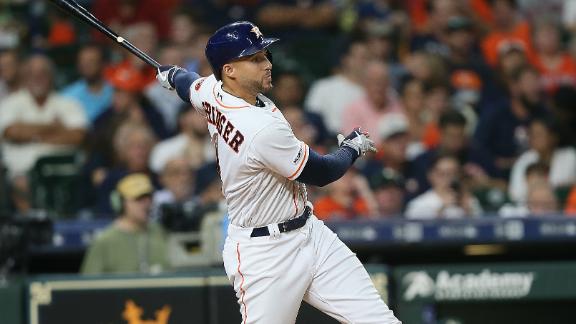 "What we are seeing from [Luzardo] and Murph and what we feel like is going to be a bright future is coming along pretty quickly here," Oakland manager Bob Melvin said.

Oakland won for the fourth time in five games. The A's closed within a half-game of Tampa Bay for the top American League wild card and stand a half-game ahead of Cleveland for the second spot.

Houston fell a half-game back of the New York Yankees for the best record in the majors. New York's scheduled game with Detroit was postponed.

Luzardo, the first Peruvian-born pitcher in major league history, was promoted from Triple-A Las Vegas on Monday. He allowed one hit in three innings -- a solo homer to Martin Maldonado -- and struck out two.

"It's a tough spot to put him in," Melvin said. "He knew today he was coming in in the sixth and wasn't sure how long he'd pitch, but our plan was to try to get him through the eighth. He gives up a solo home run and other than that, gives up swings and misses, bad swings, used all his pitches, throws 97 [mph]. Didn't look like he was afraid of the moment. It was pretty cool."

The hard-throwing left-hander retired nine of the 10 batters he faced, including his final seven, a promising sign that the starting pitching prospect could make an October impact as a reliever.

"Once I went back out for the second, I got into a groove, and all my pitches were working," Luzardo said. "I was happy that I was able to get all three of them over the plate."

Astros starter Jose Urquidy struck out 10 and pitched one-hit, one-run ball over five innings before the A's got to the bullpen.

"I felt really good with all my pitches," Urquidy said. "I think I was good with my breaking balls and my fastballs, too, and that's what worked for me."

Semien hit his career-high 28th home run leading off the fourth, and Murphy homered leading off a four-run sixth inning before Matt Olson hit a two-run double, all off Josh James (5-1). Khris Davis capped the sixth with an RBI single to up the lead to 5-2.

"I was just looking for something over the plate," Murphy said. "I saw his slider on the first pitch, so I kind of had a read on it. I was just wanting him to throw it more toward the middle for me. He did. I was able to get the barrel on it."

James said he got out of his delivery and got a bit long, and by the time he realized it, it was too late.

"The inning unraveled with the two-strike homer to Murphy on a breaking ball that wasn't really executed," Hinch said. "I think if he throws a good one, he's got a chance. He's punched out a lot of guys since he's come off the injured list but tonight that inning got away from us a little bit."

Aledmys Diaz gave Houston a 2-1 lead in the fourth with an RBI double, but after loading the bases, Oakland starter Brett Anderson got out of further trouble by inducing an inning-ending double play from Myles Straw.

Astros star George Springer matched a career high with his 34th home run, a solo shot in the third.

Liam Hendriks pitched the ninth for his 20th save.

Athletics: OF Ramon Laureano returned to the lineup after missing the previous three games with cramps in his right leg. He went 0-for-3 with a walk and made a nice throw from right field to get Jose Altuve at the plate in the fifth.

Astros: 1B Yuli Gurriel, who left Friday's game with a sore left hamstring, could return to the lineup as soon as Friday, Hinch said.

"It's really impressive. The command, the poise for how young he is. The overall stuff is phenomenal. Anytime you can have a lefty throw 98 [mph] and throw strikes, it's always a plus," Anderson said of Luzardo.

Athletics: RHP Homer Bailey (12-8, 4.87 ERA) starts the finale of the four-game series on Thursday looking to continue his recent success after going 3-0 with a 2.35 ERA over his past five starts.