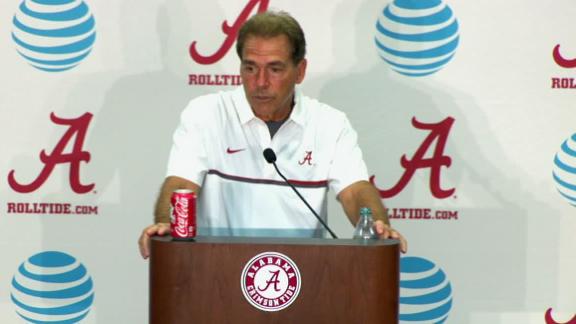 TUSCALOOSA, Ala. -- There's nothing passive-aggressive about the relationship between Alabama coach Nick Saban and offensive coordinator Lane Kiffin.

When Saban isn't happy, Kiffin knows it. And sometimes, such as during Bama's 38-10 win against Western Kentucky on Saturday, the whole world gets to see his displeasure.

Up 28 points with less than a minute left in the game, Saban snatched off his own headset and ripped into Kiffin, screaming while walking alongside him on the field. At one point it looked as if Saban might throw his headset toward Kiffin, who didn't raise his voice or respond in an inflammatory way. Kiffin simply put his hands on his hips and listened.

When Saban was asked after the game what the "argument" was about, he disputed the way the question was worded.

"There are no arguments," he said. "Those are called ass-chewings."

Saban did not specifically say what the "chewing" was about.

Although the Crimson Tide beat Western Kentucky handily, Saban wasn't pleased with his team's performance, calling it the most "disappointed" he's ever been after winning a game.

Alabama had an uncharacteristic 12 penalties, rushed for fewer than 3.3 yards per carry and had a late fumble that set up Western Kentucky's only touchdown of the game.

Saban could be seen getting on to Kiffin as early as the first quarter, when a drive stalled out and Alabama was forced to settle for a field goal inside the red zone.

"We have lots of work to do," Saban said. "We're going to play a lot better teams. I didn't think we practiced very well this week. I didn't think we prepared very well for this game. I don't think we respected the team we played. Like I said before, when you're arrogant, it makes you complacent. It creates a blatant disregard for doing things right. If we don't start doing things right, we're not going to have the kind of success that we're capable of."

Ever since Kiffin was hired as offensive coordinator in 2014, scenes like the one on Saturday have occurred at times. Saban and Kiffin will disagree, sometimes there's a brief back and forth, and then it's over.

Kiffin, who came to Alabama after being fired as coach at USC in 2013, doesn't speak to the media during the season, per the school's policy. He received a raise on Friday, seeing his salary improve from $714,000 last season to $1.4 million for this season.

Large leads don't stop Saban from laying into Kiffin
Nick Saban yells at Lane Kiffin after Alabama surrenders a touchdown in the final minute of the game that is out of reach for Western Kentucky. 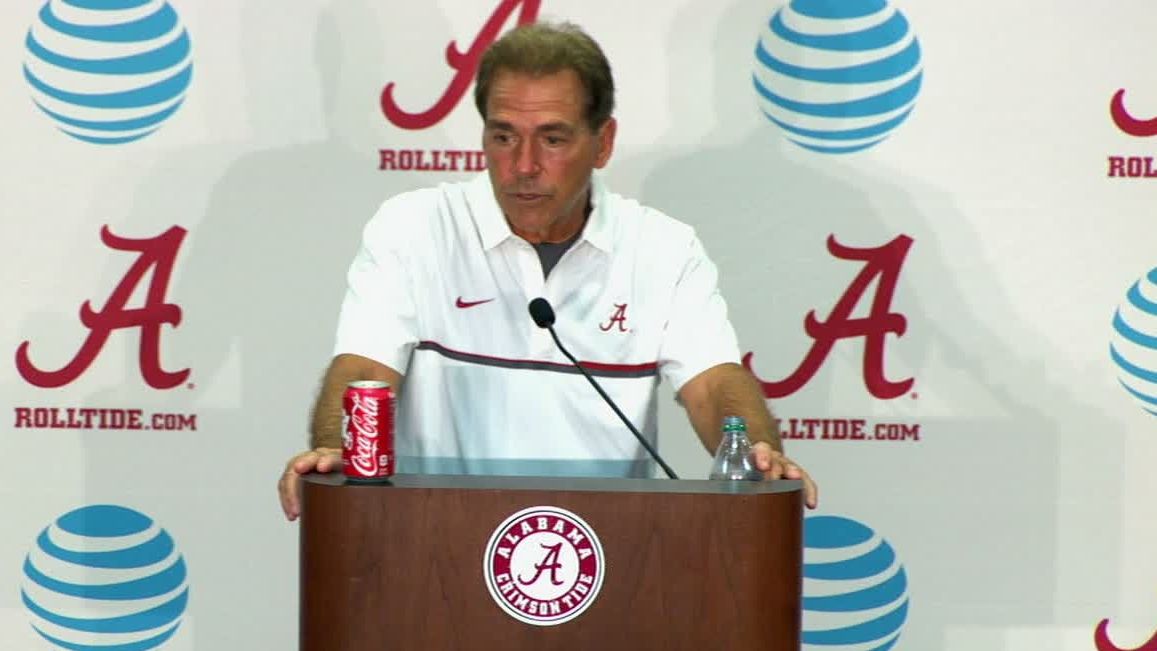 Saban rips team after win
After a 38-10 victory over Western Kentucky, Alabama coach Nick Saban tells reporters he's never been more disappointed in his team following a win in his career.
Related topics:
sportsespnlane kiffinargumentcollege footballwestern kentucky hilltoppersalabama crimson tidenick sabanass chewing
Copyright © 2021 ESPN Internet Ventures. All rights reserved.
TOP STORIES
Boston-bound jet crashes on takeoff west of Houston with 21 on board
Houston executive 1 of 21 on board jet when it crashed in field
How residents in this Harris County neighborhood became numb to crime
Loved ones remember mom of 3 killed during home invasion
Big warm up ahead but another cool front in the forecast
Alvin Community College offers way to tap into oil and gas
Friendswood gas fire put out after more than 5 hours since eruption
Show More
Aviation weighs in on what might have gone wrong in plane crash
Jan. 6 panel votes to hold Steve Bannon in contempt
Astros vs. Red Sox: Houston ties the series after 9-2 win over Boston
Unsolved: A Life Never Lived
Alvin Community College gives inmates way to earn a second chance
More TOP STORIES News