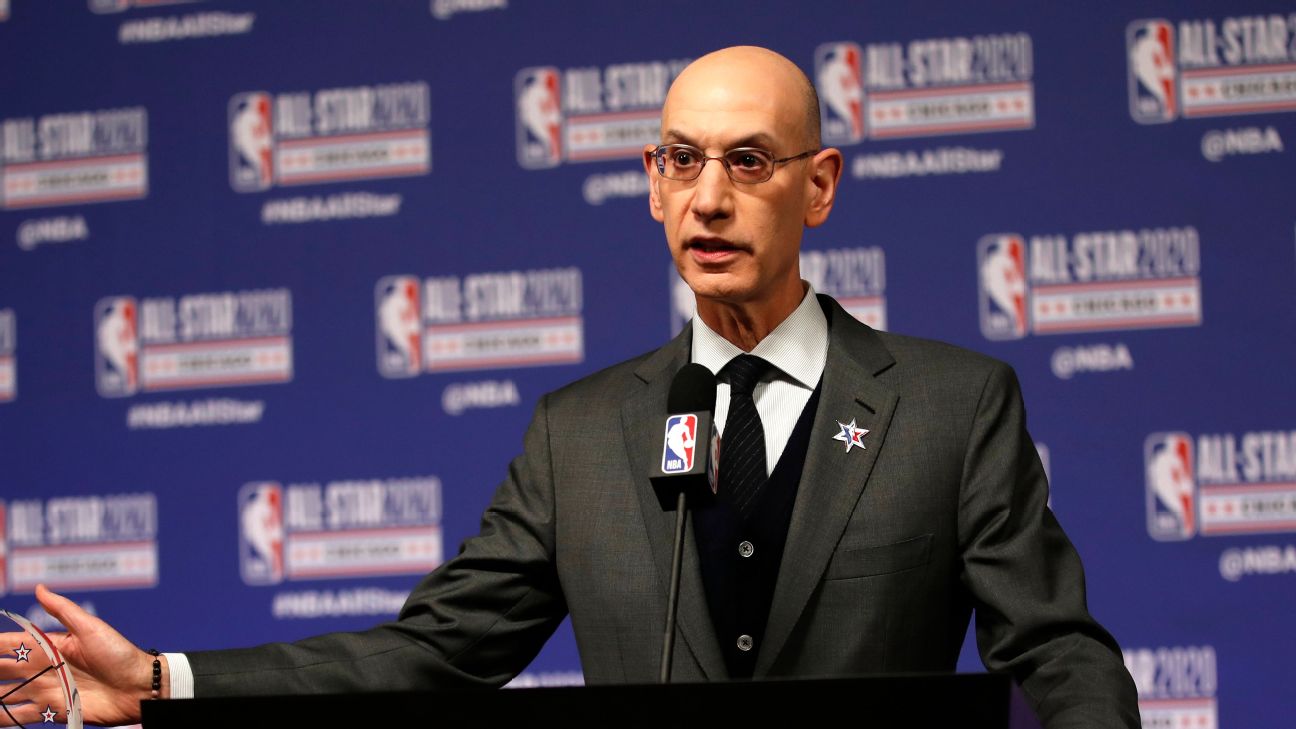 NBA commissioner Adam Silver said there is a chance that older NBA head coaches won't be able to be on the bench when the league resumes play on July 31 at the Walt Disney World Resort.

"I think one of the things we know, we've learned a lot about the virus since we shut down in March, and the data is demonstrating that for the most part, and there are exceptions, that [it is] healthy young people that are the least vulnerable," Silver said while speaking on TNT's "Inside The NBA" Thursday night. "But there are also people involved in this league, particularly some of the coaches, who are obviously older people and we also know people at any age who have underlying conditions are most vulnerable.


"So we are going to have to work through protocols that maybe, for example, certain coaches may not be able to be the bench coach. They may have to retain social distancing protocols. And maybe they can be in the front of a room, a locker room or a ballroom with a whiteboard, but when it comes to actual play we're not going to want them that close to players in order to protect them. So those are all issues that we are continuing to work through."

Silver's comments received instant pushback from coaches, including New Orleans Pelicanscoach Alvin Gentry, who is 65. Gentry told ESPN's Ramona Shelburne, "That doesn't make sense. How can I coach that way?"

Gentry said he doesn't think older coaches should be singled out.

"Is everybody under 60 in great health?" he asked.

In a statement Thursday night, Dallas Maverickscoach Rick Carlisle, president of the NBA Coaches Association, said he spoke with Silver, who admitted he might have jumped the gun with his comments.

"The health and safety of our coaches is first and foremost. It's entirely possible that an NBA coach in his 60s or 70s could be healthier than someone in their 30s or 40s," Carlisle said. "The conversation should never be solely about a person's age. Adam assured me that we would work through this together to help determine what is both safe and fair for all of our coaches."

"Unless we're going to line all the coaches up and give them physicals to determine all the underlying conditions, how are we going to determine who is at a high risk?" Gentry asked before Carlisle issued his statement. "At the end of the day, they're the league. They're going to make the choice.


"I think it's unfair if that's what they're doing. To base something strictly on age when there's nothing out there that says I'm more susceptible to catching it than anybody else. I understand the risk that I'm taking if I do get it. But hell, I want to be with my team and do my job. That's what they hired me for."

Earlier Thursday, Silver and the NBA's board of governors passed the league's proposed plan to return to play in Orlando, Florida. The plan will include 22 teams -- all of which will play eight "seeding games" -- before the league proceeds to a typical 16-team playoff with four rounds of best-of-seven series. There also is the possibility for a play-in tournament if the ninth seed in either conference is within four games of eighth place when those games have been completed.

There were multiple possibilities considered by the league for how it would ultimately return to play. But Silver said the choice he made was guided by the advice of Michael Jordan.

"Once the playoffs start, and this was a point made by Michael Jordan, whose team is not one of the 22 teams [that will play in Orlando], but he is clearly the most respected voice in the room when it comes to basketball. He felt it was very important that after we established the 16 teams, we not get gimmicky. Because there were a lot of proposals on the table to do unique tournaments and do pool play like you see in international competition. And we took many of those proposals very seriously.

"But, ultimately, I agreed with Michael. There's so much chaos in the world right now, even before the racial unrest we are experiencing right now, that let's come as close to normal as we can. And that is top eight in the West, top eight in the East, playing four rounds of seven games. So that is what we intend to do, and our goal is to crown the champion."

Silver said there is much be figured out, and there is more to learn about the virus and how to treat it. Still, he left open the possibility that at some point during the NBA's return to play, which is scheduled to run from July 31 until no later than Oct. 12, that fans could be in attendance.

"We have had extensive discussions with the players' association, but we haven't finished those negotiations, and they are obviously our partners here so we have to agree to every aspect of this format," Silver said. "Those discussions are ongoing. We have issues to work out with Disney as far as playing in Orlando, but even when all those steps are completed there are constant changes in terms of what we are learning about this virus.

"We're studying every day the caseload in Orange County in Florida, whether or not antivirals or vaccines come earlier than expected could impact whether fans come in or not. So obviously, the most significant changes from when we shut down is we are playing without fans, we're playing at a central location, we're going to play on a campus where in essence the players are going to live and remain there throughout the competition."


Silver's appearance on "Inside" came as part of a discussion on race relations in America in the wake of the death of George Floyd, who was in police custody in Minneapolis when a white officer knelt on his neck for nearly nine minutes.

"You can't walk in another man's shoes," Silver said. "You've all made the point about listening, and I think this is a wake-up call for the country. We have, for example, a community conversation at the NBA [Wednesday] with almost a thousand people, and many of my colleagues, African American colleagues, were telling stories, people I work with every day, people I thought I knew what was going on in their lives, and people telling stories about having guns pulled on them when they were innocently going about doing their business. Or the way they feel they were discriminated against in certain situations.

"I think you guys hit the core of it. There are, no doubt, law-enforcement issues, but ultimately this is about race, and race in America. And I think what also has struck me is we are such a unique institution, one that all of you of course are a part of that I think ultimately may be in more of a position to have an impact on this issue than almost any other organization in the world. When you think about, among the players, coaches, former players like you guys, including our ownership within that group, you have some of the most well-known people of color in the entire world.

"I've had this conversation with Michele Roberts just today, who runs our players' association, who is also African American, and saying let's collectively put our heads together. Michele was the first to say, 'This can't be more of the same. This isn't about another joint statement from the league and its players. This is a moment in time.' And part of my hesitation has been I don't have any answers. As [Shaquille O'Neal] said, and all of you said, this is about listening in this moment. So I don't think it's about coming up with something tomorrow, but fairly quickly I think we need to come together and think about ways that this institution can have an impact on greater society."

Silver said that although Thursday's board of governors meeting was set up to pass the league's return-to-play proposal, the owners spent the first hour discussing what has taken place over the past couple of weeks, and how the league can help make changes in society.

"I've been incredibly proud of our organization," Silver said. "We use that expression 'the NBA family,' but I mean it broadly just listening to you guys over the last half hour. Whether it's retired players like Stephen Jackson or current players who are speaking out on these issues. Of course, I was listening to the back-and-forth just now, and I think on these issues it is never going to be the case that we all are going to agree. But I also think one of the values of the NBA has always been tolerance, and I also think we have to think we have to be willing to listen to each other and know we aren't always going to agree on what the issues are and occasionally people are going to unintentionally say something that has different meanings to different people, and that's what we're all learning right now, as well." 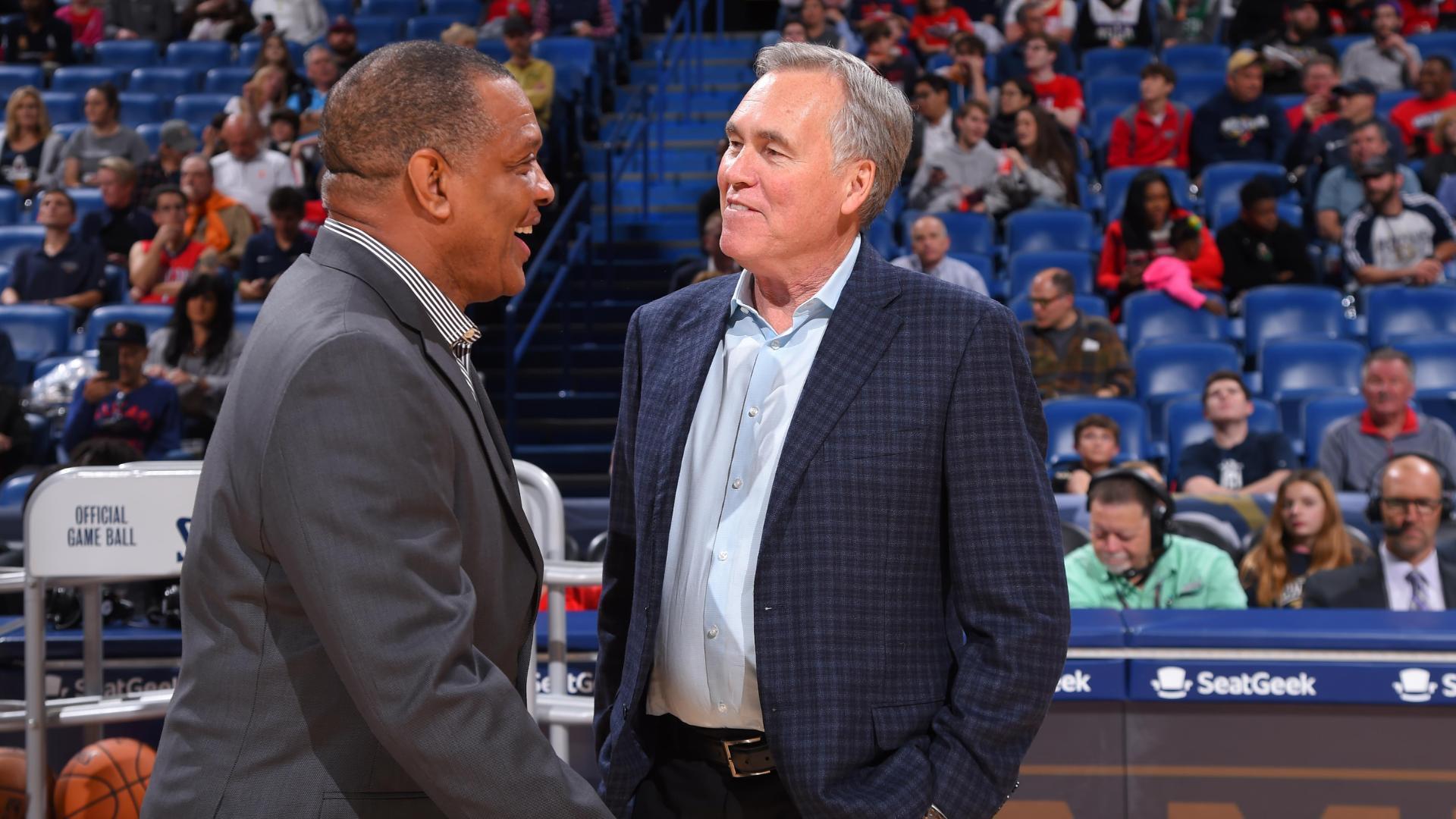