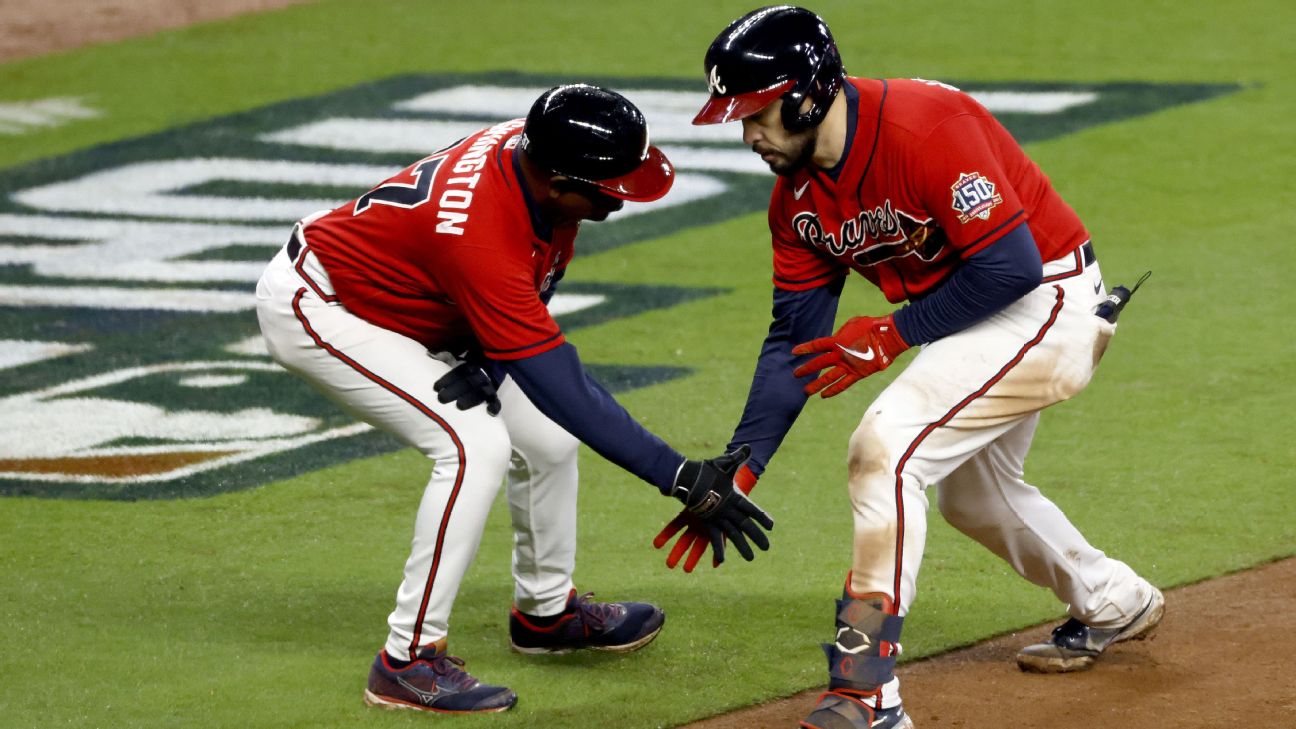 Regardless of the final result of the 2021 World Series, these Atlanta Braves are quite the special story. They're the embodiment of why playoff baseball is special and how having the best roster on paper doesn't guarantee a championship in the Fall Classic. Imagine telling yourself at the beginning of October, let alone when Ronald Acuña Jr. went down with a season-ending ACL injury in July, that the Braves would be two wins away from winning the World Series and have a series lead over a team as talented as the Houston Astros.

Ian Anderson -- working through a tough weather situation -- went five no-hit innings with three walks and four strikeouts in the Braves' win in Game 3 on Friday. The move resembled part of a trend in which teams are taking out starting pitchers before they can face opposing lineups a third time, similar to the tactical move the Tampa Bay Rays made to take out Blake Snell in Game 6 of the World Series last year. Atlanta placed a bet that their bullpen would hold up, and they came through in a big way. Relying on A.J. Minter, Luke Jackson, Tyler Matzek and Will Smith, the Braves' pitching staff finished off a two-hit shutout to take the third game of the series.


In a night that did not feature much offense, Atlanta catcher Travis d'Arnaud came through in a big way, going 2-for-4 with a double and a home run, which tallied the second run of the night and helped clinch the 2-0victory. Atlanta also saw enough offensive production from the top of its lineup, with postseason hero Eddie Rosario scoring the first run of the game on an Austin Riley double, which proved to be all of the offensive production the team would need to take a 2-1 series lead over Houston. It will be interesting to see how Atlanta's bullpen holds up for the rest of the series. The Braves will turn to their bullpen for two straight games, which has become more and more of a common occurrence this postseason. How those innings impact Atlanta's relievers, a group that ranked 13th in baseball in fWAR in the regular season, will play a huge role in determining the results of the series. -- Joon Lee

Read more: Who has the best skills in the World Series

Here's the best plays and moments from Game 3:

The existential crisis about what's best for winning and what's entertaining for fans became front and center when Atlanta decided to take outAnderson, who finished the night with five no-hit innings while walking three batters and striking out four. The only other pitcher in MLB history to go at least five innings in a World Series game and finish without giving up a hit was Don Larsen, who threw a perfect game for the New York Yankees in 1956.

The decision to take Anderson out of the game highlighted the trend in the 2021 postseason of teams depending heavily on their bullpens to get through games, with Atlanta scheduled for two bullpen games coming up. The desire for Anderson to not face the Astros for a third time through, when pitchers typically struggle against a lineup, undeniably played a role in Atlanta's decision to pull its starter, but many in baseball took to social media to discuss the decision.

Luis Garcia mowed through the Atlanta lineup through the first two innings of the game, but the Braves struck back in the third, scoring the first run. The inning started out with an Rosario walk followed by a single by first baseman Freddie Freeman, who hit a line drive single to center field, pushing Rosario to second base. Garcia then struck out Ozzie Albieson a 86.6 mph changeup for the inning's first out, but Atlanta tallied its first run on the board with a double by third baseman Riley, scoring Rosario and pushing Freeman to third base. A walk of Jorge Soler by Garcia loaded the bases, but the Astros got out of the inning with only a run scored after Adam Duvall popped out and Travis d'Arnaud struck out swinging.

Before first pitch, Atlanta honoredlegendary Hall of Famer Hank Aaron with a tribute ahead of Game 3. Aaron's widow, Billye Aaron, stood on the field, received a standing ovation and teared up from the crowd's reaction. Hank Aaron Jr. threw out the first pitch, which was caught by Freeman, the winner of the 2020 Hank Aaron award.Astros manager Dusty Baker, who was on deck when Aaron hit his record-breaking 715th homer in 1974, joined the family on the mound and gave hugs to Hank Jr. and the rest of Aaron's kids, Gaile, Dorinda and Lary.


Rosario wanted to channel his inner Mario in the remaining World Series games.

In a collaboration between Stadium Custom Kicks and Chandler Bats, Rosario used this "Super Rosario'' themed bat in homage to the iconic Nintendo character. While Rosario can use the bat only during batting practice due to MLB rules, the stick features a striking design with nods to the original 1983 game, including Goombas, pipes, bricks and Piranha Plants. The bat handle is adorned with the words "Super Rosario" in the game's font, and the bat also features a cartoon of Rosario dressed as Mario and a Puerto Rican flag. Rosario also received "Super Rosario" custom-painted cleats, which he can wear in games.

The Braves busted out the red jersey Friday night, and Atlanta legend/Superstation god Dale Murphy was here for it.

Atlanta record producer, executive and rapper was also in the spirit.

Fans with a porpoise

Braves by a million if these sea creatures have anything to say about it. 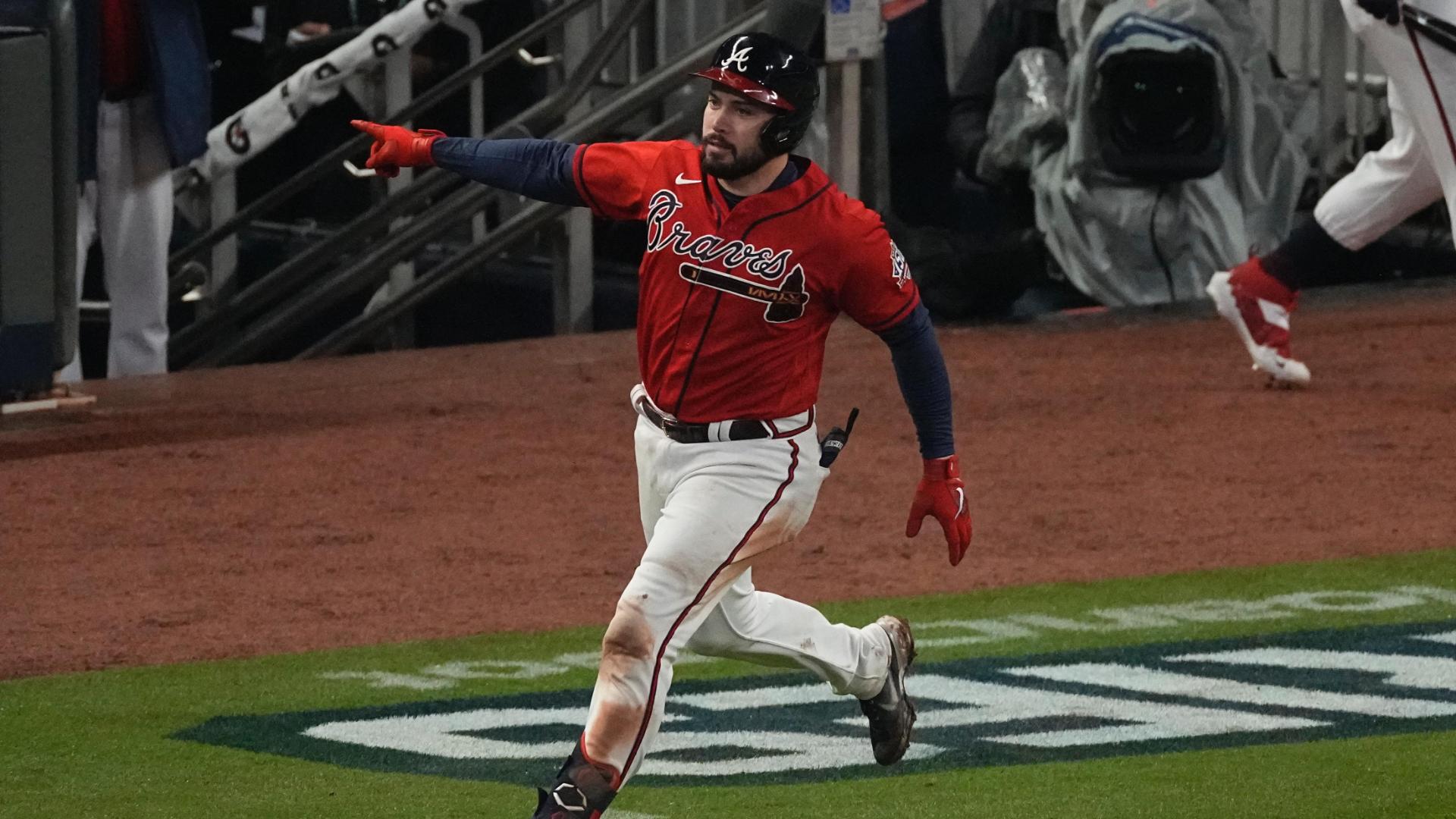