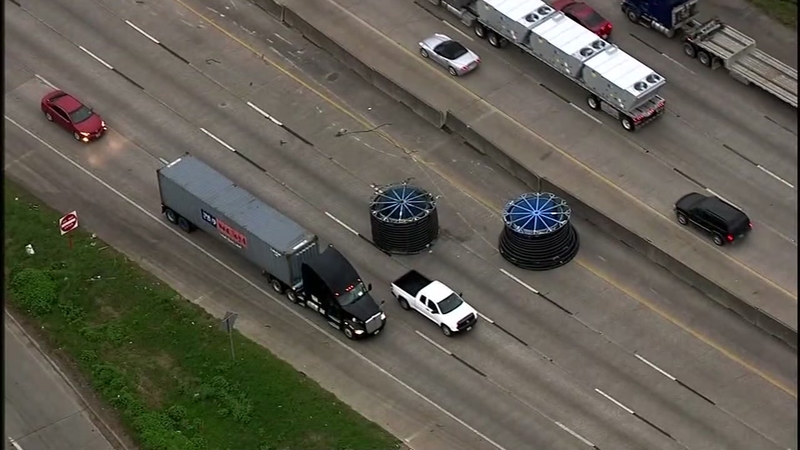 HOUSTON, Texas (KTRK) -- A field trip to the Holocaust Museum was met with one big obstacle in the road.

"We're talking and we look outside and there was a big blue thing rolling down the highway and went from the left side to the right side," said a Mirus Academy student named Sydney.

About 25 students from the Mirus Academy in Katy were with teachers and the principal Friday morning when the driver of an 18-wheeler lost a giant spool.

"When you're taking a group of students, you don't expect a Ferris wheel to come right at you," said Principal Laura Hogan.

The bus was headed down 610 to exit Kirby, when Hogan says she captured cell phone video of the spool going across lanes of traffic.

"The bus driver let out a loud 'yelp' and started to slam on the brakes. I thought we were about to get in a wreck, so I braced myself and looked up about to see a wreck going to happen, but what I saw was a gigantic spool," said Hogan.

It's not the first time this has happened on a Houston freeway recently. On Oct. 25, Houston drivers dodged a giant spool during lunchtime on I-10 near Wayside. On Nov. 12, drivers maneuvered around two spools near the same area of the East Freeway. In this case, Houston police say the driver is cooperating and will likely be cited.

The principal credits their bus driver with his quick reaction in keeping them safe. Students say it was a lesson learned for them to always keep their eyes on the road if they are the ones driving.