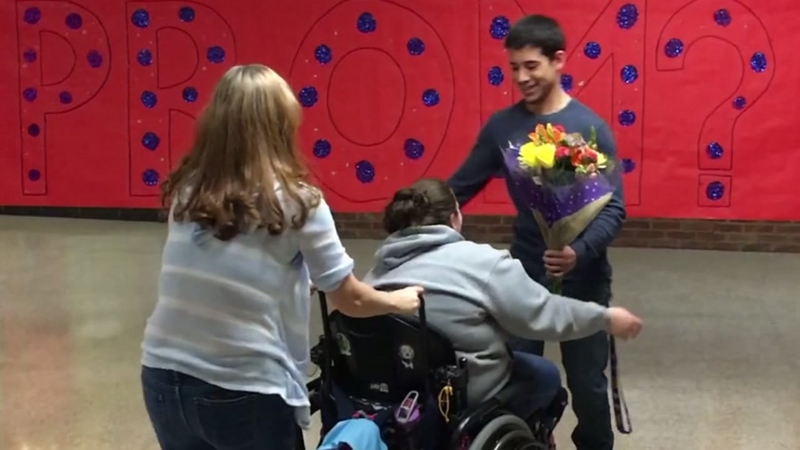 THORNTON, CO (KTRK) -- A Colorado High School junior surprised his friend with special needs with an epic prom proposal topped off with a string quartet on Thursday.

According to KDVR, James Garcia met Alex Hagans while volunteering in her gym class for students with special needs.

"She's definitely a smart, funny girl and makes everyone's day just being around her," Garcia said.

Hagans' friend told Garcia that Alex wanted to ask him to prom. But Garcia told his mom, Marie Martinez, that he had other plans.

"He said she wants to ask me, but I want to beat her to the punch," Martinez said.

"Every day there was a new detail added to it," Martinez said.

On Thursday, he finally popped the question during lunch. He recruited a string quartet to play in the hallway. He waited at the end of the hallway with flowers and a giant sign that said "Prom?"

Hagans said at first she didn't understand why there was such a big crowd and music in the hallway.

"There were lines of people and I didn't know what was going on so I was nervous," Hagans said.

"My leg was shaking through the whole process but once I saw the string quartet start playing and then going through the music, and Alex turns the corner, that's when the nerves settled in so I just waited for her to get closer so I could approach with the flowers," Garcia said.

Hagans' mom, Donna Larson, said she recorded the whole thing on video with tears in her eyes.

"Alex has never had an experience like this before and being a junior in high school. It's what every girl kind of hopes would happen and just seeing the look on her face, it was priceless. And that's a once-in-a-lifetime thing. It's something she is going to remember forever, at least I will," Larson said.

"I was emotional. I got teary-eyed and I was happy that it all fell into place," Martinez said.

"It's definitely going to be something that I remember forever so I'm hoping to make it something she'll remember too," Garcia said.