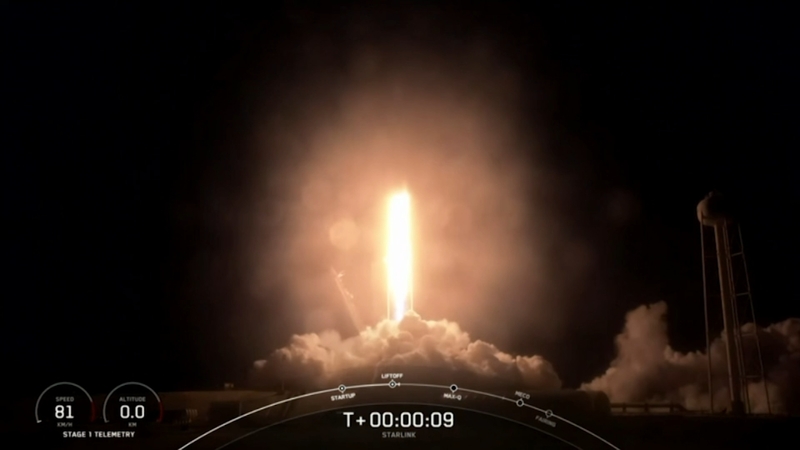 The California-based company flew one of its Falcon 9 rockets for a record ninth time with the mission, which came days after SpaceX's last launch and becomes the company's eighth flight of the year.

This particular flight, Starlink 21, is the 22nd set of internet-beaming satellites that SpaceX has delivered to space, including a set of initial prototypes in 2019.

The company planned for its initial constellation to be 1,440 strong. While SpaceX is well on its way to achieving that milestone, the company has already been granted approval for as many as 30,000 with the option for more at a later time.

The latest stack of 60 satellites will join the fleet already in orbit, bringing the total number launched over 1,300. That number includes prototypes of the satellites that are no longer in service.

SpaceX is quickly filling its initial constellation, as it plans to launch a full commercial rollout later this year. The company recently started taking preorders for Starlink service that could take several months to become active and only allows a limited number of users per area.

In 2019, SpaceX kicked off an extensive beta-testing program, called "better than nothing beta", which kicked off for employees. The initial results proved to be a success, so the company expanded the testing program to residents of the U.S. Now, the service is offered in multiple countries, including the U.K., Germany, Canada and most recently, New Zealand.

When wild fires raged across the Pacific Northwest, SpaceX provided its Starlink to service to Washington state's emergency management division to help first responders aid in battling the wildfires. It also provided terminals to the Hoh tribe, a reservation in western Washington. Tribal leaders said that members were struggling to get connected and that the service has helped with education and provided access to telehealth.

SpaceX has also connected the Pikangikum tribe in Canada as well as residents in Wise County, Virginia. These users are exactly the type of people the service was designed for -- those in rural or remote areas with little-to-no access to connectivity.

Wednesday's launch of Space X was near perfect, until its landing. Watch the video above to watch the moment it launched and the perfect landing!