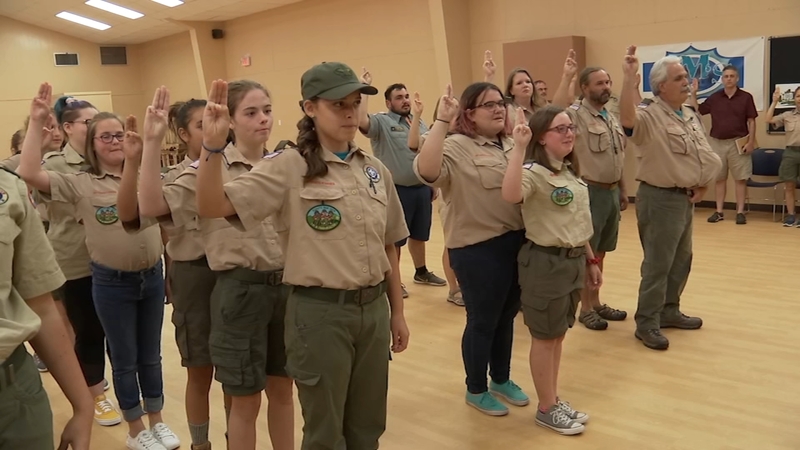 PEARLAND, TX (KTRK) -- A group of girls in Pearland are blazing new trails as the members of Scouts BSA Troop 4640. They started their all-girl troop back in February, shortly after the Boy Scouts program changed its name to Scouts BSA and began admitting female members.

"I wanted to join Scouts BSA because my brother has been in scouting for a very long time and I've always loved the things he's done," said Brenna Tate, a 13-year-old member of Troop 4640. "I've always just wanted to go camping and, in general, learn about the outdoors."

"My brother is an Eagle Scout. My Dad is the Scoutmaster of his troop," said Cheyenne Bland, 16-year-old senior patrol leader for Troop 4640. "So I've watched them have fun and go camping. I was always like, man, I really want to do that. So when we found out that girls were allowed, I instantly was like, yes, I want to do this and I want to get my Eagle."

Since Troop 4640 formed in February, it has now grown to 17 members and many have started earning merit badges. The troop has also gone on five campouts.

"We actually have a trip planned next month to Brazos Bend," said David Albee, Scoutmaster of Troop 4640. "We've done some shooting sports. We've done a lot of camping."

"We got first in archery and first in Tomahawk throwing at the competition," said Tate. "So we made our mark there."

Most of the members of Troop 4640 say they hope to eventually earn the coveted rank of Eagle Scout.

"I really want to earn Eagle Scout," said Troop 4640 member Evia Rand. "It's a really big accomplishment and I want to get set a good example for my little brother, who is in Cub Scouts right now."