WABC
NEW YORK -- This performance isn't for fame, fortune, or even applause.

It's actually for the ignored, the forgotten, and those struggling with burdens many of us cannot even imagine.

"You see the homeless every day in New York City, you see it's a place where the poor and the rich are very close to each other and that juxtaposition really sticks out," said singer Will Boyajian.

Performing on subway platforms, Will Boyajian is using his voice and guitar to uplift the less fortunate throughout New York City, with a simple sign encouraging the homeless to take whatever money they need from his open donation case.

One young mother who didn't want her face shown is currently living in a shelter, and says the money she grabbed will help a lot with just getting through the day. 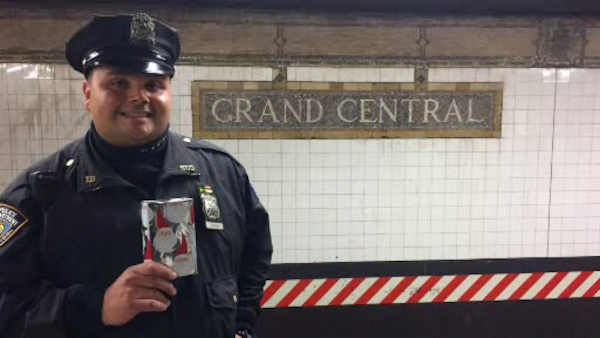 Officer buys socks for homeless man
Transit officer Frank Rendina spotted a homeless man rummaging through the trash at Grand Central, and offered to buy him socks as a Christmas present.

"I'm so broke so that kind of makes my day, I live one day at a time in the moment," she said. "I've never seen that ever in New York, I'm impressed and I think it's really sweet I felt like crying, it was really really nice."

"When I first started I expected everyone to just clear it out, I think we all kind of did, but I'm amazed that they'll take a couple dollars and say I want to make sure there's some for others," said Boyajian.

Boyajian says he can raise anywhere from $350-$400 in a couple hours, but the goal is to empty his case each day. If he has any money left after his performances, he hands it out or buys Metrocards to hand out, until his next encore.

"I think it's a blessing what he's doing, I've been in that situation before," said Xaxier Abreu. "I've been homeless before so you know it's a good thing."
Related topics:
societynew yorkcharityhomelesssubwaydonations
Copyright © 2020 WABC-TV. All Rights Reserved.
More Videos
From CNN Newsource affiliates
TOP STORIES