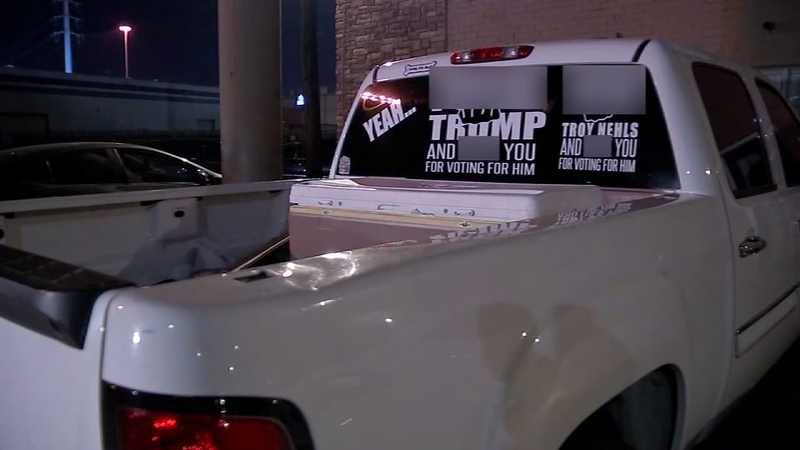 RICHMOND, Texas (KTRK) -- State Rep. Ron Reynolds spoke up today for Karen Fonseca, who he says has been going through a "nightmare" of backlash over her anti-Trump message on her truck.

Fonseca, who was arrested just before the weekend on an unrelated fraud warrant, earlier unveiled another decal on her truck's back window that says "F-Troy Nehls and F-You For Voting for Him." The message was placed right next to her existing decal criticizing President Trump.

Fort Bend Co. Sheriff Troy Nehls targeted Fonseca's pickup in a Facebook post. He posted a photo of the "F-TRUMP" decal to look for the driver.

In response to the new decal revealed Sunday, Nehls said, "It doesn't surprise me. Her behavior is disgusting."

On Monday, Reynolds called for Nehls to apologize to Fonseca, accusing the sheriff of using the decals as a statement for his own political ambitions.

Fonseca's teen daughters say they support their mother despite getting threatening, bullying messages from people online.

"My mom has always taught us to always stand up for what's right," said Larrissa Lev, who is 19 years old. "She raised us all the right way. We do take after her."

'F-TRUMP' driver says kids have been targets of bullies

When asked whether she could find middle ground with the sheriff, Fonseca told ABC13 that she has not spoken with him.

"We have not changed any words. We don't have a relationship," Fonseca said. "The thing is, I think he went about it the wrong way, exposing us on Facebook."

Fonseca bonded out of jail on the fraud warrant.

"We have to protect people's First Amendment right to free speech," Reynolds said ahead of the news conference. "A difference in political views does not give Sheriff Nehls the right to target citizens."

Reynolds is accusing Nehls of abusing his law enforcement authority.

Monday afternoon, the sheriff issued an extensive statement, included below in its entirety:

"The following is a summary as it relates to Karen Fonseca and the window sticker on her truck.

Last week, I received complaints from Fort Bend County residents regarding the window sticker on her truck, which states, "F*** Trump, and F*** You for voting for him." The residents informed me they were offended at the language displayed on the truck, and I asked for a photo. I received the photo of the truck with the sticker, but the photo failed to display the license plate number of the truck.

I asked my office to post the photo of the truck with the sticker on my "Sheriff Troy Nehls" Facebook page, and obscured the offensive language. The intent behind the post was to identify the owner of the truck with the intent on speaking with that person(s) and have a conversation with the owner regarding the complaints I received and a possible modification of the sticker. My post also included my office phone number.

The facts in this case as I see them are that Karen Fonseca wanted to place her feelings into the public realm by driving around with an obscenity on her vehicle. She got just that -- much public recognition. This recognition did not cause her to be indicted by a grand jury for Felony Fraud (this happened back in August of 2017), but it did bring the subsequent warrant to our attention and we did our job by arresting her.

In the beginning of this incident, I was hopeful that the person driving around with an obscenity for full view of all (including children) would be reasonable and would be willing to talk about coming to an agreed solution that satisfied her 1st Amendment rights while respecting the rights of parents and others offended by this display of an obscenity.

Having heard her talk in the public since the beginning of this, I am now quite aware that no such hope for a calm and reasonable discussion exists with her. This is sad and I hope that in the end she can come to see that just because citizens may have the legal right to do something, it does not always make it the right thing to do.

Neither I nor the Sheriff's Office will be issuing further statements concerning this matter as it relates to these now past events as it only serves to bring added publicity to this display of obscenity."
--Sheriff Troy Nehls