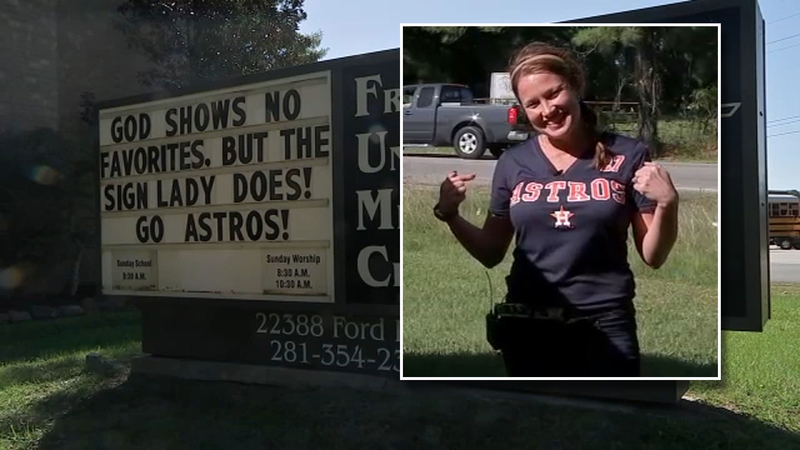 PORTER, Texas (KTRK) -- As the Astros fight for a championship, a church "sign lady" is using the opportunity to spread a message to fans.

For the past year, this has become routine for Chastity Beyer. The Friendship United Methodist Church member started playing around with letters after falling ill and needed a boost.

"I want to give inspiration to people," Beyer recalled. "I feel like God has called me to do this."

Beyer uses Sunday service as inspiration and lets her letters do the talking.

"I had one up here that said, 'Honk if you love Jesus,' and some other stuff," Beyer recalled. "There were a bunch of people honking."

Her latest creation may not have people honking, but it has them talking.

"I've talked to people from Minnesota," Beyer said. "From Kentucky. From Louisiana. So, it's all over the place."

After clinching a spot in the World Series, Beyer didn't need Sunday service for this week's inspiration. The latest message reads, "God shows no favorites, but the sign lady does! Go Astros!"


The message might be about the Astros, but Beyer she's there's a deeper meaning. God, she explained, doesn't play favorites, and she's so thankful fans across the country are seeing that.

"It's a beautiful thing," Beyer said. "It makes you feel absolutely wonderful."

God might be neutral, but Beyer isn't shy using her letters to tell everyone who she's pulling for.

The only dilemma now: how can she top this message if the Astros do take it all.

After Beyer's story aired on ABC13, and after the Astros dropped to an 0-2 deficit in the World Series, she came back with a new message.

KEEP THE FAITH: The Astros might be down 0-2, but @FriendshipUMC2’s “sign lady” believes a higher power will turn things around. The story behind her latest sign that’s inspiring #Astros fans across the country: #TakeItBack https://t.co/IJeUQKhrQQ pic.twitter.com/WzsDeOjpaO

The church is tapping into the excitement with a watch party Friday.

Another area church is also looking to a higher power to get the Astros some help.

Christ Church Cathedral on Texas Avenue hasn't just been praying for the team through the World Series run so far, it's also made sure Jesus has his own Jose Altuve jersey!

An Astros fan that the cameras couldn't get enough of in New York found himself at the World Series after his passion caught a player's attention.