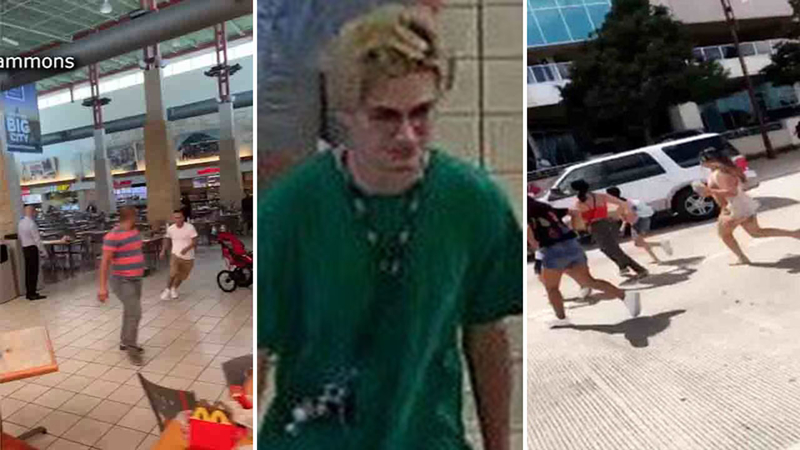 HOUSTON, Texas (KTRK) -- We're getting our first look at a man police call a person of interest in a weekend shooting scare at Memorial City Mall.

The new photo released by a mall spokesperson late Monday shows a man wearing glasses and a green t-shirt.

Have you seen this person? He is wanted for questioning in the incident at Memorial City Mall Sunday afternoon. If you know who he is or his whereabouts, please contact @CrimeStopHOU at 713-222-TIPS. You can remain anonymous. #hounews pic.twitter.com/K6INsjYB4J

Dozens of people returned to Memorial City Mall Monday to retrieve the items they left behind after a shooting scare over the weekend.

At first it appeared there was an active shooting, but officials say there was no shooter. It was also initially believed a man set off firecrackers inside the mall, but authorities later gave an update saying no fireworks were discharged.

Many at the mall at the time said they're still upset and nervous about the incident.

"It was too much frenzy, too much panic," said John Delva. "I was at work and all of a sudden everybody just started running in, and I just ran out."

In the confusion, Delva left behind his backpack and cell phone. Before he collected his belongings from security, he was not looking forward to going back inside the mall.

"I am still thinking about everyone running and panicking. Even though it was a day ago, it still feels fresh in my mind," Delva said.

Mall officials say even baby strollers were left behind. Anyone who needs to claim their things can go to the customer service desk inside the mall. You'll need to fill out a form to get your items.

Memorial City Mall will re-open today so people can come back to get items left behind after a shooting scare. Police say there was no shooter, but there was a reason for concern. pic.twitter.com/0oowJCoIVJ

Video shared with ABC13 showed the hundreds of customers who started running when they heard a possible shooter was on the loose near the food court.

During a press conference Sunday, Harris County Precinct 5 Constable Ted Heap said surveillance video shows the suspect at 3:12 p.m. going up the escalator to the movie theatre. A few minutes later, the suspect was seen wearing a red half-mask. He took the escalators down to the food court area, where he jumped on a table and declared he was going to kill himself.

"He had something in a bag, and at that point, he had thrown the bag. At this point, we have chaos. People started fleeing. He actually exited out the south entrance and headed in this direction over here towards these apartment complexes," Heap said.

Jessica Astello and her 10-year-old daughter had just finished eating and were about to go back-to-school shopping. She said she saw the man jump on the table and begin screaming in the food court.

"The next thing I hear is this guy in a mask, half red mask get on top of the table screaming out loud something," recalled Astello.

Astello said she grabbed her daughter's arm and ran out to safety.

"It was just like a superhero kind of mask," she described. "Half up here. It was half in the back. A superhero mask."

Deputies say they have numerous witnesses, but at this point, the suspect hasn't been found. Authorities describe him as a white male in his teens or early 20s.

Police consider this a terroristic threat.

Moments following the scare at Memorial City Mall, Houston police responded to reports of shots fired at a Walmart located at the 9400 block of W. Sam Houston Parkway South.