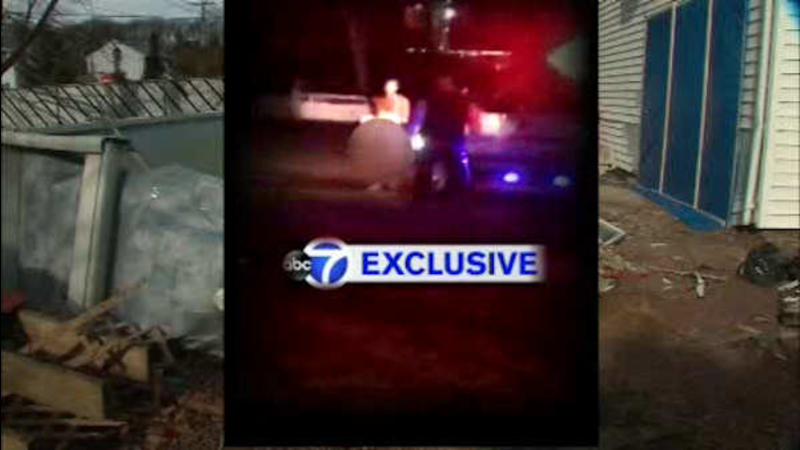 SHIRLEY, NY -- The driver of a car that crashed into a home on Long Island jumped out, took off his clothes and fled the scene late Thursday.

Suffolk County police responded to a home in Shirley around 11:30 p.m. after the car had been driven through two lawns -- destroying their fences -- before striking a deck and careening into the home on Ridgewood Drive.

The deck collapsed into the pool, and water from the pool flooded the house.

The man exited the vehicle, got naked and ran, police said.

"There was a big boom, come running downstairs, look in the kitchen," homeowner Ron Sandolo said. "There's a car in my kitchen. I yell, 'Is anybody in there?' He says, 'Yeah, I'm alright though.'"

The man reportedly hopped a high fence on the property, despite the fact that he had driven a large hole straight through it.

"He started taking his clothes off," neighbor Stephanie Dinis said. "We're thinking it was because he was wet from the pool, because the whole roadway was flooded with the pool water."

"My brother said he saw him take his clothes off, and then he was ringing people's doorbells," Dinis said. "And why he hopped the fence instead of run through the big hole he made, I dunno. That fence is pretty hard to hop. My brother said he cleared it."

Suffolk police took him into custody a short time later, and he was taken to Brookhaven Memorial Hospital Medical Center in East Patchogue.